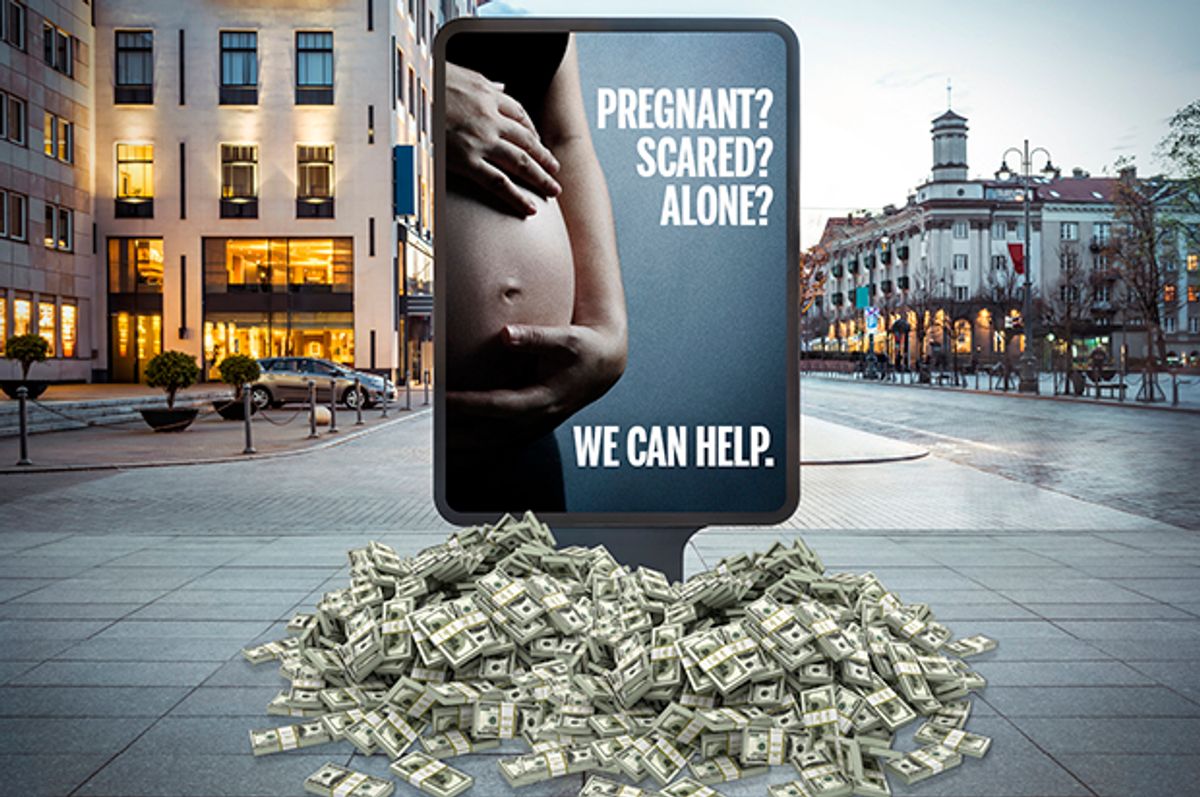 Real Alternatives, an anti-abortion group that receives millions of dollars a year from the state of Pennsylvania, claims to be an "ethical and upright" organization dedicated to values like "trust, responsibility, and accountability." That high-minded rhetoric is being sorely tested this month, however, as the organization not only refused to open its books to the state's official auditors, but sued the Pennsylvania auditor general, Eugene DePasquale, rather than submit to an investigation about what happened to nearly $1 million the state gave Real Alternatives.

“We do 5,000 audits a year," said DePasquale in a phone conversation. "Obviously they run the gamut from small to big, and this is the first time I’ve been sued by anybody to say we didn’t have a right to to do the audit."

Real Alternatives is the umbrella organization behind a chain of crisis pregnancy centers, which are set up to lure in women who have an unintended pregnancy so as to dissuade them from choosing abortion. Crisis pregnancy centers generally work by imitating medical clinics, even though they offer little to no medical care, in the hopes that unsuspecting women seeking medical care may be confused over the distinction.

Pennsylvania auditor general is seeking to examining the books of Real Alternatives since the organization received a $30 million, five-year contract with the state, supposedly to help pregnant women choose to give birth rather than abort. Real Alternatives uses the grant money to reimburse subcontractors for providing broadly defined services to women with an unintended pregnancy — mostly "counseling," which is to say anti-abortion lectures, and in some cases, help in trying to sign up for food assistance or public housing.

DePasquale charges Real Alternatives of using accounting tricks in order to keep some of the grant money for itself. He claims Real Alternatives has been charging subcontractors a 3 percent fee on all reimbursements, which, if true, would mean that the organization is skimming off a portion of state funds and spending it on unknown projects.

Admittedly, a 3 percent fee sounds like a small amount, but DePasquale charged in a press release that it amounts to "$906,000 of taxpayer money for which there is zero accountability."

In response to DePasquale's accusations, Real Alternatives put out a press release claiming that the money in question comes from "other corporate contracts using private funds" and accusing DePasquale of "attempting to audit expenses related to Real Alternatives’ non-government, private contracts expenses using private funds." When Salon called the organization, we got a recording referring all journalists to this public statement.

It seems as if the question of where this money has come from and how it's being spent could easily be resolved by Real Alternatives opening up its books and letting Pennsylvania's audit be completed. Instead, Real Alternatives is suing to prevent just such an audit from happening.

“It wasn’t like we were going to their office with baseball bats looking for this," DePasquale said. “This was not necessarily high on our radar screen, right up until they decided to sue us so we couldn’t see it. Now I’m convinced there’s something there.”

DePasquale said that the State Department of Human Services asked for the government audit after pro-choice activists and journalists repeatedly raised concerns that the organization was deceiving women it claimed it was trying to help.

In 2015 Cosmopolitan published a yearlong investigation of crisis pregnancy centers that found, for instance, that Real Alternatives "relies on debunked studies that imply abortion leads to breast cancer and clinical depression" in order to bully women out of having abortions.

“It’s outrageous that any taxpayer dollars are given to organizations that deliberately mislead and harm women," said Vicki Saporta, the head of the National Abortion Federation, a medical association that advocates for abortion providers and sets industry standards for quality abortion care.

Concerns aren't just being raised about the allegedly deceptive practices at Real Alternatives. Many observers object to state money being spent on vaguely defined "counseling" rather than on more substantial investments in the well-being of women and their children.

“State governments would be much better off spending taxpayer dollars on organizations like Planned Parenthood that provide legitimate health care services, services that actually protect women’s health and save women’s lives," Saporta argued.

Women who show up at Real Alternatives can receive a free pregnancy test in exchange for hearing a 20-minute presentation on the evils of abortion. What they won't get much of, however, is material help.

Government money funneled into crisis pregnancy centers "is not going toward the things expectant women need: accurate health information, medical care, and long-term support in raising children," explained the Cosmopolitan report, written in conjunction with the Investigative Fund at the Nation Institute.

"According to Real Alternatives' contract with the state, it reimburses a [subcontracting] center just $2 each time a woman receives food, clothing, or furniture — a maximum of four times," Cosmopolitan reported. But there's "a $24 cap for an individual pregnant woman's material needs."

This is particularly troubling when one considers that the state money is coming from the budget for Temporary Assistance for Needy Families (or TANF). As the name would indicate, that program is supposed to be a welfare program to assist families in need. But unlike Aid to Families with Dependent Children, the New Deal-era program it was created in 1996 to replace, TANF doesn't necessarily directly give money to needy people.

States can use TANF funds "much more broadly than the core welfare reform areas of providing a safety net and connecting families to work," according to Center for Budget and Policy Priorities' website. Some states "use a substantial share of funding for these other services and programs."

The Real Alternatives program in Pennsylvania is an extreme example of what happens when conservatives are allowed to spend anti-poverty funds on "counseling" programs, instead of giving financial assistance directly to people in need.

It's difficult to consider Real Alternatives an anti-poverty program since its only real goal is to talk women out of having abortions. As the $24 cap on material assistance suggests, direct poverty alleviation is virtually nonexistent. Counselors may help women sign up for food assistance or Medicaid, but paying subcontractors to tell women how to find government money is a far less efficient use of funds than simply writing women checks directly. That's doubly true in an era when an internet search engine can help women sign up for programs directly, leaving no need for them to interact with anti-choice ideologues at all.

Real Alternatives doesn't even offer any real help in preventing an unintended pregnancy, as the centers are not allowed to advise women on contraception. Instead, its website vaguely alludes to "modifying risk-taking behavior," which is a conservative euphemism for promoting abstinence, even though research has shown that more than 99 percent of sexually active women use contraception at some point in their lives.

As DePasquale emphasized, his job is not to determine the wisdom of how the state spends TANF money, so long as the fund recipients stay within legal bounds. His concern is that Real Alternatives is violating its grant contract.

“Whether I agree with your ideological mission or not," he said, “my job is getting what we are paying for, as taxpayers. I can’t make sure of that if I can’t look at these books.”