With health care bill scuttled, Trump and Ryan gear up for revenge 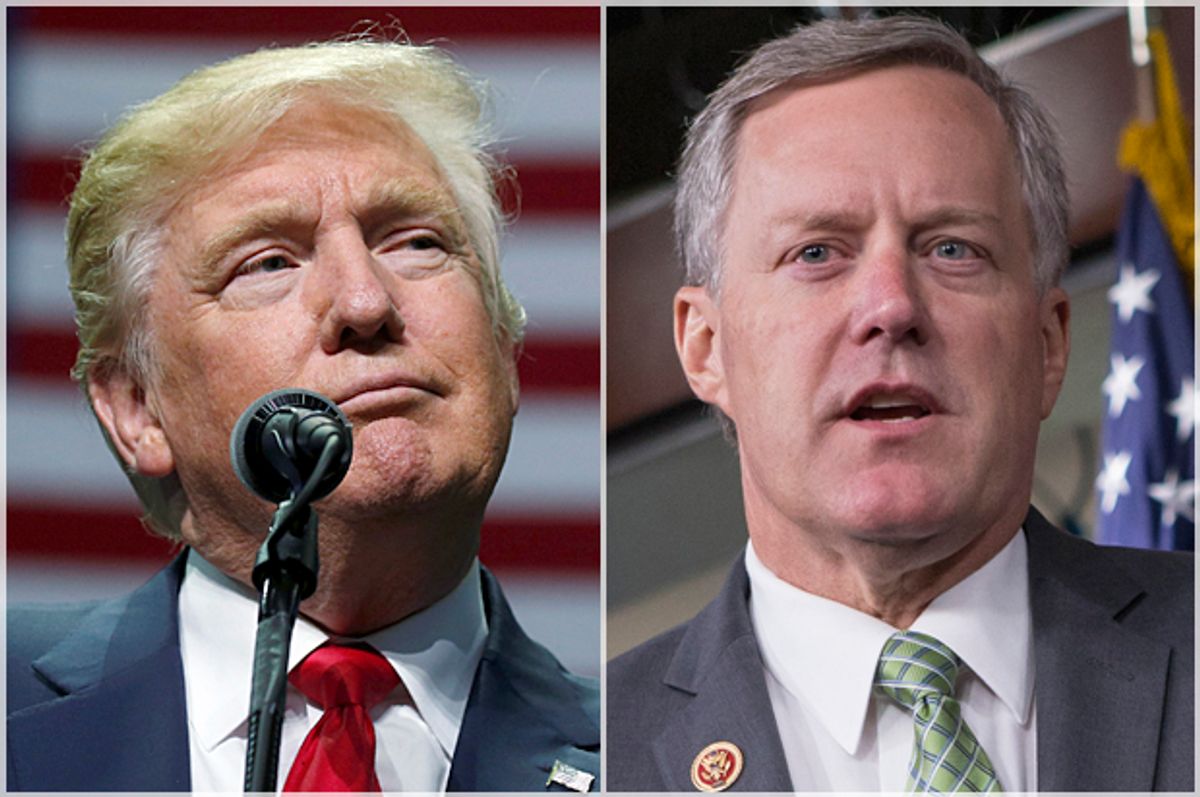 Whether consciously intended or not, every group effort has its own ethos. For decades, the guiding principle of Donald Trump’s leadership style has been loyalty — to his enterprise and above all to him personally.

The far-right Republicans who comprise the Freedom Caucus in the U.S. House of Representatives are about to learn this lesson the hard way, once the dust settles on the American Health Care Act, the joint effort of Trump and Speaker Paul Ryan to repeal and replace Obamacare.

The House of Representatives was scheduled to hold a vote on the bill early this afternoon but canceled those plans after it became evident that the GOP did not have enough votes for it to pass. This was the second time the leadership team had to scuttle a scheduled vote on the AHCA. The House was originally supposed to vote on it Thursday, the seventh anniversary of the signing of the Affordable Care Act, the signature legislative achievement of former president Barack Obama.

GOP leaders saw support for the bill continue to collapse on Friday and accused Freedom Caucus members of trying to shift the goalposts of what they claim to want in the final version of the health care law.

Some Freedom Caucus members pushed the White House to insert provisions that would remove many of the most popular elements of the Affordable Care Act passed by Congress in 2010, including regulations that prohibit insurance companies from refusing customers based on pre-existing medical conditions and a rule that allows adults under age 26 to remain on their parents’ insurance policies.

Ryan and the Trump administration were willing to add several Freedom Caucus amendments to the AHCA package, but they saw the latest requests as going too far.

Instead of dragging out negotiations with the Freedom Caucus and more moderate Republicans fearful that the AHCA will cause millions of people to lose their health coverage, President Trump instead directed Ryan to make the Friday vote the last one on the issue.

The administration vowed that if the bill failed to pass, the Trump team would move on to other priorities.

It is more than apparent that the Trump administration views Republicans who led the effort to scuttle AHCA as guilty of betrayal.

“I’m gonna come after you, but I know I won’t have to, because I know you’ll vote yes,” Trump is reported to have said to Rep. Mark Meadows of North Carolina, the leader of the Freedom Caucus, at a Tuesday meeting when he and other GOP leaders tried to cut a deal. He was only partially joking.

“Honestly, a loss is not acceptable, folks,” the president added.

That rose was followed by an arrow directed at Meadows and his recalcitrant colleagues.

That second tweet referred to a provision of the AHCA, which would block Planned Parenthood from receiving federal funds as long as it provides abortion services.

Meadows seems to be aware of what might happen if the House didn't go along with the administration’s proposal. On Thursday he told reporters, “I'm desperately trying to get to yes” on the AHCA.

This isn’t the first time that Meadows and the Freedom Caucus have been willing to strike at top Republicans. In 2015 during just his second term of office, the North Carolina congressman led a successful coup against House Speaker John Boehner of Ohio after he filed a resolution to remove him as the GOP’s leader in the chamber. Freedom Caucus members also played an important role in forcing the Republicans to shut down the government in what became a doomed bid to remove the funding for Obamacare in 2013.

Even if Meadows and the 40 or so members of the Freedom Caucus (the group refuses to release a roster) were completely sincere about wanting to make a deal with the president, their ability to compromise is limited. Thanks to redistricting and the "demographic sorting" that has led more Democrats and liberals to live in urban areas, the only real re-election fear that many House Republicans face is a potential primary challenge from the extreme right.

Some Republican legislators have also been feeling pressure from the massively funded operation erected by Charles and David Koch, the billionaires who head up a network of far-right GOP donors which strongly opposed the AHCA.

Even if Speaker Ryan and the president had managed to get their way on the bill in the House, however, it is unlikely that they would have forgiven the Republicans who refused to go along. That’s especially true since many Freedom Caucus members have co-sponsored prior legislation that was not significantly different from the AHCA’s initial form. All of them who served in the last Congress voted for such bills as well, even though those proposals, like the current GOP offering, did not completely "repeal and replace" the Affordable Care Act.

With the bill withdrawn from consideration and its fate unclear, retribution is almost certain to come for congressional Republicans who defy the White House’s wishes.

“Inside Trump world, everyone is constantly in fear of losing their jobs,” said one person with inside knowledge of administration culture. “These people have no idea what’s going to happen to them if the health care bill goes down.”

According to interviews with White House officials and former senior Trump campaign staffers, many people within the administration are eager to exact retribution on Republicans they perceive as disloyal.

During last year’s GOP primaries, many high-level Trump officials viewed the prospect of defeating the far-right conservatives who backed his former rival Ted Cruz with outright glee. They believed that most Washington-based conservative policy and activism groups are primarily interested in lining their own pockets.

“These groups don’t say and do the things they do out of principle,” said another source who is familiar with Trump’s thinking. “They do it because they’ve managed to convince a bunch of rich old men that the impossible can be achieved. They want to lose because it’s good for their bottom line.”

Many in the Trump White House continue to share these opinions. That includes more conventional Republicans and also an influential faction within the administration who formerly allied themselves with the House Freedom Caucus but who increasingly believe that conservatives on the far right have no ability or desire to actually govern.

This second faction, which seemingly includes Trump’s chief strategist Steve Bannon, isn’t exactly moving toward the political center. It may, however, be moving closer to a third faction of administration moderates clustered around Trump’s eldest daughter, Ivanka, her husband, Jared Kushner, and his top economic adviser Gary Cohn.

Bannon and other White House officials have been reported to be compiling a "shit list" of Republicans who don't fall in line on AHCA.

It’s unclear where this rapprochement between the moderates and the disaffected conservatives will lead in the future. One possible clue can be discerned from the relationship that John Boehner developed with Democrats during the latter part of his speakership in 2015. Long stymied by the Freedom Caucus and its extreme tactics, Boehner eventually began reaching out to House Minority Leader Nancy Pelosi and her lieutenants. Together, they succeeded in blocking several other government shutdown attempts. Democrats also helped Boehner preserve funding for Amtrak, which many conservatives were eager to shut down.

After Meadows filed his motion to depose Boehner as speaker, several Democratic members even suggested they might vote to support Boehner, although it never came to that.

“This stuff disrupting the business of the country, I’m not for it,” one of Pelosi’s top lieutenants, Rep. Jim Clyburn of South Carolina, said at the time. “He’s the elected speaker; I’m not going to vote to vacate the chair.”

It’s unclear whether Democrats would be willing to help Trump on anything, given the numerous outrageous accusations he has leveled at them. But in terms of legislative accomplishment, the White House may find it easier to deal with some Democrats than with the GOP’s far-right fringe.

Regardless of how the administration resolves its internal conflicts and its dealings with Democrats, it appears likely that the White House and other top Republicans will seek retribution on members who refuse to go along with Trump’s goals.

Political observers got a preview of things to come on Thursday after the Congressional Leadership Fund, the political action committee overseen by Speaker Ryan, announced it would no longer provide financial support to Rep. David Young, an Iowa Republican who opposes the GOP's new health care bill. The group spent nearly $2 million helping Young last year and even opened an office in the Des Moines area to assist him.

Removing support from recalcitrant GOP members is likely to be popular with other Republicans in Congress but also among rank-and-file Republicans. Despite Trump's low popularity overall, a recent Quinnipiac University survey reported that the president received an 80 percent job approval rating from Republican respondents.

In short, the Republican civil war that raged until the party's national convention last summer is not over. It's about to return with a vengeance.

This is a developing story. It was last updated at 4:10 pm ET.