Ivanka’s West Wing office and Chelsea’s Power of Women honor? Being born to wealthy parents can do wonders for your career

This pair of Manhattan socialites born into privilege want to come off as relatable women: I don't think so 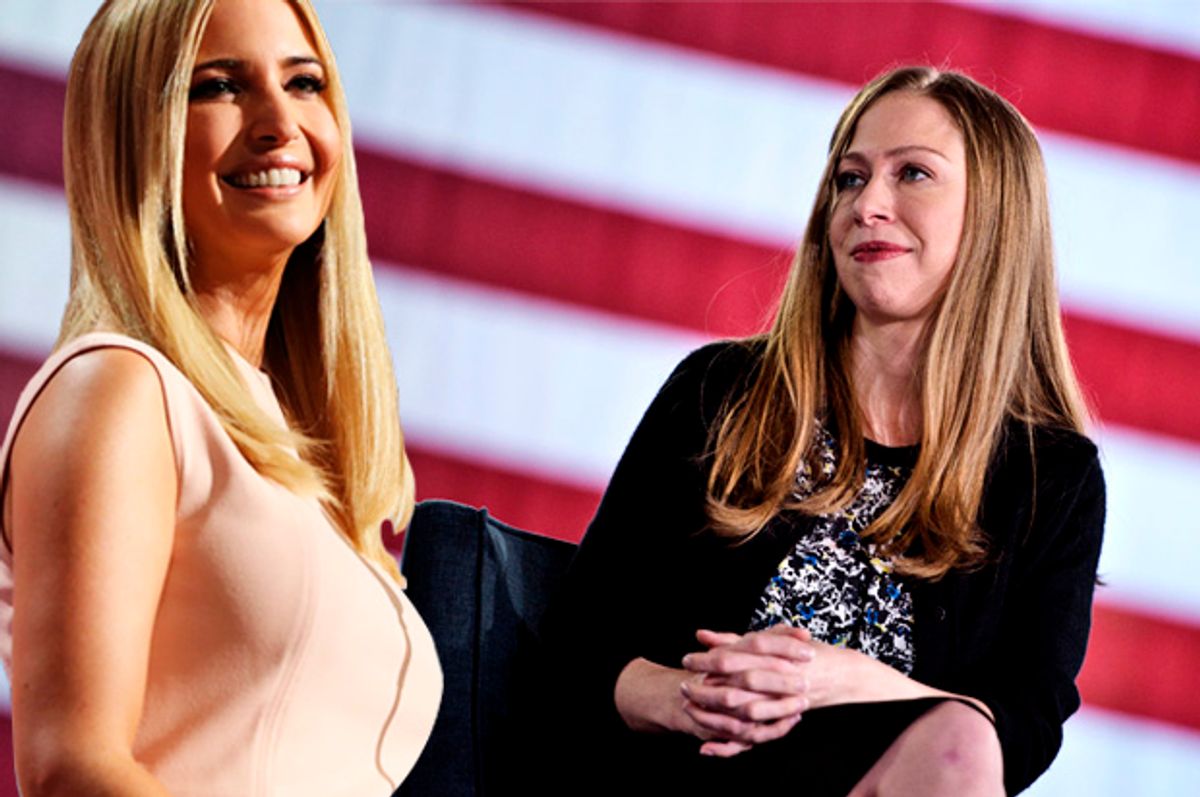 Just a couple of months ago, Ivanka Trump was adamant she was not angling to replace Melania Trump as first lady.

Well, folks, looks like that was all a ruse, because Ivanka seems to have nabbed that job — with some extra privileges on top.

But why be the president’s daughter if you’re not going to use it to get a few extra perks?

Like, I don’t know, a West Wing office and security clearance, for example. No biggie. I mean, what with all of her experience selling apparel and appearing on "The Apprentice," it’s like she was born for it.

OK. I don’t mean to sound catty — and my intention is not to diminish Ivanka’s genuine personal achievements. She’s clearly a smart and capable woman, regardless of her parentage.

But, come on. This is like Bring Your Kids to Work Day gone severely wrong.

Ivanka’s growing visibility and role within the Trump White House is not only riddled with ethical questions and conflicts, it’s also just plain embarrassing. I’m pretty sure what I’m actually feeling when I see pictures of Ivanka sitting beside Angela Merkel or the Japanese prime minister is second-hand embarrassment. Or, rather, the embarrassment Ivanka should be feeling if she had the adequate self-awareness to know how ridiculous this looks.

But she doesn’t and she’s not going anywhere, so let’s not waste any more time mulling over the absurdity and cringe factor in all of this.

Apparently, Ivanka wants to be an advocate for women. She wants us all to know the importance of women having “a seat at the table” — and while that’s well and good, the message she’s sending right now is that it’s a whole lot easier to nab a seat at the table if you’re already wealthy and connected.

Ivanka is fundamentally incapable of relating to the average American woman. She will never be affected by the issues that affect millions of other women. That’s not her fault. It’s just the way it is. It’s her responsibility to recognize that and to work hard to make up for it — to show she is taking her role (whatever it is) seriously, doing her homework, talking to women from all backgrounds and income brackets and showing genuine understanding and compassion — and then speaking out when it matters.

Yet at the first opportunity to show she cares — when Republicans were trying to appease far-right conservatives by promising to remove maternity coverage from Trump’s doomed Obamacare replacement bill — Ivanka went skiing in Aspen.

If Ivanka wants to be taken seriously, she should start by making her intentions clear. As it stands, her opinions on women’s issues remain as murky as the definition of her new role. If she’s just going to sit around for four years calling herself an advocate for women, while silently appeasing her father at every turn, that’s really not going to cut it for women who actually care about the issues.

Her "Women Who Work" initiative won’t cut it either. A single mother who is working three jobs to feed her kids doesn’t want to see Photoshopped images of a flawless Ivanka balancing a baby on her knee while pretending to work. It’s not real and it’s not relatable.

Whether Ivanka deserves the role or not is one thing. It’s up to her to decide whether she will actually earn it.

Meanwhile, elsewhere in the land of privileged political offspring, Ivanka’s bestie Chelsea Clinton, who is 37 years old, is to be an honoree at Variety magazine’s Power of Women: New York event next month.

Chelsea, who is vice chair of the Clinton Foundation — an organization founded by her famous parents — will be honored “for her work with Alliance for a Healthier Generation, which empowers kids to develop lifelong healthy habits.”

What is it with these people and their tendency to be struck by severe bouts of tone-deafness?

This Chelsea, who famously declared that she doesn’t “care about money” is also the Chelsea who had a $3 million wedding, owns a $10 million apartment in Manhattan, serves on the boards of major companies earning hefty retainers, married an investment banker, made $600,000 a year for appearing as a “special correspondent” on NBC a handful of times and landed a $120,000 job on Wall Street fresh out of college. Somewhere in the middle of all that, her mother Hillary Clinton declared that the family had been “dead broke” when they left the White House.

It’s not Chelsea or Ivanka’s fault that they were born to wealthy and powerful parents. That kind of life comes with its own challenges; knowing — ahem — for example, that no matter what you ever do, some snarky columnist will probably say it’s only because of who your parents are.

The problem is not that Ivanka and Chelsea are wealthy and privileged. That kind of privilege can be put to real good. The problem is that they routinely behave as though, through their own persistence and grit, they’ve finally reached the top after decades of blood, sweat and tears.

Because of that, their efforts to seem like normal, relatable women consistently come off as embarrassing failures.