Free speech vs. safe spaces: Are conservatives "special snowflakes" when it comes to discourse they don't like?

Who's more tolerant of dissenting views: liberals or conservatives? 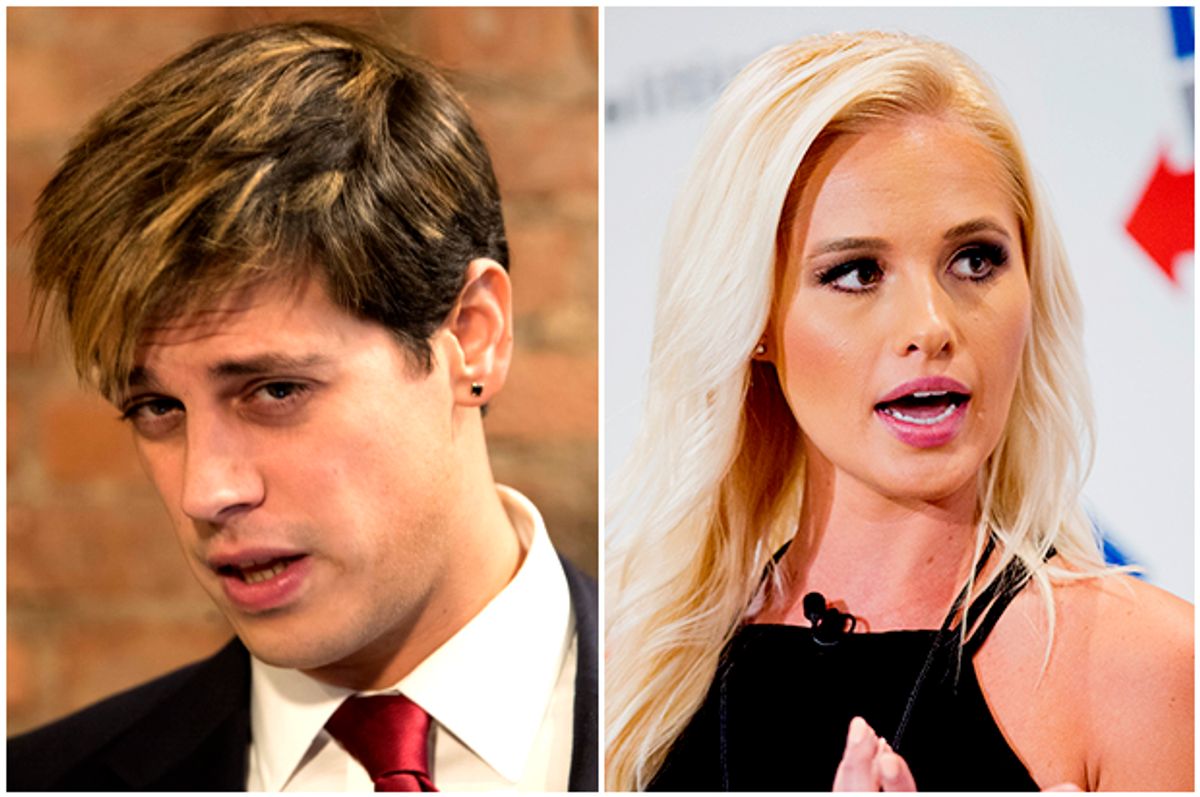 You hear it all the time from conservatives: The left must remember to tolerate dissenting opinions. But if you've followed the news cycle recently, you may have noticed that it hasn't been the left imposing social penalties on its members for expressing controversial opinions recently. It's been the right.

Tomi Lahren formerly of The Blaze, who was once hailed as the second coming of Ann Coulter, is now fighting to retain control of her Facebook page after being unceremoniously dropped for daring to express a pro-choice opinion. Meanwhile Milo Yiannopoulos formerly of Breitbart — whom the right once claimed to venerate because of his willingness to flout the taboos of discourse — was toppled last month when it was discovered he had once seemingly condoned ephebophilia.

So what gives? Why are members of the left regularly denounced as "special snowflakes" when the right just took down two of its highest profile pundits for daring to stray from the ideological reservation?

"Both ends of the political spectrum can be vociferous defenders of speech with which they agree, but are sorely tested when speech offends them," said Ken Paulson — president of the First Amendment Center and dean of Middle Tennessee State University's College of Mass Communication, as well as former editor-in-chief of USA Today. "America became a great country in large part because everyone could share an opinion, and over time, the best ideas forged our nation. Today everyone is free to speak, but where's the value if no one is willing to listen?"

"The First Amendment protects insightful ideas, but also stupid, insensitive, hateful and deeply offensive speech,"Paulson added in an email. "There's no cherry-picking the right to speak."

"I call it the dissonance between the ideal and the real," Hudson told Salon in an email. "The ideal is that we support free speech; we tolerate and even encourage opposing viewpoints. The real is that we despise contrary viewpoints and take measures to silence them; we fail to adhere to the essence of the First Amendment — our blueprint for personal liberty."

"Liberals and conservatives both suppress speech," Hudson concluded. "Neither side has a monopoly on it. Censorship is as common an impulse as sex. What we need is a greater commitment all across the political spectrum to accept and listen to speech that we don't like."

The Foundation for Individual Rights in Education, or FIRE, was able to back up Paulson's and Hudson's observation about both sides suppressing dissent by citing their own experience. In an email to Salon, Senior Vice President of Legal and Public Advocacy Will Creeley described having to stand up for speakers from right-wingers like Milo Yiannopoulos to left-wingers like Bill Ayers, and that they have had to defend student activists regardless of whether they are promoting pro-LGBT or anti-abortion positions.

"Unfortunately, there are many more instances of students, administrators, and lawmakers from across the political spectrum calling for censorship of speech they dislike," Creeley wrote. He also pointed out that "a great deal of campus censorship defies simple political labels. For example, we’ve stood up for the rights of students seeking to discuss thoughts of self-harm with friends, stage artistic installations that explore institutional ties to slavery, promote animal rights, and criticize former Presidents Barack Obama and President George W. Bush simultaneously."

In the opinion of this writer, Hudson's final sentence — that we need "a greater commitment all across the political spectrum to accept and listen to speech that we don't like" — speaks to the heart of this issue. When right-wingers silenced Lahren for being pro-choice or Yiannopoulos for being blase about sexual abuse, they came up with rationalizations as to why the expression of those views was somehow beyond the pale, just as the 40 percent of American millennials who were willing to support government suppression of bigotry against minorities no doubt had rationalizations for why that form of censorship would be okay.

The point here is not that one has to agree with Yiannopoulos or racial bigotry or Lahren's perspective on abortion. It is that, regardless of whether one agrees or disagrees with those perspectives, it is essential for a free society worthy of the term to practice free speech as well as preach it.

"I don’t agree with what you say but I will defend to the death your right to say it.”