Jared Kushner: Force of order and moderation in the White House? Or central player in latest Trump spin campaign? 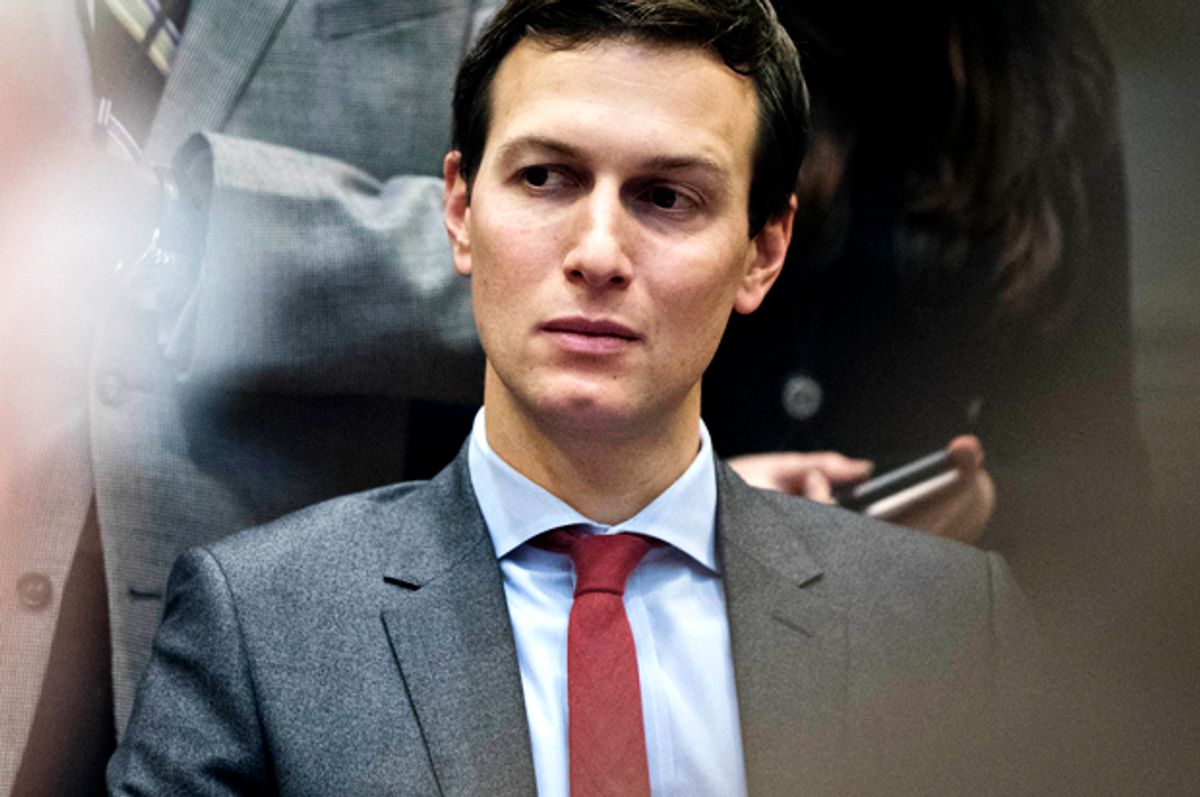 Over the weekend Politico ran a story examining the influence in the White House of Trump son-in-law Jared Kushner. Among the nuggets buried in the profile were the following:

1. Kushner “spends his days . . . pacing the Oval Office with Trump,” which makes him sound like a nurse keeping tabs on a dementia patient to make sure he doesn’t hurt himself.

2. The 36-year-old son-in-law “frequently” is the last person Trump speaks with at night.

3. Kushner has a tendency to walk in and out of meetings at random, a habit that might be understandable given his vast number of alleged major responsibilities, but one that has made it harder to bring order to an administration in desperate need of it.

The piece also reported that Kushner is “frustrated” with the administration’s early stumbles and would like to see fewer ideologues and “zealots” in the West Wing. To that end, he is working on a plan to “improve the White House,” which he wants to present to Trump around the 90-day mark of his presidency, in less than three weeks or so.

What those improvements would look like are hard to imagine. One would think that giving Jared Kushner fewer responsibilities so that he’s not stretched thinner than Plastic Man might be a good start. It would also be completely out of character for this president, who has long relied on his closest family members to take on major roles in running his empire.

And when it comes to the people who work for him but aren't related by blood or marriage, they are often relegated to one of the competing power centers of executives that Trump sets up while he hovers above it all, as the great leader whose favor everyone is currying. His White House has been no different. There has been the hard-line nationalist wing exemplified by Steve Bannon versus the more traditional conservative Republican wing represented by chief of staff Reince Priebus. Despite Bannon and Priebus proclaiming themselves as surprisingly happy to work together, the fighting between their subordinates has been a constant subplot playing out in the political press over the last few months.

The clashes between these two competing groups have provided the juiciest leaks for fans of political palace intrigue stories. The place is by all accounts riven by battles between these competing power centers, egged on by assaults from right-wing media outlets, which are policing the administration’s ideological purity and throwing fits if it inches even a millimeter to the left. The constant leaks to outlets like Breitbart and more mainstream organizations — like, well, Politico — have resulted in a toxic workplace where people spend more time worrying about their position in the Trump orbit or a colleague stabbing them in the back than they do about work.

All this drama means a fractious White House that has careened from one crisis to another for 10 weeks, barely able to stay out of its own way. This also means it has a poisonous relationship with Capitol Hill, even with members of the Republican caucuses there. So Trump’s legislative agenda, to the extent he even has one, is already in peril.

Which brings us back to Jared Kushner, by all accounts a man of mediocre intellect but towering ruthlessness and a thirst for revenge that Edmond Dantès would find a little much. Besides marrying a Trump, Kushner is mostly known for buying a respectable New York newspaper and nearly running it into the ground. People who have worked for him have been less than complimentary about his management skills and his vision.

Yet according to Politico, Kushner recognizes that his father-in-law’s administration has been hamstrung by managerial chaos and is now working on a plan to fix it. These fixes, Kushner is said to believe, will require sidelining or outright getting rid of some of the more zealous and ideologically driven figures in the White House — even though Trump, despite the image he built on “The Apprentice,” is allegedly conflict averse when it comes to firing people.

Is this believable? Or is this leak designed to reassure nervous allies outside the White House that while things might seem crazy, there is a plan to fix it — even if no such plan really exists? After all, Kushner and the rest of the president’s inner circle are not people who have shown great facility for smooth management before, and when you are running the White House, everything becomes magnified by the pressure of constant scrutiny.

It seems doubtful that the Trump White House is capable of making the wholesale changes it needs to get up and running smoothly. For a president who is almost exclusively obsessed with his own image, however, pretending that a fix is coming any day now might be enough to keep at bay his reported rage and brooding over the craziness that has attended him since Jan. 20 — at least for a while.