Was an inexperienced media hack outmaneuvered by veteran Washington operators? Seems like it 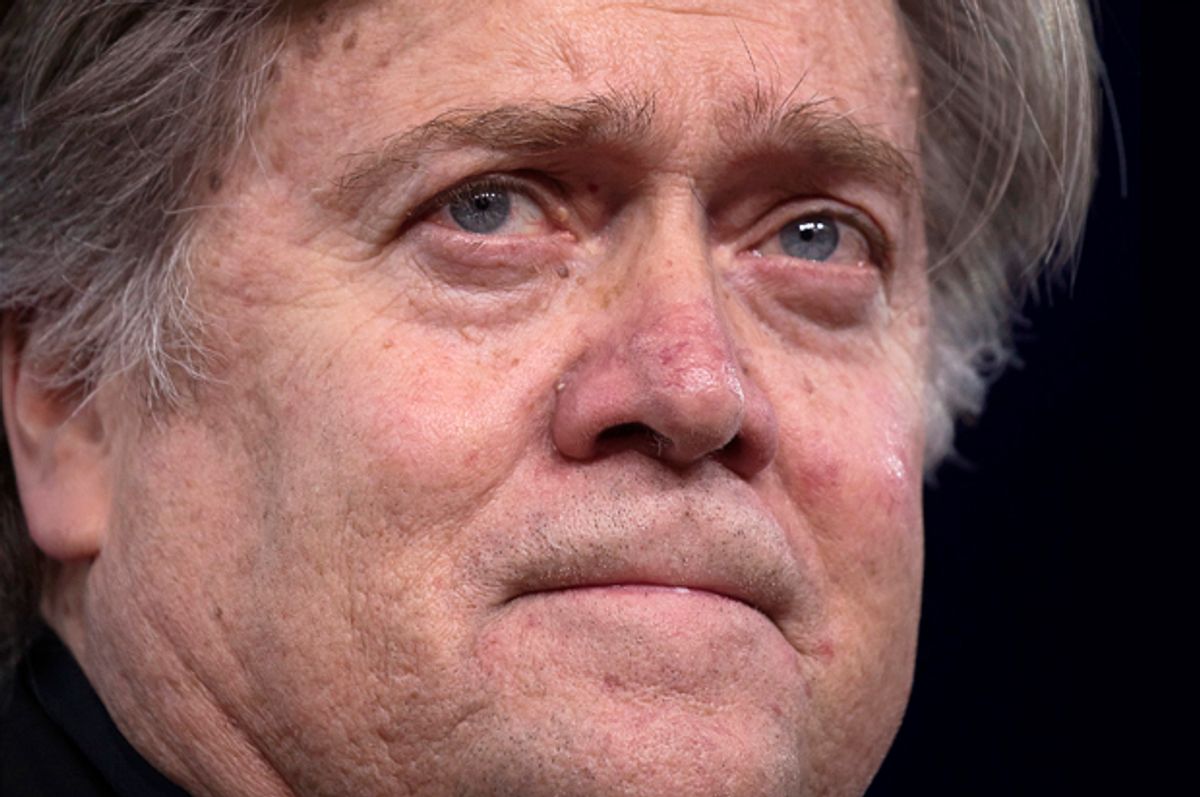 The removal of Steve Bannon from the National Security Council was first revealed in the capital’s dullest publication, the Federal Register, and explained in the country’s most influential conservative newspaper, the Wall Street Journal. The register published an executive order from President Trump, giving full control of the National Security Council to National Security Adviser H.R. McMaster. The order shows every sign of having been written by McMaster himself. In the Journal, Bannon resorted to spin, explaining his demotion as a planned success, part of his master plan to save the NSC from White House demon du jour Susan Rice.

"Susan Rice operationalized the NSC during the last administration," Bannon said. "I was put on to ensure that it was de-operationalized. General McMaster has returned the NSC to its proper function."

In this case, dull reality matters more than political spin.

McMaster now has control of the NSC agenda, which is to say he has control of the policy options presented to the president, and Bannon does not. Of course, Bannon is still a trusted adviser and still attends NSC meetings. But he will have a lot less influence over what Trump sees, especially in a crisis.

Which is why Trump’s allies are worried. WikiLeaks wonders if this is a CIA victory.

The empire strikes back? Steve Bannon ("Counsel to the President") off NSC Principal's Committee and CIA Director on https://t.co/l82TaCOqwn

Michael Flynn Jr., son of the ousted NSC adviser whose conspiratorial ravings disqualified him for a Trump administration job, senses a White House failure of nerve.

Fact 1: Flynn/Bannon most loyal to DJT (both out at NSC)

Is WH serious abt defeating our enemy? https://t.co/XkzfHJRksx

Flynn is correct that McMaster doesn’t like to use the term “radical Islamic terrorism.” But is WikiLeaks right that the CIA “empire” has struck back at Trump/Bannon because of their hostility to the U.S. intelligence community? Is Bannon’s defenestration the revenge of the so-called Deep State?

I don’t think so, for three reasons.

First, the fact that the CIA now has Bannon’s seat on the principals committee means that Trump’s CIA director Mike Pompeo will have a place at the most important meetings, instead of Trump's chief propagandist. That’s a net plus for the agency as an institution, but not a huge one, nor a new one.

Second, this move was publicly announced and attributed to a specific government official, McMaster, in an open government publication. The presidential order doesn’t signal any new encroachment of secretive national security agencies on the powers of the Madisonian government (meaning Congress, the White House and the courts). If there is a “Deep State” of unaccountable U.S. decision-makers, it does not announce its work in the Federal Register.

Third, there is another, simpler explanation: Bannon was simply outwitted by more experienced Washington operators.

McMaster made clear to Trump he wanted authority and Trump, a graduate of military high school who avoided the draft, has no ability to stand up to him in a face-to-face meeting. Ditto for Bannon, who served in the Navy three decades ago and has had no national security experience since.

David Rothkopf, author of two histories of the National Security Council and publisher of Foreign Policy magazine, said McMaster’s success is a "sign of a smart, effective bureaucrat and leader. This restores the traditional structures to the NSC. It is putting in place a professional team of national security advisers. It gives McMaster more authority and restores the roles of the military and intelligence leadership.”

McMaster did not act alone. Gen. Joseph Dunford, chairman of the Joint Chiefs of Staff, recently took Trump’s son-in-law Jared Kushner on a trip to Iraq as part of a Pentagon charm offensive. And Secretary of Defense James Mattis has been wooing the White House and tutoring out-of-his-depth Secretary of State Rex Tillerson.

"Two officials said that both Mattis and Dunford have spent a considerable amount of time meeting privately with the commander-in-chief, who graduated from military school as a teen but never served, to discuss a range of issues facing the armed forces. They declined to provide further details. Dunford and Mattis have also invited White House advisers to high-level meetings in the Pentagon, said the officials, who were not authorized to speak publicly."

Not coincidentally, Politico reports that Kushner “has asked searching questions — sometimes for hours — of inside and outside advisers about the White House's performance and complained about Bannon in particular, according to people who have spoken with Kushner.”

In particular, Kushner “has told people that Bannon’s desire to deconstruct the government, is hurting the president.”