The Obama administration created a program to make sure forensic science is reliable. Sessions killed it 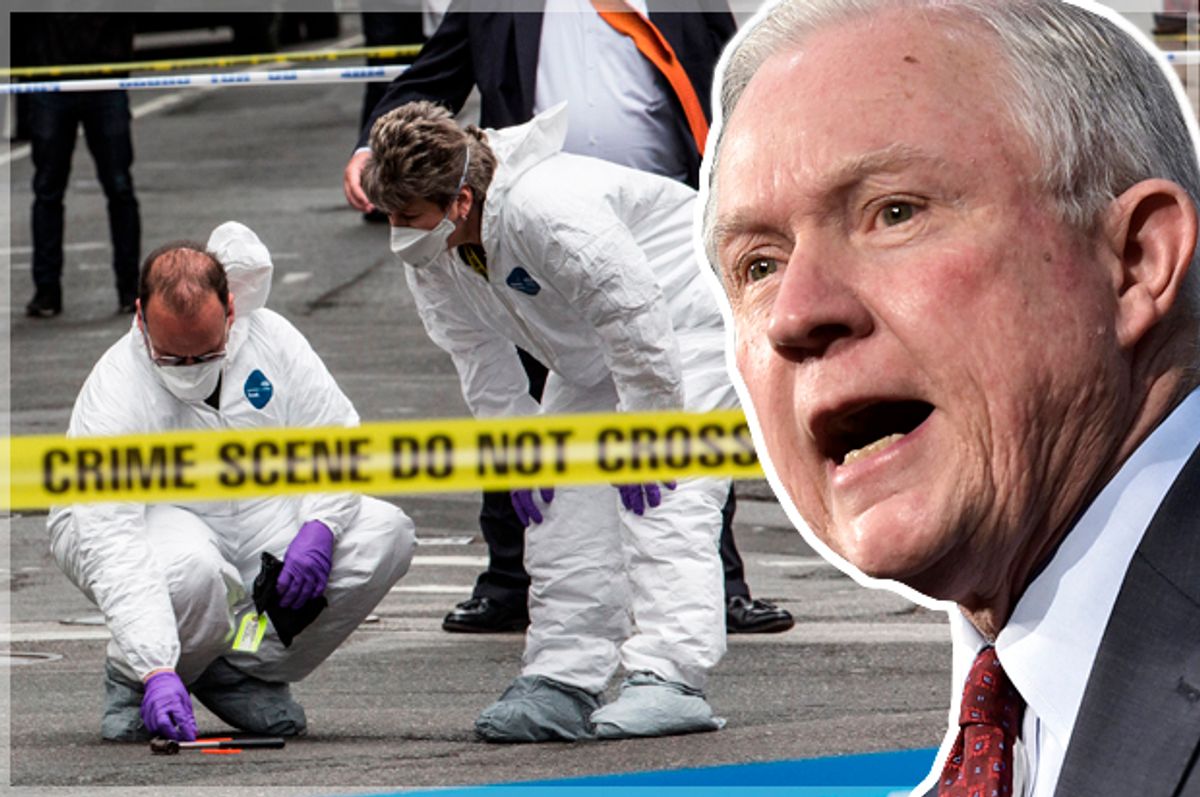 Back in the middle of the last decade we began to hear a lot about something called the "CSI Effect," which held that jurors were watching procedural crime shows on television that gave them the wrong impression of what a prosecutor should be able to show as proof of guilt and what forensic science was capable of showing. It was a big deal for a while with lots of commentary and academic studies attempting to prove that these TV shows were altering the justice system and making it more difficult to convict suspects at trial.

As it happens, conviction rates have gone down but there is intense disagreement about the cause. As one might expect, defense attorneys tend to think that a loss of faith in the justice system because of false convictions is probably the cause. Among prosecutors it is pretty much an article of faith that jurors are being trained by popular culture to believe that the science exists to prove beyond any doubt that a person is guilty and short of that they will acquit. But studies have not shown a correlation between what people watch on TV and their willingness to convict, although there is an alternate theory that even people who don't watch CSI have a greater faith in technology than is warranted. One study found that the more sophisticated electronic devices a prospective juror had, the more likely she was to expect technologically derived evidence.

How this plays out is in the courtroom is that circumstantial evidence is often less compelling and eyewitness testimony is seen as less reliable. (As it happens, eyewitness testimony can be very unreliable so in that case jurors are right to maintain skepticism.) And because the belief in the effect is so widespread it's caused some states to change the rules and allow jurors to be struck purely on the basis of their viewing habits and judges are issuing instructions to juries to avoid watching the shows during trial.

NPR, PBS, Frontline and ProPublica joined together for a big investigation back in 2011 in which they attempted to sort out the myth from the reality. They interviewed judges, attorneys, scientists and even TV writers and concluded that there's no consensus but one legitimate CSI Effect is that it's made it much harder for forensic experts to testify in court about real science. John Grossman, the undersecretary of forensic science and technology for Massachusetts, told the producers,"juries now expect high-level science to be done on lots of cases where again we don't have the resources to do them."

And that gets to the real problem. Federal, state and local governments are cutting back on funding for forensic labs all over the country. The National Academy of Sciences looked at what it would cost to bring the American justice system up to modern standards and they determined it would cost "about $2.25 to $2.50 a person in your community per year." In this political environment, they might as well be asking for everyone's first born children.

The lack of money and oversight has led to a number of high profile scandals at forensic labs across the country which led the Obama Justice Department to require that federal prosecutors only use accredited labs.

In December of 2015, Frontline reported:

Accreditation is voluntary for crime labs in most states, which means many lack any outside oversight. In the Bureau of Justice Statistics’ 2009 census of publicly-funded crime labs, 17 percent were unaccredited. Rates at private labs are believed to be far lower. For example, the American Society of Crime Lab Directors — Laboratory Accreditation Board, a primary forensics accreditor in America, for example, reports it has accredited 356 publicly-funded labs, but just 26 of the country’s hundreds of private labs.

The National Commission on Forensic Sciences was created in 2013 for the purpose of offering the DOJ professional guidance on how to improve the nation's forensic sciences. This is more important than ever considering how many people have been exonerated in recent years with the advent of DNA testing. And at the same time there has been a rush to use certain junk science techniques like bite mark analysis to convict innocent people. This was their first recommendation and was considered to be a small but vital step in creating more oversight and raising the standards.

Unfortunately, Attorney General Jeff Sessions has abruptly decided to disband the commission, citing the fact that most prosecutions take place in state and local jurisdictions. Sessions is a "states' rights" guy from way back, at least when it suits him but he was also a hard core law and order prosecutor who believed that even marijuana offenses merited the death penalty. (He claims to have changed his mind on that.)  His decision to disband the forensic commission is particularly concerning since he has a long history of looking the other way at prosecutorial misconduct, including defending convictions in capital cases where the forensic evidence was tainted or hidden and ended up resulting in exonerating a man on death row.

Sessions is probably among the large majority of prosecutors who believes that the CSI Effect is making jurors fail to convict. But he also doesn't seem to care if people are wrongfully convicted. Perhaps like his boss the president, who refused to admit that DNA exonerated the Central Park Five case and implied that they probably deserved the death penalty anyway because some cops told him they were no angels, our new Attorney General figures that anyone who finds himself in custody must be guilty of something. It's hard to think of any other rational reason for this decision.