What could go wrong? Alabama Senate votes to give local church its own armed police force 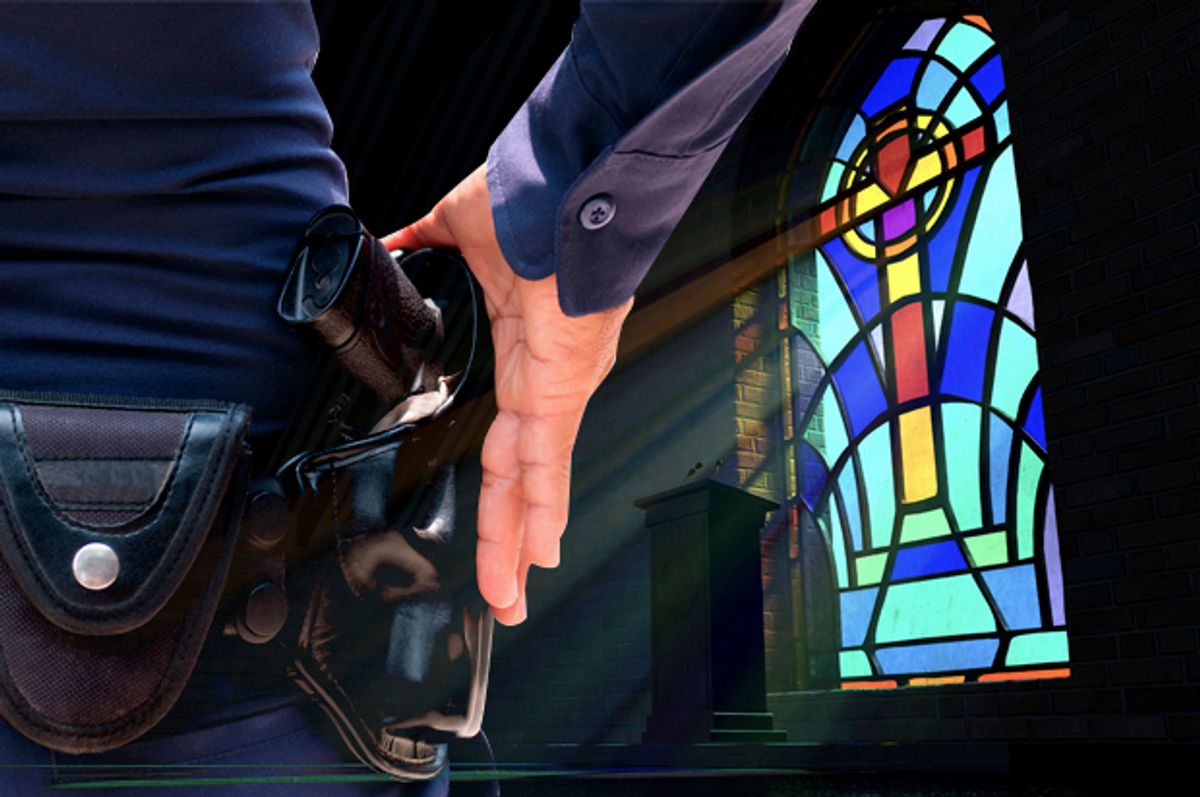 A church in Alabama is well on its way to having its own police force. On Tuesday, Alabama state senators voted overwhelmingly in favor of a bill that would allow Briarwood Presbyterian in suburban Birmingham to have its own cops. Now the proposed legislation heads to the desk of Governor Kay Ivey, who was sworn in days ago after Robert Brentley resigned in disgrace over a sex scandal.

Alabama SB 193 is sponsored by Republican Majority Leader J.T. "Jabo" Waggoner, who has represented the district for nearly 30 years, making him one of the longest-serving and most powerful senators in the state legislature. The bill would endow the church with the power to “appoint and employ one or more persons to act as police officers,” and would give members of the church police department “all of the powers of law enforcement officers in this state.”

Spokesperson Matt Moore said in a recent statement that Briarwood Presbyterian needs its own armed police force to protect its 4,100 parishioners, as well as its on-site K-12 school and seminary.

"After the shooting at Sandy Hook and in the wake of similar assaults at churches and schools, Briarwood recognized the need to provide qualified first responders to coordinate with local law enforcement," Moore stated in the message. "The sole purpose of this proposed legislation is to provide a safe environment for the church, its members, students and guests."

"We've got over 30,000 events a year that take place at Briarwood, going on all day, all night, at the school, at the church, at the seminary," Briarwood attorney Eric Johnston, who wrote much of the language in the bill, told AL.com. "We have to hire policemen all the time. It would be so much easier to have someone on staff."

The myriad glaring problems with Briarwood having its own private police department was not lost on all members of Alabama’s state Congress. A previous version of the bill made it through the Senate last year, but was never signed by the governor. At the time, Senate Democrat Hank Sanders, who represents Selma, said the legislation would likely “start an avalanche of private police forces with public authority."

Police corruption, which has long been an issue in law enforcement departments around the country, should be an even greater concern for Briarwood’s private force. Opponents of the bill have questioned whether church law enforcement would properly handle illegal activity, such as a drug investigation that took place at its K-12 school in 2015. Rodger Smitherman, a Senate Democrat from Birmingham, told NBC News he doesn’t think that will pose a real problem because the church promised it wouldn’t.

"I voted to get it out of committee after getting assurances that they would act like a real police force and they would not be an agency that covers things up," Smitherman said. The lawmaker went on to acknowledge that there are “valid constitutional concerns.”

Randall Marshall, the legal director of the Alabama ACLU, was more pointed in his criticisms of the bill.

"It's our view this would plainly be unconstitutional," Marshall wrote in a letter to the legislature cited by NBC. "Vesting state police powers in a church police force violated the Establishment Clause of the First Amendment. These bills unnecessarily carve out special programs for religious organizations and inextricably intertwine state authority and power with church operations."

Meanwhile, another bill in the the Alabama House would permit “designated members” of a church “to carry firearms for the protection of the congregation.” As the Huffington Post points out, these bills are particularly troubling considering that gun control in Alabama is almost nonexistent. “The state does not require a background check prior to private gun sales, nor does it prohibit the transfer or possession of assault weapons, 50 caliber rifles, or large capacity ammunition magazines,” the outlet notes. “And firearm owners are not required to register their weapons.”

Briarwood administrators have admitted that the megachurch hasn’t been targeted by threats or violence, such as that endured by mosques around the country. Maybe Muslim houses of worship in Alabama should also consider proposing bills to have their own police departments, since legislators should logically be all for it.