The ecstasy of defeat: "Veep" is back and better than ever

Selina Meyers and crew return to save America, or at least Sunday night 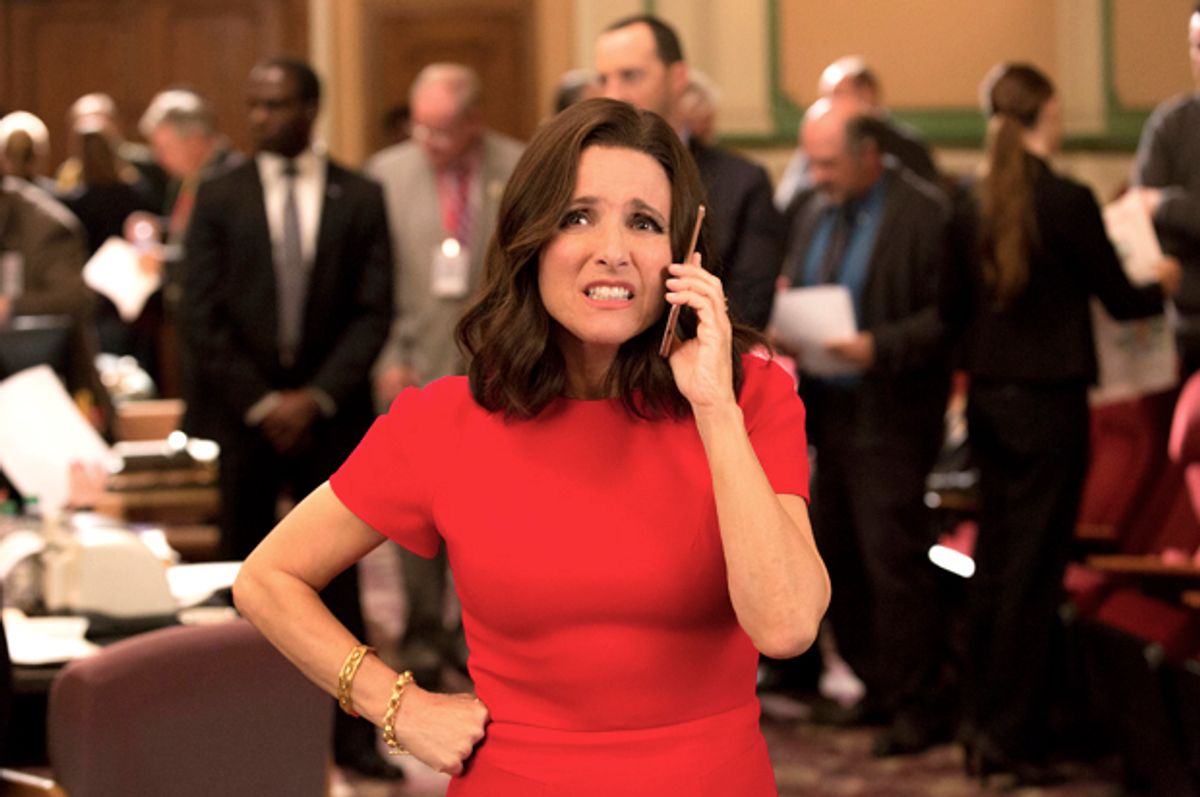 "People forget I was the first female president," an unmoored Selina Meyer (Julia Louis-Dreyfus) declares early in the new season of HBO's "Veep" in a statement that has a fresh sting in 2017. It's one year after the humiliating flameout of her brief stint as commander in chief, and while her female successor Laura Montez is charming the electorate and picking up Nobel Peace Prizes, Meyer has been reduced to grimacing gamely as she constructs her new, post-elected-office life. And what's the only thing more reckless and bungling than Selina Meyer in the halls of power? Selina Meyer outside them.

When "Veep" premiered in 2012, Barack Obama was well on his way to his second popular and largely scandal-free term. And in much the same way that "The West Wing" seemed a fittingly idealistic companion piece to the Bush years, "Veep" spent its first five seasons filling the role of the cynical, alternate reality Obama era. But now the conceit of callous incompetence masquerading as leadership just doesn't seem as funny as it once did. When the real world offers daily doses of political surrealism, ignorance and hubris, it would not have been surprising if "Veep" now suddenly seems about as funny as an Orwell or Atwood novel. Even the very name of the show has long been as outmoded as that of "New Girl." But miraculously, in its sixth season, "Veep" remains very much on its game. And if it's becoming predictable to enthuse about the sustained brilliance of Julia Louis-Dreyfus and her co-stars, who would want to be novel?

Without an entire nation to mismanage, Meyer and her inner circle have now largely been scattered to the winds. Gary (the exceptional Tony Hale) and Richard (Sam Richardson) are still close at hand, but Mike (Matt Walsh) is now an overwhelmed stay-at-home dad, Amy (Anna Chlumsky) is running her fiancé Buddy Calhoun's bid for governor of Nevada, congressman Jonah (Timothy C. Simons) is still playing the cancer card, and Dan (Reid Scott) is in morning-news show hell with a co-anchor (an acidic Margaret Colin), who makes Selina look like she deserves to be sipping out of a World's Greatest Boss mug. In other words, this seems like a perfect time to bring the gang back together.

Throughout the first three episodes made available to the press, the various characters of "Veep" keep crossing paths, giving them ample opportunity to be as competitive, petty and verbally abusive as ever, still snarling cracks about "frat house gang rape," transgender "bearded ladies" and inbreeding, but amid new power dynamics. (They also get to deliciously play off a crackerjack array of guest stars, including Amy Brenneman and Stephen Fry.) At the heart of the action, there's Selina, barely shambling through her status as the widely disliked, former short-term president. Her base of operations is now the South Bronx, for the "optics" but also the cheap real estate, in a space she declares "the worst place they've ever stuffed an ex-president, and I'm including JFK's coffin."

Twelve months into rebuilding her life after her loss, she's promising to launch some vague charitable endeavor involving adult literacy but also maybe AIDS, griping about her memoir advance and speaking engagement fees, angling for the presidential library she feels she deserves, getting left out of photo ops, and of course, soon enough, cozying up to despots. "The poisoning and the torture and the death squads aside, I think he's good people," she observes of a potential new ally, with a pragmatism that feels suddenly completely authentic for our times. As ever, everything Meyer touches rapidly escalates to a social faux pas with far-reaching ramifications, but now her actions are heightened by her newly rudderless desperation. They're also ample opportunity for Louis-Dreyfus and her cast to show off their reliable genius at physical comedy — you may come to "Veep" for the elaborately constructed, rapid-fire obscenities, but you stay for the meticulously choreographed pratfalls.

Much of this new season of "Veep" was well underway before Nov. 8. Yet the ways in which what Meyer calls the "horror show" of democracy play out in America feel almost painfully real. There's also something undeniably cathartic, this peculiar moment in America, about watching a fictional female politician stew over what "this cocksuck of a country did to me." And if in their utter humiliation, defeat and chaos, Selina and her crew are still scrapping and still finding reasons to laugh, that makes "Veep" more timely, more perfect than ever.