Is Julian Assange a misogynist, or just seething with rage against Hillary Clinton? We wonder

Assange once described Sweden as "the Saudi Arabia of feminism," and has focused his rage on one woman 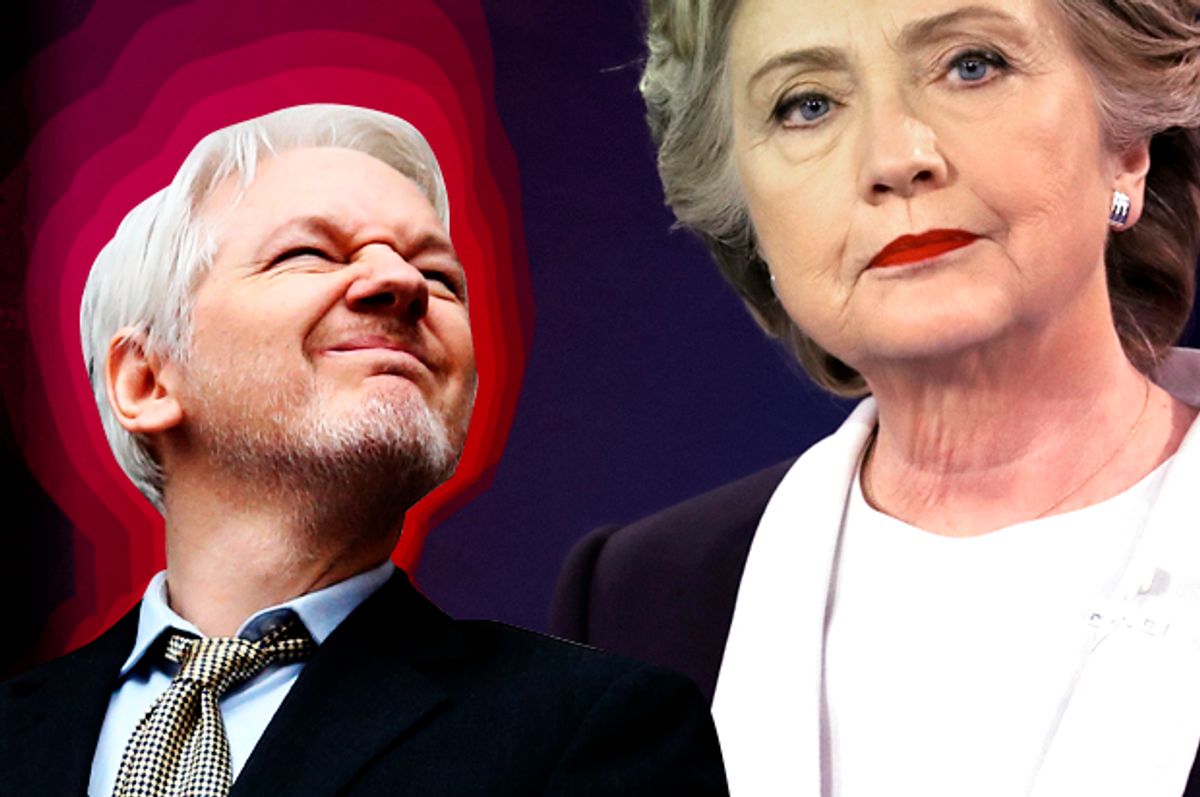 It's time to admit that there is a sexist pattern to Julian Assange's behavior. It's impossible to truly understand his motives, or his election-shaping hatred of Hillary Clinton (he was even tweeting about her this week), without first looking at his views on women.

It's not that misogyny is the only characteristic that defines Assange, or even the primary one. He is the most emblematic of the early 21st century internet radicals, a man who has literally cut himself off from the rest of the world (remember, he is at the Ecuadorian Embassy in London by choice) and constantly bombards himself with online information.

This is why — although his place in history will perhaps be most infamous for his willingness to sell out his ostensible beliefs to become a Russian propaganda arm — we shouldn't be surprised that he reflects the ideological misogyny that is so ubiquitous to the modern era's online political culture.

"He's kind of an OG of the particular perception, the show-offy, dude-ly internet," Amanda Marcotte told me recently. "They lean right, they lean left, but what they have in common is all this internet-y lingo. This attitude like they're involved in derring-do, kind of a clique-y nature, and yeah, it's very bro-y. Very contemptuous of feminism, very sexist."

Writer Sady Doyle echoed that view. "The only difference between Julian Assange and GamerGate is that Julian Assange once had credibility on 'the left.' If he still does, it's because people are refusing to see the pattern," she emailed me.

Assange's misogyny is most clearly evident in the fact that he is wanted on rape charges. It can never be stated often enough that Assange isn't in that embassy as a political refugee, but because two women have said that he sexually assaulted them. To put this in perspective, though, imagine for a moment if Assange had sought refuge because he was accused of a hate crime against two members of a racial minority group, or two members of a religious minority group. If nothing else, do you think our political culture, particularly from the left, would be nearly as quick to dismiss this as an inconsequential detail of his biography rather than one of its central features?

It becomes a whole lot easier to believe that he would refuse to respect a woman's views on sexual consent when you consider that he described Sweden as "the Saudi Arabia of feminism." Although Assange has unsurprisingly relied on the fact that many are inclined to disbelieve women who come forward with these types of accusations against powerful men — particularly because he can easily paint them as part of a government conspiracy against him (or as one of Assange's lawyers put it, a "honeytrap") — he also blamed his plight not on sinister government agents, but rather Sweden's willingness to respect women's rights. Hence his claim that "I fell into a hornets' nest of revolutionary feminism."

When discussing Assange's claim of being framed, Marcotte told me that "I think I would take that more seriously if he didn't start spewing literally every excuse that men accused of these crimes do. He and his lawyers tried to make it sound like it was the overbearing sexual assault laws in Sweden that was the problem, not his personal choices."

Nor was Assange's anti-feminism limited to that 2010 interview.

"I think his basic sense of feminism as a repressive force, which is all about limiting 'free speech' and punishing men for being manly, is something he could have lifted off any MRA blog on the internet," Doyle said. "The fact that he happens to know some lefty lingo has allowed him to cloak the basic unoriginality of these ideas — he can talk about feminism being 'reactionary,' or a 'tool of the state,' or claim feminism causes wars. That may confuse some people, who hear the jargon and not the sentiment. What he's saying is the same thing the MRAs are saying, though: feminism is mean, it's out to get him, it wants him to clean up his act, and he doesn't wanna."

Doyle added: "Julian Assange's thoughts on feminism are very boring to me. They're the same thoughts every whiny white man has. What's disturbing is that people still take him seriously."

This brings us to the fact that Assange hates — and I mean absolutely, obsessively hates — former Secretary of State Hillary Clinton, who less than six months ago was en route to becoming the first female president of the United States. While much of this can be explained by Clinton's role in targeting him while she was in power, Assange hasn't directed anywhere near that much animosity toward other American politicians who have been as hostile toward him or more so. Similarly, he never undertook the efforts to undermine the male presidential candidate who oversaw his so-called persecution (Barack Obama) like he did that of his female counterpart (Hillary Clinton). Finally, there is a sheer venom in how Assange refers to Clinton that cannot be explained solely by their personal history together.

"The fact that all three of these men were obsessed with Hillary Clinton, and taking down Hillary Clinton, is really significant," Doyle pointed out. "Two of them, [President Donald] Trump and [Russian President Vladimir] Putin, explicitly said that Hillary Clinton did not behave correctly for a woman, that she did not know her place. That was hugely important to them, in terms of why she had to be taken down. Assange didn't say it, but we know how he feels about feminists, and we know how intensely he devoted himself to taking down Clinton during the election."

As Marcotte observed, part of this is because Assange's misogyny isn't just a personality flaw, but an ingrained ideological paradigm. "I hope that one of the most important takeaways from this election is that sexism is in fact a powerful and rigid political ideology," Marcotte said. "It moves votes, it creates movements and weird political alliances. There is a tendency to treat sexism as if it's this minor irritation when in fact it's this driving force throughout history, and I suppose it shouldn't surprise that it reared its head so boldly when a woman was running to occupy the most powerful office in the world. That was a deeply symbolic threat to male dominance that I think this election showed that a lot of men thought had to be answered."

"Understanding sexism as a self-sufficient, self-organizing ideology is essential to understanding how Trump,  Assange and Putin came to be linked," Doyle said. "We still dismiss sexism as something 'personal,' a problem that stems from men being mean or maladjusted, rather than treating it as a political philosophy devoted to uplifting men at women's expense. It is true that there are both conservative sexisms and leftist sexisms, but that's because both conservatism and leftism were initially built to serve men — every tradition we have is sexist, basically, because until very recently every mode of public engagement or authority was constructed by and for the patriarchy."

Doyle added: "But even though Assange's sexism might look very different than Putin's, or even though state control of women's bodies might look different in the old USSR and the current United States, the basic emphasis on maintaining male power at the expense of women is there." (For more on Doyle's exploration of the misogyny that links Trump, Putin and Assange, I highly recommend her January article on the subject for Elle.)

The bottom line about Assange, unfortunately, is that you can't decouple the man's hostility toward women from his overall agenda and legacy. This is a man in self-imposed exile because of rape allegations, who goes on anti-feminist diatribes and conspired with two sexist foreign leaders (here is a good piece on Putin's sexism), and whose chief mark on the world so far has been making sure that a woman did not become president of the United States.

It is entirely possible to share Assange's views on imperialism, overly powerful governments, and other major social justice and geopolitical issues without being a sexist. That said, it is not possible to defend Assange the man without being a misogynist or, at best, complicit in misogyny (a distinction that doesn't really mean very much).

WikiLeaks did not respond when I reached out to them for comment on this article.