Ted Nugent has threatened both Hillary Clinton and Barack Obama — but gets an Oval Office visit! 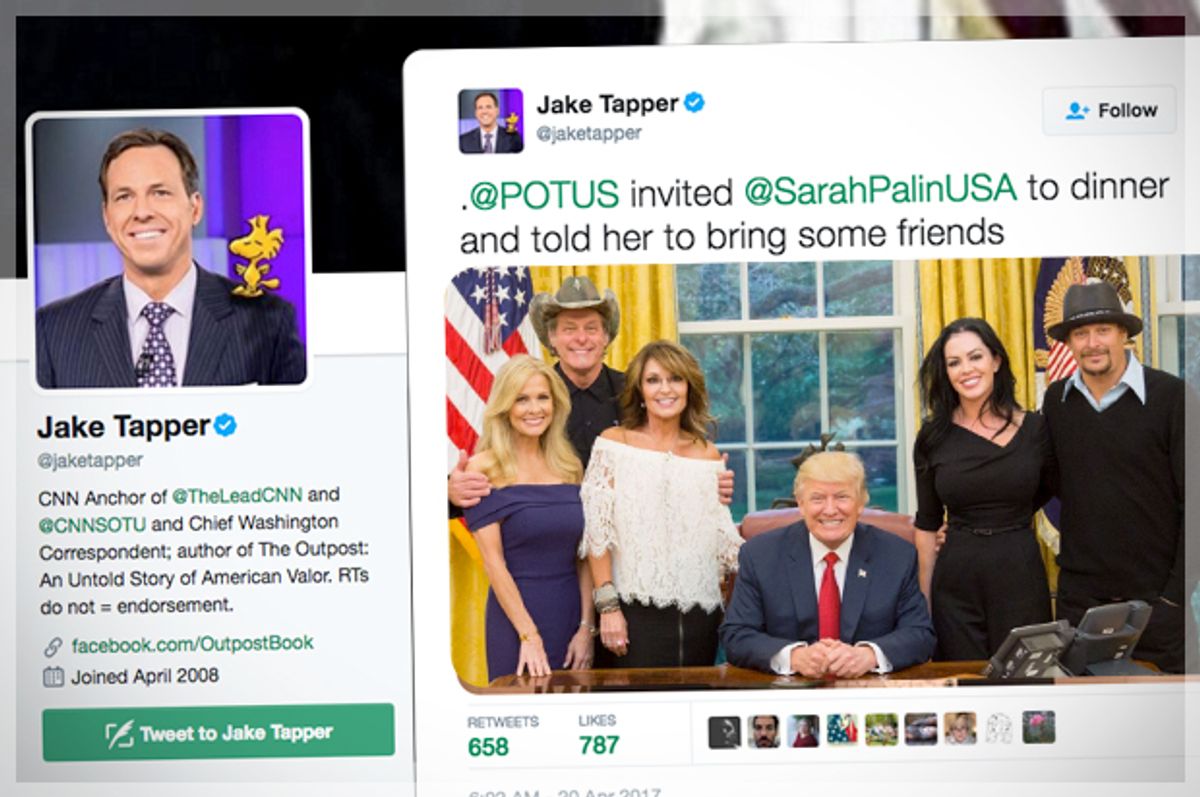 "So today is the 242nd anniversary of The Shot Heard Round The World is it!," Nugent posted on Facebook, alongside a picture of him grinning and shaking Trump's hand. "Well well well looky looky here boogie chillin', I got your Shot Heard Round The World right here in big ol greazyass Washington DC where your 1 & only MotorCity Madman WhackMaster StrapAssasin1 dined with President Donald J Trump at the WhiteHouse to Make America Great Again! Got that? Glowing all American over the top WE THE PEOPLE gory details coming ASAP!! BRACE!"

"A great night at the White House. Thank you to President Trump for the invite!" Palin proclaimed through her Facebook account on Thursday morning. Her post showed three pictures of Palin in the Oval Office, including one of her talking with Trump's son-in-law and adviser Jared Kushner, one of her talking with Trump on her own, and one in which she and Trump are joined by Nugent himself.

.@POTUS invited @SarahPalinUSA to dinner and told her to bring some friends pic.twitter.com/Okk6wVWpha

.@POTUS invited @SarahPalinUSA to dinner and told her to bring some friends pic.twitter.com/Okk6wVWpha

In another picture retweeted by CNN's Jake Tapper, Palin and Nugent can be seen ridiculing a portrait of Hillary Clinton from when she served as First Lady. This has ominous undertones, given that Nugent once wrote about Clinton during the 2016 presidential election that "the devilbitch hates everything good about America! VOTE TRUMP!" During a concert in August, Nugent told his audience that Clinton was "one toxic bitch. Now why isn’t that bitch in jail?"

Most ominously, Nugent in January argued that both Clinton and President Barack Obama should "be tried for treason & hung."

It can't be argued that Trump isn't aware of Nugent's violent commentary. When Nugent aroused controversy in 2012 for proclaiming that "if Barack Obama becomes the president in November, again, I will be either be dead or in jail by this time next year," Trump defended him on Twitter by claiming that Nugent was only using a "figure of speech."

Of course, Trump wasn't nearly as amused last month when Snoop Dogg released a music video in which a Trump clown is pranked into believing that he will be shot in the head.