After they held Michael Marshall down on his stomach, he choked on his vomit, entered into coma and later died 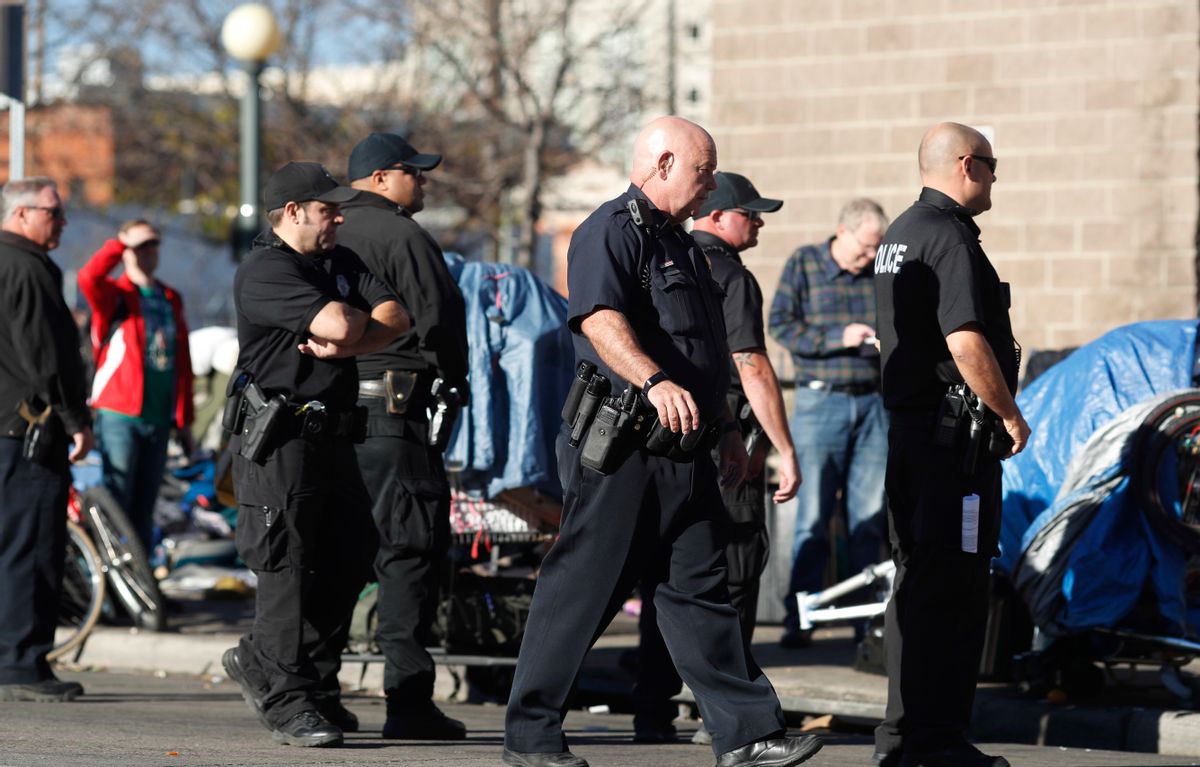 Denver Police Department officers keep watch during a sweep of homeless people who were living on the walks surrounding a shelter near the baseball stadium Tuesday, Nov. 15, 2016, in downtown Denver. A new report from The National Law Center on Homelessness and Poverty said Tuesday, Nov. 15, 2016, that cities nationwide such as Denver are enacting more policies that criminalize homelessness. (AP Photo/David Zalubowski) (AP)
--

Three law enforcement officials who were held responsible for the death of a Michael Marshall, a mentally ill homeless prisoner, are facing consequences — albeit consequences that some feel are too light.

Captain James Johnson, Deputy Carlos Hernandez and Deputy Bret Garegnani were found to have violated department policies and procedures in the circumstances leading up to Marshall's death, according to a report by Reuters. As a result, Johnson and Hernandez will both be suspended for 10 days, while Garegnani will be suspended for 16 days, all without pay. In addition, they will be required to receive training on approaching mentally ill prisoners in the future.

"The tragic death of Mr. Marshall and the time it has taken to complete a thorough review of the incident has been difficult for his loved ones and for everyone involved. Discipline is appropriate and has been imposed."

Marshall's family issued a public statement through their lawyer denouncing the decision. "Mere suspensions of short duration, and imposed on only a few of the many individuals involved, is a shockingly light response," the family wrote.

Marshall, who was 50 when he died, was arrested in November 2015 for trespassing. He refused to take his schizophrenia medication for two days, and public safety officials claimed he became manic and erratic in his behavior as a result.

Officers maintain that Marshall's behavior was what prompted them to restrain him, claiming that he resisted despite being shackled. Marshall was then held against the floor before choking on his vomit. He fell into a coma and passed away nine days later.