“Drew! Barry! More Power!”: The 10 best penguin movies ever made

World Penguin Day is April 25, and there are plenty of films to help you celebrate your passion for penguins 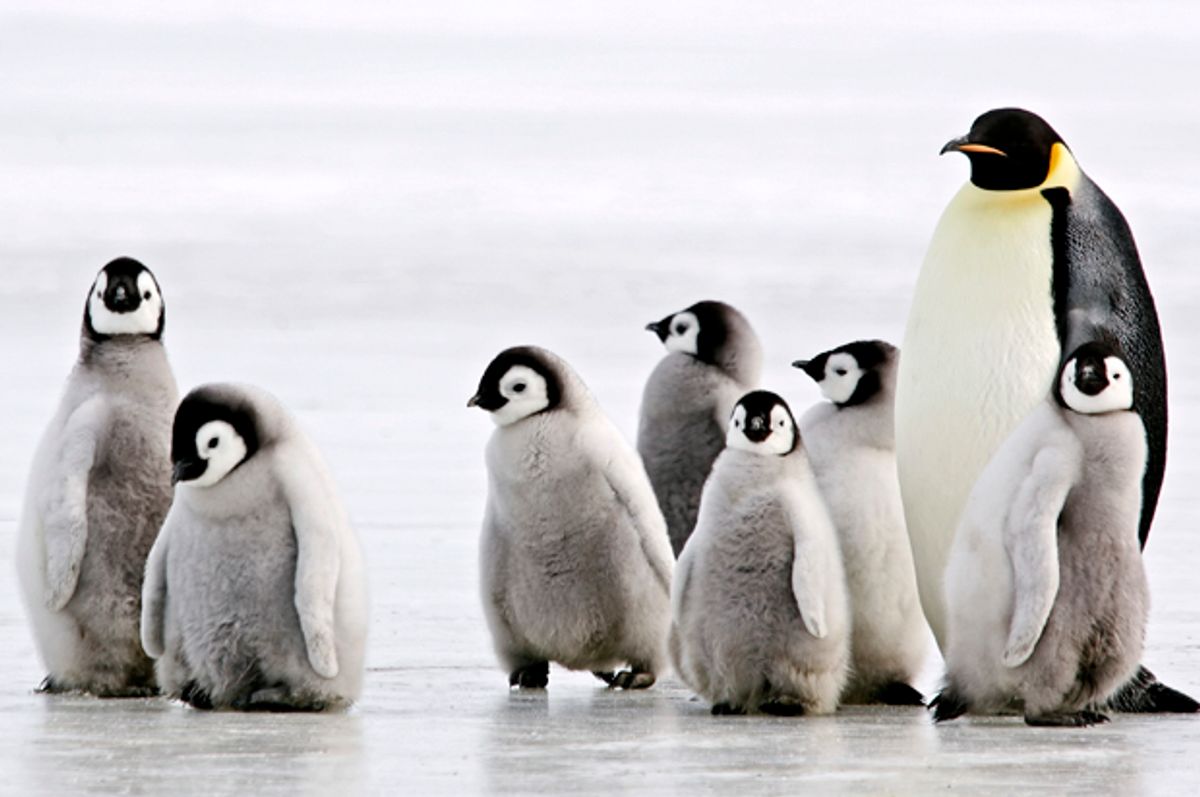 Penguins have been featured in everything from the indie drama “Five Corners,” where Heinz (John Turturro) gifts Linda (Jodie Foster) two penguins he stole from the Bronx zoo, to the documentary “Encounters at the End of the World,” where Werner Herzog asks marine ecologist Dr. David Ainley about insanity among penguins, before following a “deranged” penguin to his certain death. And of course, “The Penguin” was a villain in the “Batman” series.

But most of the 17 species of penguins became hugely popular in documentaries and animated films. Penguins are often depicted as comic because of the way they waddle. But they are cool and cute — check out the punk crests seen on the rockhopper penguins, or the black lines on the chinstrap species. As professional penguin counter Ron Naveen says, “We’d all have sadder lives if we didn’t have penguins to cheer us up!”

Here are 10 films ranging from narrative features and documentaries to animated films and even some shorts, that feature the adorable flightless waterfowl.

1. “The Penguin Counters” is the latest documentary in the rookery of “penguin porn.” Inspired by Sir Ernest Shackleton, Ron Naveen quit his job as a lawyer to become a penguin counter. He has spent 28 seasons in Antarctica counting penguins to make determinations about ocean health, climate change impact and other related factors, such as penguin populations, diet and more. This engaging nature documentary shows the arduous process of Naveen and his crew traveling to Deception Island (part of an active volcano) to count 60,000 chinstrap penguins. Along the way, they take time out to pay respects to Shackleton’s right-hand man Frank Wild, and visit the Falkland Islands, which respectively provide interesting historical footnotes as well as scenes of the Magellanic penguins in their natural habitat. But it is the scenes of the penguin colonies in Antarctica that will have animal lovers oohing and aahing. Just as Naveen and his crew wait to count penguins, so, too, do viewers. But the payoff of seeing the penguins is worth it.

2. “March of the Penguins” The Oscar-winning documentary, narrated by Morgan Freeman, traces the annual mating habits (and circle of life) of the majestic emperor penguins in the South Pole. Filmmaker Luc Jacquet captures the harsh conditions and spectacular beauty that surround the penguins as they trek 70 miles to a secure ice floe. Moreover, while the film shows them marching in a single file, and sliding on their bellies, they are also seen comically slipping and also zipping through water and “flying” back up on to the ice. It’s mesmerizing. The film also chronicles the process of keeping the penguin chick egg safe and warm as expectant parents pass it back and forth. The film, a huge international hit, spawned the penguin craze that continues today.

3. “Penguins of Madagascar” The zany quartet of Skipper, Kowalski, Rico and Private were the breakout stars of the 2005 hit animated film “Madagascar.” While these denizens of the Central Park Zoo literally flew in the 2008 sequel, “Madagascar 2” (well, until Penguin Air crash-landed in Africa and the plot kicked in), they also had their own TV series (2008-12), and, eventually, their own (unrelated) feature film in 2014. In the film, the amusing antics feature Skipper trying to control the other penguins as they embark on various capers. The penguins’ interest in “Cheezy Dibbles,” leads to a globe-hopping adventure to stop Dave, a jealous octopus who wants revenge on the cute penguins. It’s a silly film with some fun slapstick and corny wordplay, such as “You just mermaid my day!” and “Drew! Barry! More Power!”

4. “Happy Feet” Adorable, animated, anthropomorphic penguins sing and dance in this 2006 Oscar-winning film. Mumbles (Elijah Wood) is unable to sing because of a prenatal accident, but boy, can he tap-dance (like Savion Glover, filmed in motion capture). The film, which teaches lessons of difference and diversity (in a colony where penguins look pretty much the same), features many pop songs and poignant moments as Mumbles tries to woo Gloria (Brittany Murphy). And the film, directed by Aussie George Miller, gives Nicole Kidman a chance to act like Marilyn Monroe and Hugh Jackman a shot at impersonating Elvis. The film also raises environmental concerns from overfishing to pollution (as evidenced by plastic rings that choke the penguins). “Happy Feet” was a success at the box office, which of course prompted a sequel, the unspectacular 2011 feature "Happy Feet, Two."

5. “Surf's Up”  Yet another animated penguin film, this comedy, made in 2007, was a surfing mocumentary. The sight gags range from penguin surfer hieroglyphics to footage from SPEN (Sport Penguin Entertainment Network). The plot has macaroni penguin Cody Maverick (Shia LaBeouf) following his dream to win a World Surfing Contest, like his hero, Big Z (Jeff Bridges). He finds a love interest in Lani, a gentoo lifeguard (Zooey Deschanel). The penguins are hilarious in “Surf’s Up,” in the jungle or getting all bug-eyed reacting to wipeouts. A sequel,  “Surf’s Up 2: WaveMania” was released earlier this year.

6. “Farce of the Penguins” Easily the worst penguin film ever, this 2006 mockumentary, written and directed by Bob Saget, is a painfully dull and rude spoof of “March of the Penguins.” The film features footage of penguins in the Antarctic while comedians voice penguin crude humor. As one uncomfortable penguin (Gilbert Gottfried) screams about “freezing his nuts off,” he also gets into a fight with narrator Samuel L. Jackson over whether penguins have nuts. As Carl (Saget) and Jimmy (Lewis Black) march off to their mates, they participate in an Army-style call and response where they debate if penguin pussy is hot or cold. Despite the tuxes, however, it’s all very lowbrow, and best viewed with the sound off.

7. “Mr. Popper’s Penguins” The classic 1938 children’s book by Richard and Florence Atwater became a Jim Carrey vehicle in 2011. The silly film has an uptight businessman who inherits six penguins (a mix of live and CGI birds) from his late adventurer father. He keeps them in his fancy New York apartment, where they run amok (one even gets caught in the toilet) and like to be kept very, very cold. Popper tries to keep the one named “Stinky” housebroken, but he has trouble grappling with the penguins’ noise and smell. Among the comic highlights is a set piece involving the penguins surfing down the ramp of the Guggenheim, and flying through the air. The film is mostly satisfying for its target audience: children and penguin lovers.

8. “Mondo Penguin” This humorous 2009 short claims that for the past 50 years, “Penguins have been making experimental and avant-garde films,” such as “Stop! It’s Frozen,” “The Fish, the Walrus, and My Insecurities” and “The Thought of Flight.” And Dr. Charles Heathrow (Andy Maguire), historian, writer and founder of Mondo Penguin, a nonprofit distribution operation for films “made by penguins and for penguins,” can’t think of a more beautiful film than “Tuxedo Drifter,” by Flippy. Thanks to “Mondo Penguin,” audiences can see glimpses of its genius.

9. “The Wrong Trousers” Penguins are not always good or cute as evidenced in this Oscar-winning 1993 “Wallace and Gromit” short, featuring a mischievous penguin. When the crafty villain moves in with Wallace and Gromit, he disrupts the household dynamic, forcing the loyal silent dog to right the wrongs. Gromit observes the bird’s criminal scheme, which involves using a pair of “techno-trousers” that Wallace has invented to commit a diamond heist. While the penguin is cunning, he is no match for a dog who loves his owner. “The Wrong Trousers” features comic high jinks not only in the clever scenes of the penguin casing the joint — using a tape measure to maneuver up the side of the building — but also in the robbery itself (which causes the cool bird to sweat over a few developments) as well as during the madcap finale that plays out on a train track.

10. “City Slickers” This charming documentary traces the African urban penguin Henry making his home in Boulders, a beachside town in South Africa. The film uses a penguin-cam to give the bird’s-eye view of life, and shows the penguins climbing, jumping and dodging traffic as they live side by side with townsfolk. A group of penguins invade local homes, pools and even a golf course! The penguins do have their own private beach where they burrow and fight as they molt, mate and feed and shelter their young chicks who are susceptible to predators and early death. Trevor de Kock’s film also chronicles the local rescue efforts when an oil spill threatened the penguins’ health and safety. While “City Slickers” is not an easy film to find, it is one of the most charming penguin documentaries.