An apolitical profession wakes up: Trauma surgeons speak out about gun violence

Trauma surgeons push for more research into the causes of gun violence, 20 years after such efforts were silenced 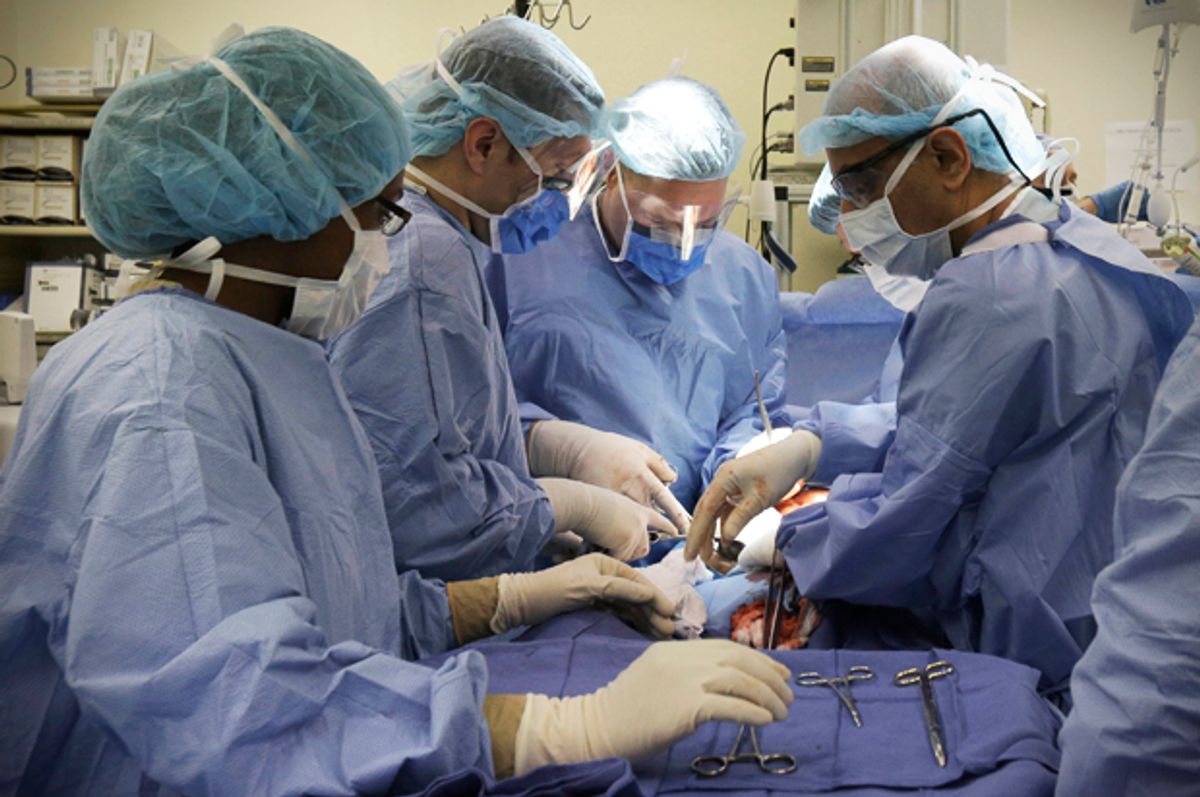 There are a lot of voices in the national discourse about gun violence — victims, politicians, activists, lobbyists, gun owners, pundits, law enforcement — but rarely does the public hear from the very people who deal directly with the fallout from gun violence on a daily basis: trauma surgeons. These are the professionals who see the reality behind the cold statistics of injuries and death from firearms. For various reasons, their views and experiences are rarely heard.

A small but growing movement in the world of trauma surgery is trying to change that. The increased attention to the topic of gun control in the aftermath of the Sandy Hook school shooting, and the way the Black Lives Matter movement has drawn attention to the intersection of race and violence, have contributed to an atmosphere where trauma surgeons, some of whom see gunshot victims on a daily basis, feel compelled to speak up.

Last week the American Surgical Association held its annual meeting in Philadelphia, and Dr. Shelby Resnick, a trauma surgeon in that city, presented a paper she co-wrote with a group of other Pennsylvania trauma surgeons and researchers about the correlations between firearm injury and laws restricting access to guns.

Recently there has been a definite uptick of interest, observers and insiders say, reflected in the number of doctors and surgeons willing to become involved in the larger political discourse about firearm violence, both in terms of gun policy and the social dynamics that lead to gun violence.

Dr. Jessica Beard, one of the co-authors of the paper, explained on the phone that surgery is "a historically conservative profession." She added, "Our mainstream surgical bodies are interested in firearm violence but not necessarily ready or even aware of the need to frame it this way."

Beard shared a short paper she published in March for the Journal of the American Medical Association Surgery titled "Structural Causes of Urban Firearm Violence: A Trauma Surgeon’s View From Philadelphia," in which she and Dr. Carrie Sims argued that more attention needs to be paid to "the incredible racial/ethnic disparity that exists in the incidence of firearm assaults," and called for more research about the role that racism and other social pressures play in the high rates of firearm violence.

Beard sent me other examples of articles in the Journal of Trauma and Acute Care Surgery and the Lancet demonstrating this surge of interest by members of the surgical community. “We’re trauma surgeons in West Philadelphia, so we see patients with firearm injuries literally every single day," Resnick said, explaining why she felt it's important for trauma surgeons to become involved in this discussion. “We deal with the patients. We’re sort of the front line of this. We don’t have to talk numbers. We can talk actual patients. I think that brings a lot of gravitas to it.”

Beard echoed this: "We, as trauma surgeons, know these are who these patients are. We know they do not fit into the stereotype of what the public thinks in general about who’s injured in an urban center like Philadelphia by a firearm," she said. “If we don’t speak about it, our silence is complicit with those stereotypes.”

Both doctors made sure to note that, in the 1990s, there was a similar interest within the surgical world in talking about the root causes and political implications of gun violence. In 1993, Dr. William Schwab, one of the co-authors of last week's gun control presentation at the American Surgical Association meeting, gave a speech to the Sixth Scientific Assembly of the Eastern Association for the Surgery of Trauma, titled "Violence: America's Uncivil War," arguing that violence was at "epidemic proportions" and calling for harsher restrictions on gun sales to stem the tide.

In 1996, however, congressional Republicans threatened to strip the Centers for Disease Control of funding if the agency dared fund research into gun violence. The threat had a chilling affect across academia, shutting down research efforts at the University of Pennsylvania, among other institutions. In 2013 after the Sandy Hook shooting, President Barack Obama issued an executive order calling on the CDC to restart efforts to research the causes of gun violence. But the efforts have been slow-moving, as most medical researchers still fear blowback from pro-gun politicians.

“I dislike that it becomes such a hot political issue," said Resnick, noting that she would prefer to look at it as "a public health issue, just like motor vehicle accidents were in the '60s and '70s.

"I’m not someone who says take all the guns and throw them in the Pacific Ocean," she added. "We are a society that wants to live with guns, but let’s figure out how to do this safely.”

“Physicians are required to be advocates for patients," Beard said. To do that most effectively, she argued, it's not enough to patch up people after they've been shot. Doctors need to get involved in advocating for research and public debate to prevent these injuries.

“We’re still in the advocacy and education phase," Dr. Beard said, adding that while many surgeons are eager to talk about gun violence as a public health issue, they often are not not familiar with sociological or political terms like "structural racism."

Beard said she believes there's an eagerness to learn and to push for more research that "could help us to get to the root causes of urban violence and stop blaming the victims of violence" in favor of advocating for policy changes that have been demonstrated to reduce firearm injuries and death.

"This is something I do as a physician," Resnick said. "I try to keep people from dying, and people are dying because of firearm injuries.”