The O’Reilly within: What I know about men and why sexual harassment persists

Even in the most progressive environments, men will treat women like dirt. It's shameful, and it's true 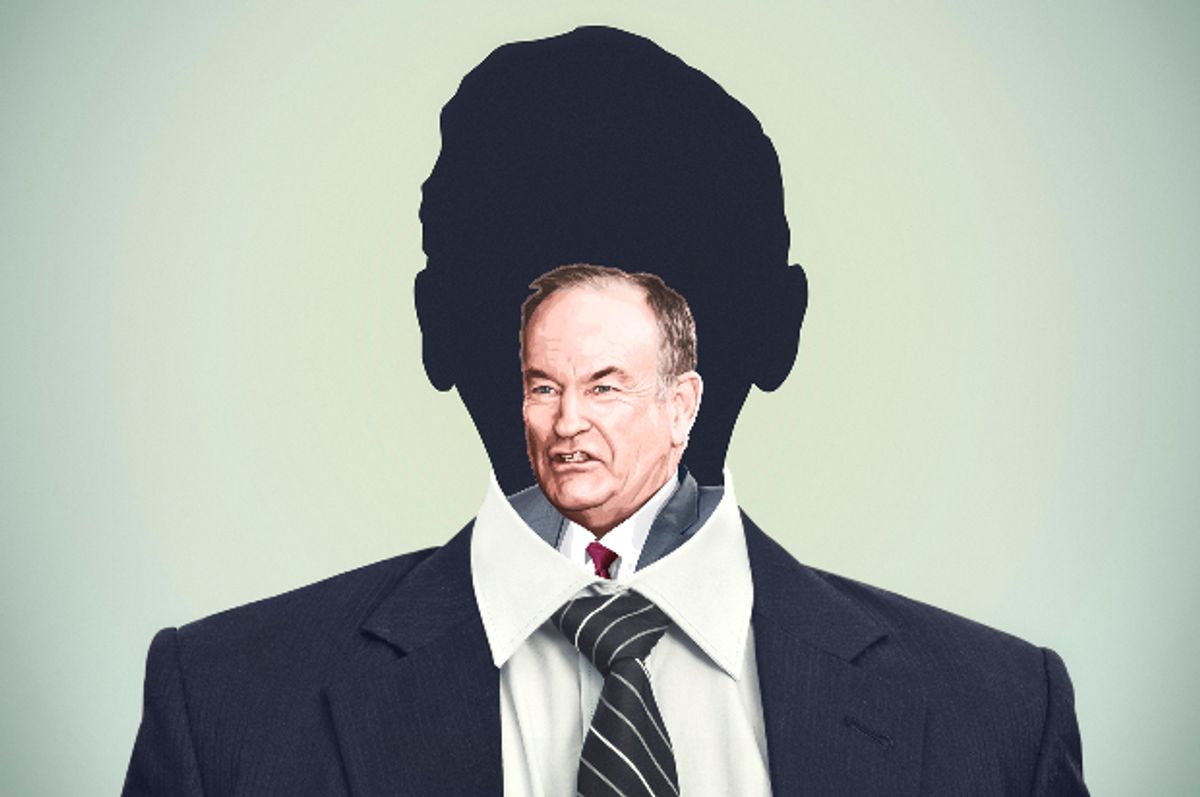 I got my start in this business almost 50 years ago at The Village Voice in New York City. Those were the halcyon days of the New Left, the counterculture, the anti-Vietnam War movement, and the Voice was the first “alternative” newspaper on the scene. It wasn’t a radical newspaper, but it published radicals. It wasn’t a feminist newspaper, but it published feminists. The Voice was the place you turned to get the other side: to learn about the strange, far-fetched movement to legalize marijuana led by guys like David Peel, to read coverage of stuff like the Central Park Be-In, to read about hippie utopian soup kitchens and crash pads on the Lower East Side run by a guy who called himself Galahad.

Uptown on Madison Avenue, guys were walking around in rep ties and slapping back three martini lunches and selling toothpaste to housewives out in Omaha. But downtown at the Voice, guys wore fringed rough-out leather jackets and Frye boots and peacoats, and women wore black tights and miniskirts and turtlenecks and let their hair grow long and straight down their backs, and everybody hung out in bars like the Lions Head and the Cedar Tavern and the San Remo and talked all night about Heavy Stuff and then went home with one another and practiced Free Love. Something like that was supposed to be happening, or we thought it was anyway. It was enough of a Thing that Time and Newsweek and Life magazines regularly put people like us on the cover. Fashion magazines ran photo spreads of models awash in feathers and fringes and Indian baubles straight off a blanket in Santa Fe. Something was definitely In The Air, and we all knew it. The thing was, we didn’t know what the hell to do about it, especially the guys.

The Voice was as enlightened a place as you could find anywhere, publishing some of the earliest feminist writing by women like Ellen Willis, who was a founder of the early feminist group Redstockings; Susan Brownmiller, who wrote the groundbreaking book on rape “Against Our Will”; Vivian Gornick, who wrote “Essays in Feminism”; Lucy Komisar, who wrote “The New Feminism”; and Jill Johnston, the dance critic who celebrated her life in the pages of the Voice and wrote “Lesbian Nation.” Some of the earliest writing on gay rights by Arthur Bell and Richard Goldstein was in the Voice. Two of the Voice’s top editors were women — city editor Mary Nichols and culture editor Diane Fisher — and the Voice published literally hundreds of groundbreaking articles by women like Robin Reisig, Mary Breasted, Karen Durbin, Maureen Orth, Judith Coburn and many others.

But the Voice was basically a boy’s club. Out of six staff writers there was only one woman, Mary Breasted. Read the front page of the Voice back then, and you probably see stories by Paul Cowan or Jack Newfield or James Ridgeway or Alexander Coburn or Howard Blum or Ron Rosenbaum or Robert Christgau or Phil Tracy or me. We ruled the roost up on the fourth floor, the writers’ floor. And you want to know what? Even there in the rarified enlightened air of the Village Voice, we harassed the women, or at least I did anyway. There wasn’t any Bill O’Reilly stuff going on, but I teased women at the Voice with little jibes and suggestive remarks that I thought were playful and weren’t meant to be hurtful or insulting, but nevertheless the remarks themselves and the fact that I could get away with them came from a place of power and privilege I enjoyed simply because I was a man. I regret the way I behaved back then and I’m ashamed I acted like that. Harassment is harassment, and when it comes from men and it's directed at women, it's sexual harassment. It’s the O’Reilly within, and I’m damned if I can figure out where it came from, or why it persists so strongly.

You know what image comes to mind when I think about this stuff? A couple of square feet of floor right next to my bed. What the hell happens when anyone gets up in the morning? I mean, one minute you're sleeping the sleep of a baby, and the next minute your feet hit that little square of floor and everything changes. One day back then I got up and walked through Washington Square Park and up University Place and got on the elevator and went up to the fourth floor and spied one of the women at the Voice and said something snide about her having her period. One morning I woke up at West Point and swung my feet over the edge of the bed in the barracks and went out on a date with my girlfriend and called her EB, for “Extraneous Barbara.” It was nominally a nickname; I meant it affectionately, but it wasn’t even a marginally subtle reminder that as a woman, especially as a girlfriend, she was disposable. She could be dropped in an instant in favor of someone hotter, faster, prettier, looser and, to my shame and regret, that’s exactly what I eventually did.

I was raised to know better and to behave better. If you’re lucky like I was, you have parents who teach you right, and it starts early. You have to treat girls with respect, my mother pounded into us over and over, especially about my sister who is six years younger than me. Some of my earliest memories are of my mother telling me and my brother Frank not to tease her or conspire against her to get her in trouble. I remember my mother telling me repeatedly to look out for my sister and other girls we played with on the playground or up at the rec center. There was one time in Germany in the '50s when I got in a fight with a kid on the playground because he was pushing one of the girls around. There was a bloody nose, and Army medics were called. But I didn’t get in trouble with my parents when they found out what the fight was about, and my father stood up for me when he got called in by a colonel to answer for what had happened on the playground that day.

But most of all I remember a day when I was in the eighth grade at George S. Patton Jr. Junior High School at Fort Leavenworth, Kansas, back in 1960. The principal came on classroom loudspeakers and made an announcement that Friday we would have a Sadie Hawkins Day sock hop in the gym. The teachers read the rules off a mimeographed sheet of paper. Girls would ask boys to the hop, and in order to make sure nobody’s feelings got hurt and everything would be fair, if a girl asked, you had to accept unless you intended to not attend the hop at all.

That afternoon I got off the bus and took up a post in a chair by the phone in the kitchen. Naturally, my mother noticed that I wasn’t gobbling down a snack and hurrying outside and she asked what was up. I told her and continued to wait by the phone. Suddenly it rang and I picked up. It was Pat Jackson, the girl who had her locker next to mine. We were friends and I liked her, but my hormonally enhanced auditory canals had picked up whispers that Wendy Wilson, considered by all to be the prettiest girl in the class, was going to ask me. So when Pat asked, I said I already had a date to the hop and quickly hung up.

My mother noticed I was still waiting by the phone and asked why. I told her I was waiting for Wendy Wilson to call. But who was that on the phone, she asked. When I told her it was Pat Jackson, she knew in an instant I had lied and turned her down. My mother stood over me angrily and said, You pick that phone up and you call Pat Jackson back and you tell her you lied to her and you apologize and tell her you will be happy to go to the Sadie Hawkins Day hop if she’ll have you. I tried begging for about two seconds. She pointed at the phone and said I’d spend the rest of the year in my room if I didn’t do exactly as she said. I did. Pat was gracious in accepting my apology and said she was delighted I was going with her. Of course shortly later, Wendy Wilson called, and I had to tell her I had already been asked by Pat.

On Friday Pat and her father picked me up in the family car and we went to the hop. Word had gotten around about what I had tried to pull with Pat, and I thought my name was mud, but half the girls in the class wanted to dance with me, Wendy Wilson the first among them. They were friends of Pat and I was the guy who had tried to wriggle out of going with her and admitted it and treated her right.

Isn’t that what it comes down to? Men treating women right? Fifty-seven years ago, my mother and those girls taught me a lesson that even though I remember it all these years later, I never really learned. Last week Susan Brownmiller posted on her Facebook page that sexual harassment was named and defined at a women’s speak-out in Ithaca, New York, in 1975, 42 years ago. Susan and Mary Breasted and Robin Reisig and Vivian Gornick and Lucy Komisar and others came up with lessons that obviously many of us, including me, have yet to learn. It’s a measure of how thick men’s skulls are and how congenitally immune we are to repeated shame and embarrassment that guys like me haven’t learned from what women have gently taught us over all these years. It doesn’t take a Bill O’Reilly to understand that something dark lies down there on the floor next to our beds. I know it’s there because I’ve been stepping in it every time I get up in the morning.