Trump has staffed the West Wing with low-grade hucksters, and his dealmaking skills are just bad poker bluffs 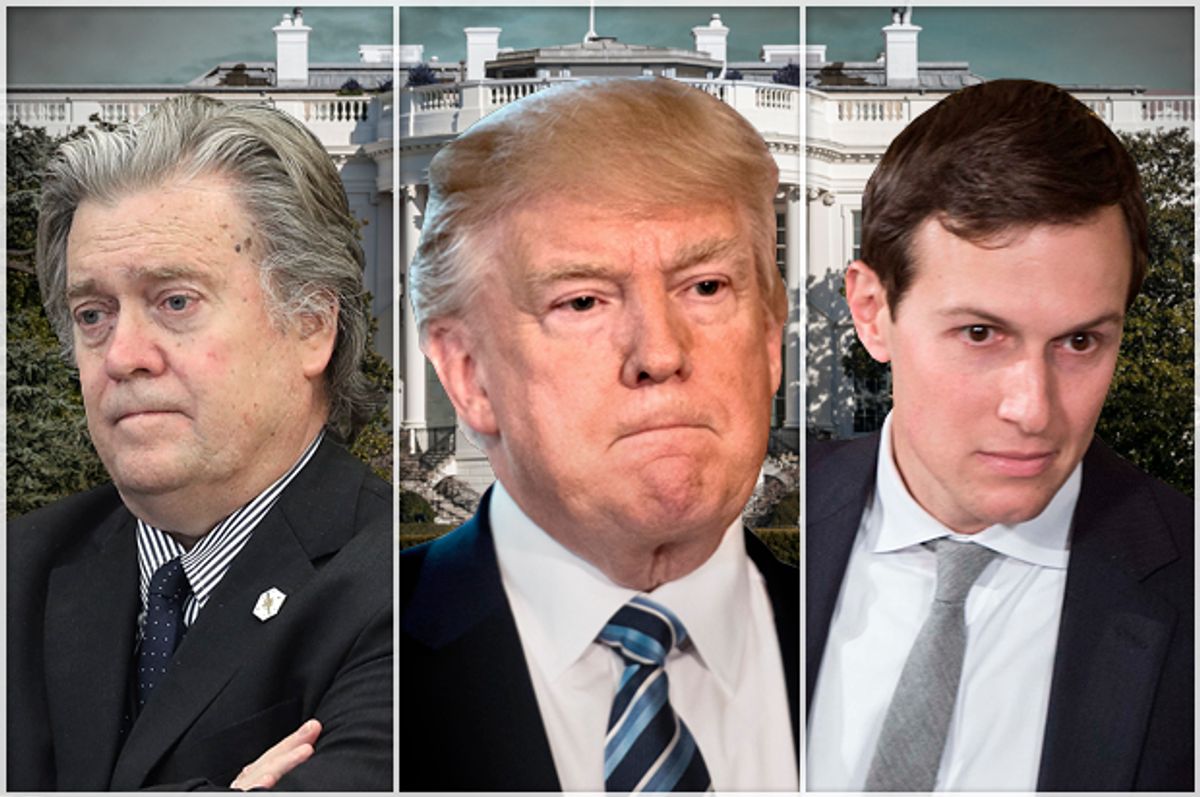 Saturday will mark the 100th year — sorry, the 100th day — of Donald Trump’s presidency. And what a white-knuckle ride it has been for the world.

The obsession with a president’s accomplishments in the first 100 days of a presidency is often maddening. But it can also be useful, in that the way a new administration handles all these challenges can set the tone for the next four to eight years and determine whether it will go down in history as a success or failure.

After 100 days, we can say this about Donald Trump and his team: History will not be kind.

At the rate Trump is going, the internet could run out of space, long before he leaves office, cataloging all his administration’s deficiencies as a functional entity, its destruction of governing norms and the hash it has made of both domestic and foreign policy. But two observations from the first 100 days stand out to me.

The first is the extent to which Trump’s struggles can be attributed to his pronounced tendency to staff his administration with mediocre, two-bit hustlers and con men whose careers indicate that they have a lot more luck than smarts or talent.

Two profiles published this week drive home this point. The first is The New Yorker's look at the Hollywood career of Steve Bannon, Trump’s "senior strategist," whose nationalist policies, bungled initiatives and, most important to a president who loves to be the center of attention, increased media profile have quickly reduced Bannon's influence in the West Wing.

The myth surrounding Bannon is one of a conservative who, through sheer pluck and hard work, carved out a place in ultraliberal Hollywood to make well-regarded documentaries with right-wing themes. In this telling, Bannon is sort of a guerrilla filmmaker operating behind enemy lines, making movies and running Breitbart News as he helped build the propaganda machine that Trump rode to the White House.

In The New Yorker’s telling, he was like thousands of low-level self-proclaimed movie industry geniuses with an ego the size of Rhode Island, hustling and scraping for deals and money to get his projects off the ground. Or as one source who worked with him told the article’s author:

“What I saw was a smart guy, who was funny and likable and enjoyable, who had a quick laugh, who was ineffectual” . . . Bannon “was one of those guys who always had big stuff about to happen,” he said. “But, after a quarter or two or seven, you become highly skeptical. Ultimately, we parted ways.”

Tellingly, people who knew Bannon in that era describe him as wanting to “destroy the Hollywood establishment.” Having failed to do that, he switched his target to the Washington establishment. He has had about as much success in D.C. as he had in Los Angeles, having become an impediment to functional government, with disastrous consequences for his boss’ administration.

The other profile is a BuzzFeed feature on Sebastian Gorka, who worked for Bannon at Breitbart before being named as a counterterrorism adviser in the Trump administration. As the British-born son of Hungarian émigrés, Gorka returned to Hungary in his early 20s, determined to make some sort of mark as a national security expert and political figure. Instead, he became known as, as BuzzFeed noted, a “self-promoter, who exaggerated claims about his past,” a hustler who inflated his credentials in an ultimately doomed bid for fame.

The fact that a BS artist like Gorka has failed upward into the White House is, as BuzzFeed makes clear, a source of endless hilarity to the Hungarians who know him.

That Trump would surround himself with mediocrities on the back end of less-than-illustrious careers should not surprise anyone familiar with the casts of Trump’s “Celebrity Apprentice.” It turns out, though, that having an eye for D-list talent doesn’t really translate into being the leader of the free world. Who knew?

The second observation that stands out about the president’s first 100 days in office is just how thoroughly his self-created image as the consummate deal-maker has been punctured and deflated.

For all the vaunted negotiating skill that Trump bragged about during his campaign, he has shown himself to be a paper tiger. There is a long list of deals and ultimatums from which Trump has backed down from at the first hint of pushback — Obamacare repeal, making Mexico pay for the wall, the nuclear deal with Iran, his rejections of NATO and the North American Free Trade Agreement and quite a few others.

Trump’s dealmaking abilities were supposed to be his big selling point. But what he has principally demonstrated in 100 days as president is a pattern of trying to shake down his opponents for money, then backing off when the other party pushes back. Congressional Democrats have duly noted the president's tendency to back down when confronted. More ominously, so have other nations.

A blustering, easily cowed president surrounded by venal and untalented washouts. Only 1,360 days until they leave office, after doing what we can only hope will be minimal damage to the country and the world.