Welcome to the new Age of Revolution: No, it isn't over yet, and we have no idea where it's going

It goes far beyond Trump and Brexit and Le Pen — it's a massive social and political crisis, and we can't ignore it 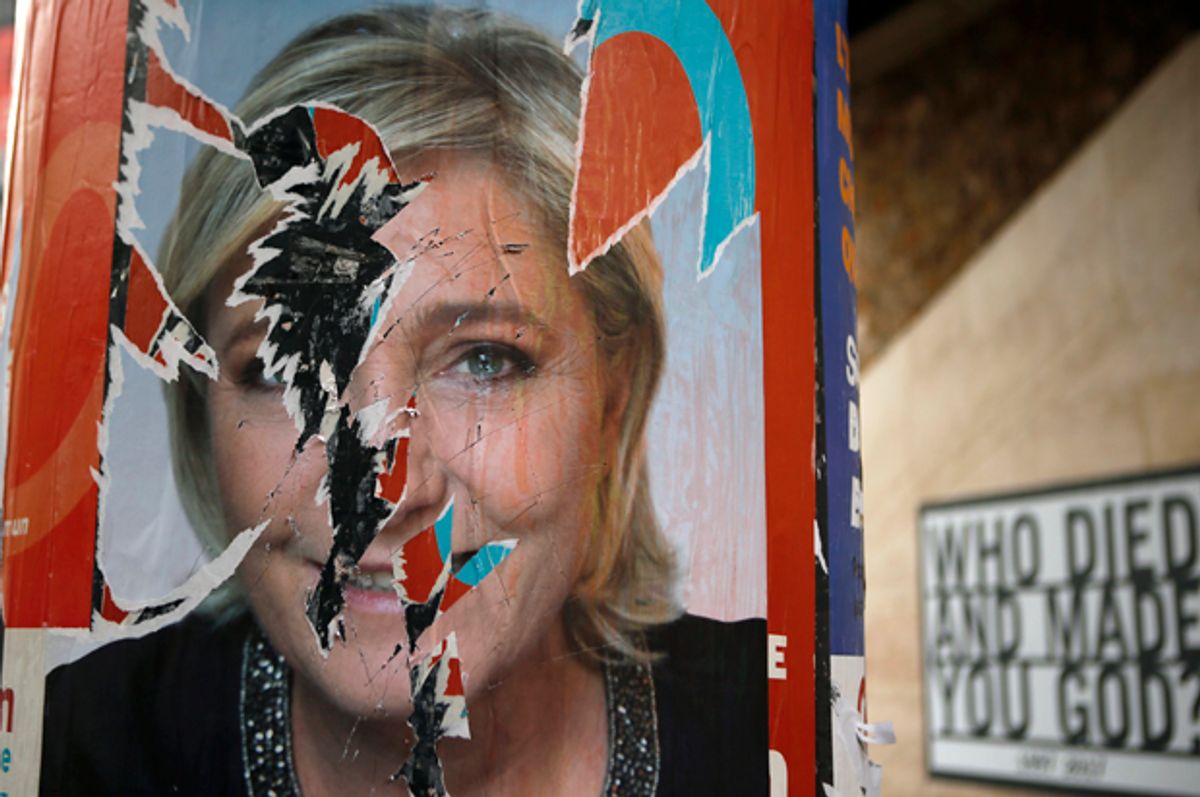 Many years ago, when I was in college, I played the role of Coulmier in a production of Peter Weiss’ groundbreaking play “Marat/Sade.” It was the apex of my brief acting career, during which I always wanted to play the romantic lead and invariably wound up cast as a pompous authority figure: Egeus, Hermia’s windbag father, in “A Midsummer Night’s Dream”; a high school principal in a 1950s farce called “Our Miss Brooks.”

Coulmier is the director of the asylum at Charenton, where the inmates — under the direction of the Marquis de Sade — are performing a play about the French revolutionary leader Jean-Paul Marat, who was murdered in his bath by a woman named Charlotte Corday. (Yes, it’s a play within a play: Avant-garde theater!) One of the play’s conceits is that Coulmier sits in the audience, which supposedly consists of Parisian aristocrats visiting for the day to witness the freak show. Occasionally he interrupts the action, seeking to exercise his authority or apologizing for the quality of the entertainment.

Essentially the character is an extended joke on the fragility and stupidity of power: Coulmier fails to grasp the meaning of either the play he’s in — in which the inmates are literally taking over the asylum — or the one he’s watching, which in its own distorted form captures the violent energy and intellectual ferment of the French Revolution. He believes he’s in control of the situation, and cannot see what the modern audience is meant to see, that his power is already gone and history has passed him by.

Across the Western world in 2017, much of the political and media caste is stuck in the role of Coulmier. Faced with a sudden and unexpected age of revolution that is unfolding around the globe in unpredictable fashion, the “thought leaders” largely don’t understand the nature of the drama they are witnessing — or the fact that they do not stand outside it as onlookers, but are important characters who have been stripped of authority and made to look foolish.

I raised this idea that we are in a new age of revolution, even if is not readily visible as such, in a column last week about whether the Western model of representative or parliamentary democracy is doomed. “Revolution” is perhaps an overloaded term that suggests underground encampments and people wearing bandoliers and consulting maps; one could also say turmoil or upheaval or widespread but inchoate revolt. But I think the concept is worth taking seriously.

Of course I’m talking about Donald Trump and Brexit and Marine Le Pen and the rise of both right-wing and left-wing populism on a scale the technocrats and neoliberals believed was no longer possible. But those things are symptoms rather than causes. The real issue is something much larger: the unprecedented collapse of social and political institutions that in most cases still exist but have lost much of their prestige and authority. This crisis is broader than the realm of conventional politics, encompassing such things as class conflict, racial and tribal identity, resurgent nationalism and the decay of any shared notion of reality. “Fake news” is anything you tell me that I don’t want to hear, in a context where we can’t even agree which facts are actually facts.

For the Coulmier class, all of this is unthinkable: They represent these collapsing institutions -- sometimes they are those institutions -- so the collapse cannot really be happening. Leading political figures and the mainstream commentators who validate their zero-sum game of partisan warfare have been indoctrinated to believe that their power is eternal and their wisdom infallible. (Such is always the fallacious viewpoint of the ancien régime.)

Faced with evidence that their power is fading and that their conventional wisdom was completely wrong, they must constantly reassure themselves that none of this is a sign of structural failure. Instead it’s an unexplained but temporary anomaly, an underground leak in the plumbing of democracy that will soon be repaired. Their shared assumption that politics and society have always functioned a certain way, and always will, prevents them from perceiving that “always” ended some time ago.

Even if we stay within the most visible political symptoms, the dimensions of the crisis are clear enough. Partisan identification in the United States has hit an all-time low, something that both parties continue to pretend is not happening. (Mainstream political science largely insists that “independents” don’t exist or don’t matter; they are just Democrats or Republicans who for some superficial, trendy reason decline to be labeled.) American politics has become not just polarized and paralyzed but deeply paradoxical: Republicans hold unprecedented power in Washington and across the country, yet their policies remain widely unpopular; Democrats advocate positions supported by large majorities, yet seem incapable of gaining power or wielding it effectively.

In the French presidential election, more than 70 percent of voters rejected both of the center-right and center-left parties that have won every previous election in the 58-year history of the Fifth Republic. The two finalists are the leader of a neofascist party previously viewed as anathema and a Potemkin candidate who has never held political office, representing an imaginary party concocted out of thin air. In a display of hilarious pathos, that latter candidate, former investment banker Emmanuel Macron, is being greeted with a collective sigh of relief by the Coulmier class: At last the nightmare is over and normalcy will be restored! Since the French establishment essentially invented Macron to save itself from the far right and far left, this is like telling your kids that the eggs you hid in the backyard last night prove the Easter Bunny is real.

Sometimes this new age of revolution actually looks like one: Parisian radicals took to the streets after the election to protest a final-round choice between the same old neoliberal austerity politics (in a new package) and something much worse. NRA head Wayne LaPierre darkly warns his followers that the “violent left” is coming, and they must remain armed and vigilant. As my colleague Matthew Sheffield has reported, neo-Nazis of the “alt-right” — disillusioned with Donald Trump and his “cuckservative” compromises — are openly seeking confrontation with leftist “antifa” protesters, in hopes of sparking a national race war.

But most of the time it’s not that obvious. The Democratic Party’s unresolved identity crisis, for instance — which is understandably maddening to many progressives — is not about what it appears to be about. Hillary Clinton and Bernie Sanders, at this point, are signifiers for a deeper existential or epistemological divide, which isn’t really a dispute over whether economic justice issues should have primacy over civil rights and women’s rights, or the other way around. (As I have previously observed, any progressive who claims those things can be disentangled is not a progressive at all.) Simplistic claims that Sanders represents a movement of white frat-boy dilettantes, or that coalition-building Clintonites don’t care about economic inequality, are insulting to both sides.

As many Clinton defenders observed in puzzled tones during the 2016 primary campaign, in terms of policy the two candidates weren’t that far apart. The difference between them — and the great chasm of understanding that divides the left-liberal coalition — is not about policies but about worldview. The essential question is one of perception: Are we living through an age of revolution that cannot be reversed, or just a bizarre interlude after which the old order will be restored? To be clear, this isn’t quite the same as the old-time leftist question about whether or not revolution is a good idea. That's a moot point. It’s about whether an age of revolution is here, one that demands — or will enforce — major systemic change, whether we like it or not.

I suppose it’s obvious that I favor one side of this argument over the other, but anyone who claims to have a clear and certain understanding of the current situation has already fallen into the Coulmier fallacy. The reformist case made by mainstream Democrats is not inherently ludicrous. If we held presidential elections by national popular vote, as the French do, Hillary Clinton would be in the White House today. In the centrist-liberal reading of events, our democratic system has suffered a severe shock but remains resilient enough. After 2018 or 2020, or at any rate after some electoral horizon in the undefined future, everything will be different. In the long term, demographic change, majoritarian principles and rational standards of good government will win out over the irrational and emotional forces of destruction.

It's hard to lay that out without snickering a little -- but, hell, what do I know? They could be right. Maybe the right kind of organizing can rebuild trust and participation and party identity and all the other things that basically don't exist anymore. It will no doubt be an easier adjustment for all of us if they are right, because if the revolutionary energy of the last few years is still accelerating, then the Democratic Party — under any possible leadership — and the other major political and social institutions of the Western world will not be able to contain it. We are all in danger of playing Coulmier, in a drama whose conclusion we cannot imagine.