Marine Le Pen's neofascist movement was fueled by lingering resentment over a military humiliation. Maybe ours too 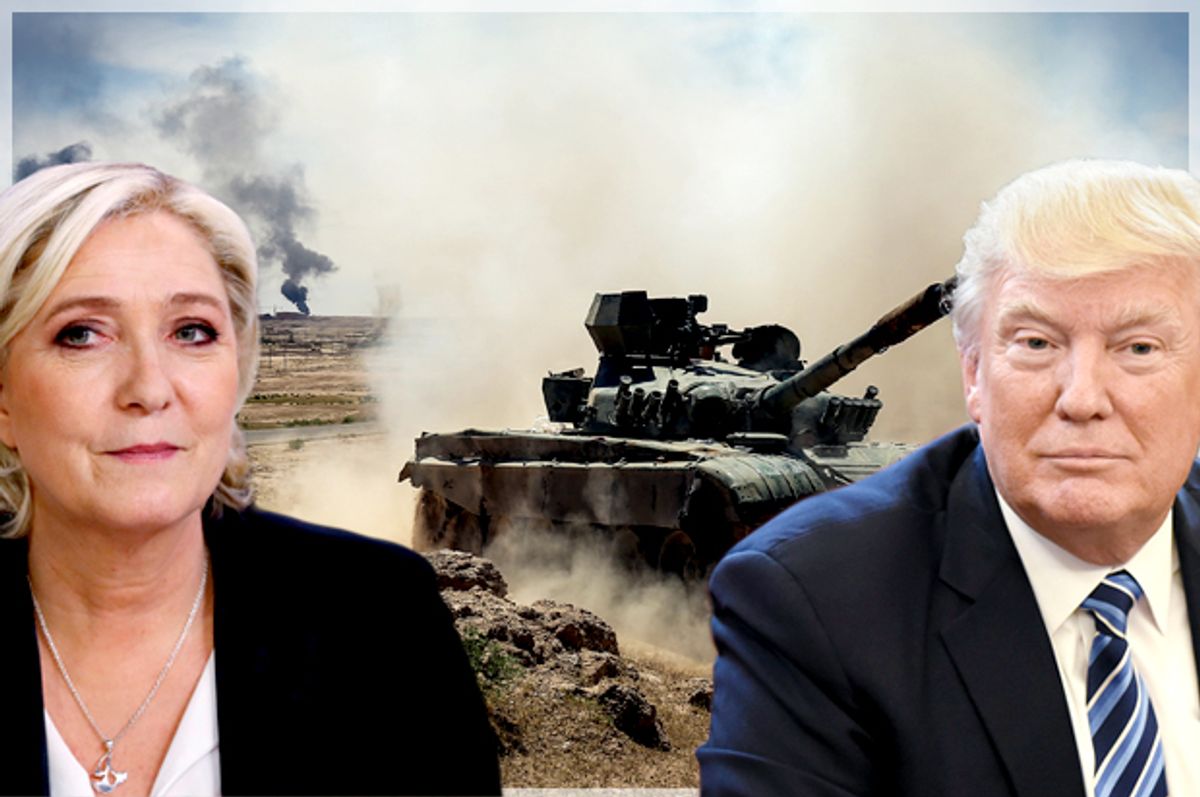 Last Sunday, the French held the first round of their presidential election. Emmanuel Macron won just over 24 percent of the vote, and 21.3 percent of voters cast their ballots for Marine Le Pen. There will be a runoff on May 7 — as in every previous French presidential election under their current system, neither candidate won the absolute majority necessary for an outright victory — in which Macron is the heavy favorite.

That is good news for the French and for Americans. Macron is a liberal centrist who is committed to the European Union. If he wins, Macron will reinforce others like Germany’s Angela Merkel as bulwarks against the undemocratic, nationalist far right that has made gains across Europe. The very fact that a neofascist like Le Pen attracted so many voters in France’s elections is disconcerting but not terribly shocking. After all, when France fell to Nazi Germany in June 1940, there were plenty of French men and women who supported the Vichy government of Marshal Philippe Pétain, who was a puppet of Berlin. Vichy and the Third Reich fell, ushering in the liberal order that has shaped international relations in the post–World War II era -- but fascism was never fully extinguished in France.

Le Pen’s father, Jean-Marie, who led the National Front until his daughter ousted him, was a supporter of the Vichy regime, but there was another conflict in the country’s history that nurtured contemporary French fascism. That was the Algerian Revolution, or Algerian War of Independence, which lasted a little more than seven bloody years between Nov. 1, 1954, and March 19, 1962. That conflict and its aftermath have lessons for the United States and its own wars in the Middle East.

A lot of the commentary on Marine Le Pen traces the roots of her worldview to her father. That makes sense, of course. If people know anything about Jean-Marie Le Pen, it is that he is an anti-Semite — he once called the Holocaust a “detail in the history of the Second World War” — and a French nationalist. As the founder and leader of the National Front, he peddled fascism during the 1970s on the margins of French politics until he repackaged his views in a more acceptable discourse about immigration and Euro-skepticism and made political gains in the 1980s and 1990s.

The senior Le Pen's high-water mark was reaching the second round of the 2002 presidential elections, in which he was crushed by incumbent President Jacques Chirac, who won 82 percent of the vote. Le Pen had served for a short time as a paratrooper in in Algeria. The so-called “Paras” — made infamous in the 1966 film "The Battle of Algiers" and Alistair Horne’s book "A Savage War of Peace" — played a central role in France’s war in Algeria. They employed brutal tactics, especially in the Paras’ efforts to pacify the Algiers casbah. Ahead of the 2002 election, the French daily Le Monde published allegations that Le Pen tortured Algerian prisoners. He denied it at the time, though decades earlier he admitted that he participated in this crime, declaring, “I tortured because it was necessary.”

What Jean-Marie Le Pen did in Algeria is a window into his own worldview and likely that of his daughter, even though they no longer speak to each other. The personal history of the Le Pens is interesting, but what's more important is the way the Algerian conflict still casts a long shadow over French politics, and the way it has played into the nationalism and neofascism that still appeal to a significant portion of the French electorate. The war, France’s withdrawal from Algeria, and the North African nation's journey to independence were collectively a searing experience that polarized and radicalized politics.

The French arrived in Algeria in 1830 in what turned out to be a colonial project that lasted for 132 years, making it one of the most thoroughly colonized places in the world. The French leadership’s goal was to make Algeria an overseas department of France. Toward that end, the French poured settlers into the country in an effort to remake the country and in the process tighten Algeria’s political, social, economic and cultural connections to what is called "metropolitan France."

As l’Algérie française proceeded, its society became highly stratified. The French settlers, Francophone Algerians, and Algerian Jews were privileged at the expense of the majority Arab and Muslim populations. Throughout this period there was resistance to the French, some of which coalesced around Islamist figures, but not until the Front de Libération Nationale announced its intention to push the French from Algeria was this effort organized and focused as an actual threat to French hegemony.

Despite more than a century of French efforts to alter Algerian society, and because French policy discriminated against Arabic-speaking Muslims, Algerian identity developed and proved resilient. One of the arresting slogans of the revolution was “Arabic is my language, Islam is my religion, Algeria is my country.” The end of Algeria’s long and bloody struggle began when French World War II hero Charles de Gaulle returned to politics in 1958 after an absence of a dozen years, largely in response to a rebellion among the paratroopers and politicians who were committed to the idea of French Algeria. De Gaulle rapidly came to the conclusion that control of Algeria was unsustainable. In 1962, French forces withdrew and Algeria declared independence.

With the French withdrawal came the bitterness of the French settlers, whose entire world vanished in what must have seemed like an instant. During and after the Algerian war, an estimated 1.5 million French nationals left Algeria for mainland France, a country where virtually none of them had been born and some had never visited. To French liberals, these people harbored retrograde views about Islam, Arabs and indigenous North African culture. They had once been privileged but were now seen as losers as de Gaulle and the Fifth Republic defined France’s postwar liberal and Eurocentric trajectory.

The far-right nationalists, settlers, military officers, and demobilized Paras nurtured wounds of a world lost, a war they believed could have been won, and the sullying of French power. The ensuing 55 years have transformed Algeria-specific resentments into a more generalized dissatisfaction, reflected in the rage with which the 7.6 million voters who cast their ballots for Marine Le Pen view the European Union, the liberal order, immigrants and the imagined insults to French culture and identity from the convergence of all three.

Are there parallels or lessons from the French story for Americans? The United States has been engaged in two long wars in the Muslim world — in Iraq and Afghanistan, the latter of which is now the longest conflict in American history. It is Iraq that is more instructive, however. The American project in Iraq never intended the long-term colonization that the French sought in Algeria, but the George W. Bush administration did seek to remake Iraqi society. The violent overthrow of Iraq’s political and social institutions, however, tripped the country into continuous spasms of violence for which the military and civilian planners of Operation Iraqi Freedom seemed totally unprepared. When President Barack Obama pulled the plug on combat operations in December 2011, declared victory and withdrew U.S. forces from Iraq, Americans had been through eight years of bloody and inconclusive warfare.

The end of combat operations in Iraq also bred resentment. Of course, there were no settlers to evacuate, but there was nevertheless a sense of betrayal among certain segments of both the political class and the people who bore the brunt of endless deployments, grievously injured relatives, and a society that had grown ever more deeply polarized over the war. There was no post-Vietnam–like backlash against the soldiers who fought in Iraq, but Americans thanked them for their service and then mostly averted their eyes from the violent mess that Iraq had become. The fallout from the 2008 financial crisis, combined with a broad-based effort to delegitimize the first African-American president of the United States, only fueled the resentment of a political class whose members insulated themselves from their own worst decisions and policies.

Under these circumstances, no one should be surprised that when President Donald Trump thundered about a rigged political system during his campaign and declared Iraq a waste of money that would have been better used “to rebuild America,” he was met with rapturous crowds who valued his truth-telling. There are, of course, multiple and complex reasons for the resilience of fascism in France and the mainstreaming of nationalist sentiment in the United States. But it seems clear that the misguided, deeply frustrating and violent encounters both countries have experienced with the Middle East are among them.