"X-Men" actor Shawn Ashmore on his new thriller "Devil's Gate": "You get to explore your dreams and your nightmares" 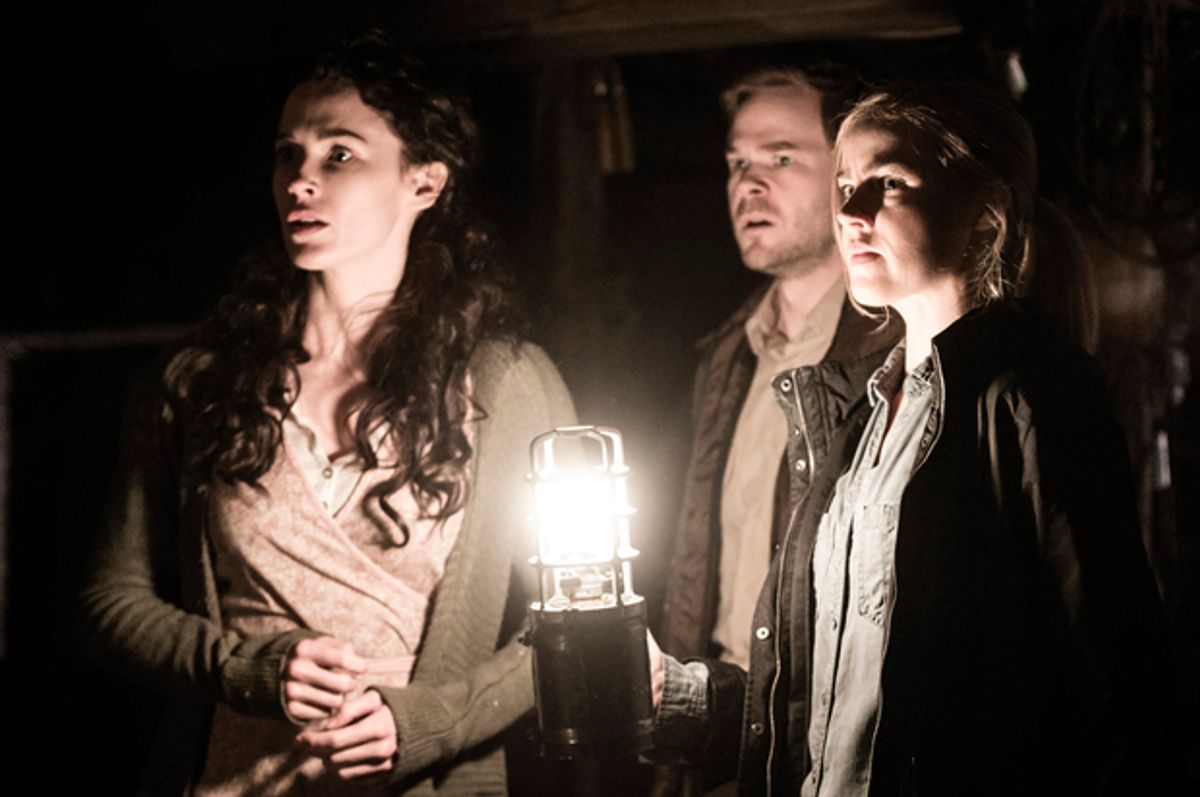 Shawn Ashmore is the comic relief in writer-director Clay Staub’s taut, atmospheric new thriller, "Devil's Gate." In the film, Ashmore’s character, Colt Slater, is a deputy in the title town who helps incoming FBI special agent Daria Francis (Amanda Schull) investigate the disappearance of Jackson Pritchard's (Milo Ventimiglia) wife and son. Slater accompanies Agent Francis to the Pritchard property, which is cordoned off with barbed wire and "No Trespassing" signs. Moments after their arrival, Pritchard is handcuffed and Francis ventures inside the house where she discovers “what's in the basement.” The drama gets intense with the reveal -- and it’s a doozy -- but Ashmore injects humor to lighten the dread.

The Canadian actor, who may be best known for his role as Bobby/Iceman in the “X-Men” movies — as well as his part as Mike Weston in the TV series “The Following” — met with Salon during the Tribeca Film Festival where “Devil’s Gate” premiered. He talked about his penchant for genre films, and what scares him.

Deputy Slater is seen doing a crossword puzzle in the film’s opening moments. Are you a puzzler?

No, I’m not. I’m horrible at crosswords. I’ve sat down and done them, but I wouldn’t say I’m an aficionado, or talented at a crossword.

I mention the crossword because part of what I like about Slater is that he’s a motormouth, and quick; he has a real mental agility. How did you develop the character’s voice and his quality? It’s a slow town, and he’s kind of hyper.

The way I’ve always thought about Colt is that he’s from a small town, but we all thought that he was intelligent and capable, and probably would run, mentally, a little faster than everybody else. I think he has aspirations, and that’s why he’s so excited when the FBI shows up. [His boss, Sheriff Gruenwell, played by Jonathan Frakes] is upset the FBI is there, whereas Colt is actually excited that someone from the big town is coming in. We need help on this case! The dialogue was in the script, but I thought he was a fast-talking guy; he thinks quickly, he reacts quickly. The humor was slightly goofball, because he’s a small-town guy.

Let’s talk about Colt’s physical qualities. He hauls a dead deer, he tackles Jackson Pritchard and he gets wounded in one scene. Can you talk about the physical work in the role?

It was a blast. I’m definitely a fan of being involved as much as I can from a physical standpoint. I enjoy that. The big stunt I get to do is being shot in the leg and taking a fall, and they did have a stunt performer do it, but I did it myself as well. Physicality in the film is fun. There are some things I don’t want to spoil, but the stunts are fun.

Yeah. I’m not a gym rat or someone who works out all the time, but I try to be as involved as I can in all the stunts. And that’s including stuff like “X-Men,” where you get to do wire work and fly around and all that. I enjoy that. It’s part of the process I like. I did a TV show called “The Following,” where we had fight scenes almost every episode, and I really liked the chance to be physical. It’s fun for me. One of the reasons I like physical stuff is you don’t have to act when you’re doing something strenuous. That deer that I pull out of the back of the truck [in “Devil’s Gate”] weighed like 150 pounds. It was like a dead body. I almost hurt my back doing it. I had no idea how heavy it was. When you see me almost drop it and flop around, that was not me being funny. It was that heavy. I find with physical work, you don’t have to act it.

What are your experiences with police and guns?

Well, I played an FBI agent for three years on a TV show. I’m Canadian, so I’ve never personally owned a gun. I’ve shot many guns, and trained with guns for films and roles, and I’ve met many law enforcement people, between police officers and FBI agents. I’ve played paramedics, so I went on an ambulance ride-along in Toronto, which was mind-blowing. I have spent much time with law enforcement. I respect them. I could never do it. I could never, ever, ever be in that position. It’s a very, very scary thing to do — putting yourself in harm’s way every day. That’s something I really respect but couldn’t do myself.

When you need the police, there is nothing more satisfying than seeing the blues show up and help you. I’ve been in situations like that, where I’ve had to call the police.

Wait. What sorts of situations have you been in where you’ve had to call the police?

My neighbor’s house was being broken into, so we called the police. I wasn’t in personal jeopardy or danger, but you didn’t know if they were home or what was happening. So that was really scary. And I had my car stolen once out of my driveway, and I had to call the police.

“Devil’s Gate” plays with elements of the supernatural. Are you drawn to those kinds of projects?

Yes. I’m a fan of genre work. Growing up, I read a lot of science fiction and fantasy. C.S. Lewis, the “Dune” series, Ursula Le Guin… it wasn’t the best adaptation, but I played Ged in [Le Guin’s] “Earthsea” in a miniseries for the Syfy channel. I am definitely drawn to those things. I also read the “X-Men” comic books growing up. I like that kind of stuff.

Why are you drawn to it?

You tend to play ordinary people put in extraordinary situations. It’s heightened reality, which allows for drama. That’s what I like about that; you get to see how they react. That’s what science fiction, fantasy and those things do. It’s not necessarily something that exists in our real lives, but it’s something we all dream about, things that we hope [for] and things that we’re terribly afraid of. As an actor, you then get to explore all those things that you don’t necessarily get to explore on a day-to-day basis, but that you deal with in your dreams and your nightmares. It’s enjoyable, and a challenge.

I’ve never been in a real life-and-death situation -- that’s not true, I have been, but not in the way I have been in films and television, so it’s hard to say I’m bringing my real-life experience to this performance. That’s not what’s happening. You’re using your pure imagination to create a situation or scenario you’ve never been in. And that’s the challenge, and fun, and make-believe of acting.

Colt is the comic relief, but at times he’s the voice of reason. He’s also grace under pressure. How did you develop that aspect of his character given the situations he finds himself in?

What I liked about Colt was that he did have a strong moral compass. When Jackson goes into the basement, Colt has to make a moral decision to go along with what Jackson wants to do. Colt starts out as an aw-shucks, Podunk deputy, but by the end of the film he has some real heroism and a real change of character. So what emotional levels do you bring to that? I toy with the idea: Should he be crying and emotional? He’s scared shitless!

Speaking of the basement, would you, seeing the door bolted shut, open it and go in the basement?

No. No! I actually have an extreme curiosity, but I have a stronger sense of fear and preservation, I guess. I’ve had some strange, supernatural experiences, you could say, and nothing scares me worse than the unknown. From a film perspective, I can handle slasher films, I can handle zombie films, I can handle those things. There’s something tangible; you can fight the physical. I’m very scared of ghost stories, possession stories. How do you fight that? How do you control that? If there’s a Zombie apocalypse, you take an axe and start chopping. It’s how you defend yourself. But something like “The Exorcist,” that’s still one of the scariest films. The concept of being out of control — that’s what’s really scary to me. So I probably wouldn’t go into the basement. I’d want to, but I wouldn’t do it. I’m just being real.

When you say you've had supernatural and uncanny experiences, what do you mean?

I’ve had several experiences like that with unexplained things, and not scary — not like something trying to hurt you — but unexplained things. And that’s terrifying. I’m still scared of that. I was staying in a hotel in Romania, and my room was haunted. That’s all I can say. There was somebody walking — footsteps in my room for six weeks, glasses clinking — I didn’t see anything — it wasn’t scary, or trying to get me or talking to me. There was just somebody walking in my room every night, and it scared me.

Does anything else scare you?

I have a fear of a lack of control. I travel a lot, and I’m away from my loved ones a lot. I have this fear of not being there when people need me. It’s not a physical fear of something very specific, but I have that fear of not having control. Also, I’m claustrophobic. As a kid, I still remember the panic that set in. We had a bunch of friends over and we were wrestling and playing, and somebody threw a blanket over my head, and we had a pile-on — you know, like a dog-pile. I was not afraid when it was just people, but being wrapped in the blanket and having bodies on me, it just freaked me out. I remember having a panic attack as a kid. Ever since then, I’ve been claustrophobic.

I’ve had to experience that on shows or in films. I was in the back of a trunk one time, and I read it and thought, “I can do this,” but on the day, they were going to put me in the trunk and close the door, and I was like, “Whoa! I’m not sure I can actually handle this!” But I did, and I survived.