Trump invites Rodrigo Duterte, the Philippines' murderous authoritarian leader, to the White House: Why should we be surprised?

The Philippine president has compared himself to Hitler and vowed to kill 3 million people. Now he's Trump's BFF 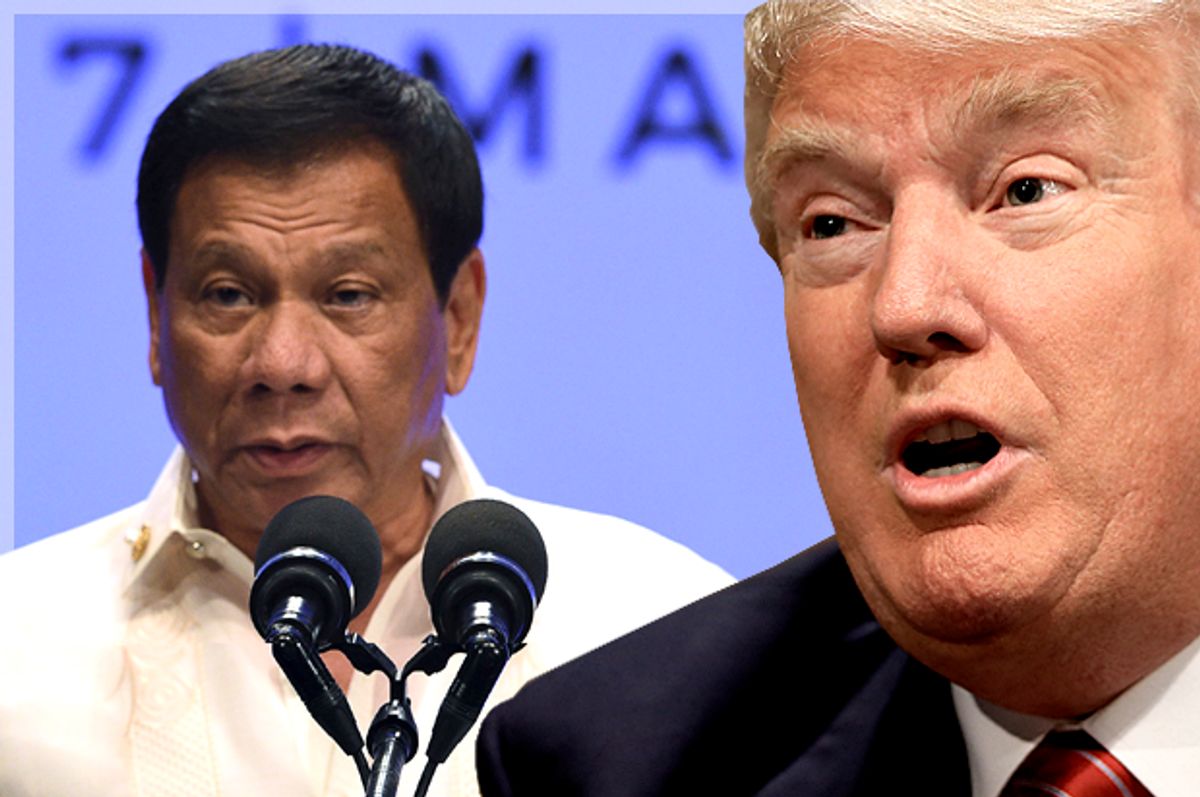 A few weeks ago the Pulitzer Prize for breaking news photography was awarded to a freelance photojournalist named Daniel Berehulak for a multimedia report that was published in The New York Times in December called "They Are Slaughtering Us Like Animals." It documented the deaths of 57 homicide victims in the Philippine government's brutal campaign against drug users and dealers. The photographer had this comment upon winning the prize:

The story is indeed important. Those photographs document the grotesque campaign of terror in the Philippines, which experts believe has left more than 7,000 people dead in less than a year from extrajudicial killings at the hands of police and vigilantes.

The Philippines is currently run by President Rodrigo Duterte, who won the election last June after his final campaign speech, when he said, "Forget the laws on human rights; if I make it to the presidential palace, I will do just what I did as mayor [of the coastal city of Davao]. You drug pushers, holdup men and do-nothings, you better go out because I'd kill you." He kept to his word, telling his police forces the day after he was sworn in, "Do your duty, and in the process, [if] you kill 1,000 persons, I will protect you." Last September Duterte proudly compared himself to Adolf Hitler:

Hitler massacred 3 million Jews. Now there is 3 million, what is it, 3 million drug addicts [in the Philippines], there are. I'd be happy to slaughter them. At least if Germany had Hitler, the Philippines would have [me]. You know, my victims, I would like to be all criminals, to finish the problem of my country and save the next generation from perdition.

Duterte admitted to being a murderer, and not in the abstract sense of being a leader who orders killing by others. He says he has personally pulled the trigger. As the New York Times reported in December:

“I killed about three of them because there were three of them,” Mr. Duterte told reporters at a news conference in Manila, the capital. “I don’t really know how many bullets from my gun went inside their bodies.”

“It happened. I cannot lie about it,” he said in English.

The remarks followed comments he made on Monday, when he told business leaders that as mayor, he had patrolled the streets on a motorcycle and killed criminal suspects in order to set an example to his police officers.

None of that stopped President-elect Donald Trump from chatting up Duterte after the election, telling him that he was going about his war on drugs "the right way." And last Saturday night the White House released a statement that the two men had had another "very friendly conversation," in which they had talked about regional security and "discussed the fact that the Philippine government is fighting very hard to rid its country of drugs." (That's one way of putting it.) It said that "President Trump enjoyed the conversation and looks forward to visiting the Philippines in November" for the East Asia Summit meeting.

Then the statement said that Trump had invited the admitted murderer and Hitler admirer, Rodrigo Duterte, to the White House.

According to The New York Times, White House aides were "slack-jawed" at the invitation and both the State Department and National Security Council were expected to object internally. The call was simply supposed to be part of a hand-holding exercise for Asian nations whose leaders were feeling neglected by Trump's single-minded focus on China, Japan and North Korea.

Reince Priebus tried to clean it up on ABC News' "This Week," saying that Trump was rounding up support against North Korea. That might make some sense if it weren't for the fact that Manila is 1,700 miles south of Pyongyang, and the Philippine navy can hardly defend its own coastline. North Korea has never shown any interest in the Philippines and it's fairly obvious that Donald Trump couldn't find either country on a map without color coding and multiple guesses.

No, Trump was making pro forma calls they told him to make and simply hit it off with the violent, authoritarian president of the Philippines. He's had similarly "warm" conversations and meetings with the autocratic leaders of Egypt and Turkey and, as he did on the campaign trail, he continues to praise Kim Jong Un for being a very impressive young man. Everyone knows in what high regard he holds Vladimir Putin.

Trump is a natural authoritarian and is drawn to others like him. It's obvious that he has little respect for constitutional principles. This weekend alone he has indicated that he wants to consolidate his power because he thinks the system is archaic and needs to be changed for the good of the country. His chief of staff said twice on Sunday that the Trump administration is "looking at" changing the First Amendment. Since he has put Jeff Sessions — a ruthless, doctrinaire drug warrior — in charge of federal law enforcement, it's possible that Trump's compliments on Duterte's brutal tactics might be more of a consultation about best methods and practices.

Even setting aside the president's autocratic temperament, Trump is also still involved in his family business. One cannot discount the fact that all the despots he has cultivated are leaders in countries in which he has ongoing deals or whose bankers are rumored to have business with him. (We don't know the specifics because Trump has refused to reveal the extent of his business ties or divest himself of them.)

Time magazine put together a handy map of all the deals that are public knowledge, and the locations include Egypt, Turkey and Russia, as well as other nations in Russia's economic orbit. But the deal with the Philippines is very big and very current, according to Time:

Trump Tower Manila is the most advanced of a series of Trump-branded buildings planned by property magnate Jose E.B. Antonio (though it remains under construction today, with scaffolding up, exposed pipes and breeze blocks stacked outside). Just before Trump's election, the Philippines appointed Antonio as its special envoy to the U.S.

For multiple, overlapping ideological and financial reasons, the president of the the United States has seen fit to invite a confessed murderer and brutal tyrant to the White House. That should alarm every one of us.