I know how Jimmy Kimmel feels: "No parent should have to decide if they can afford to save their child's life" 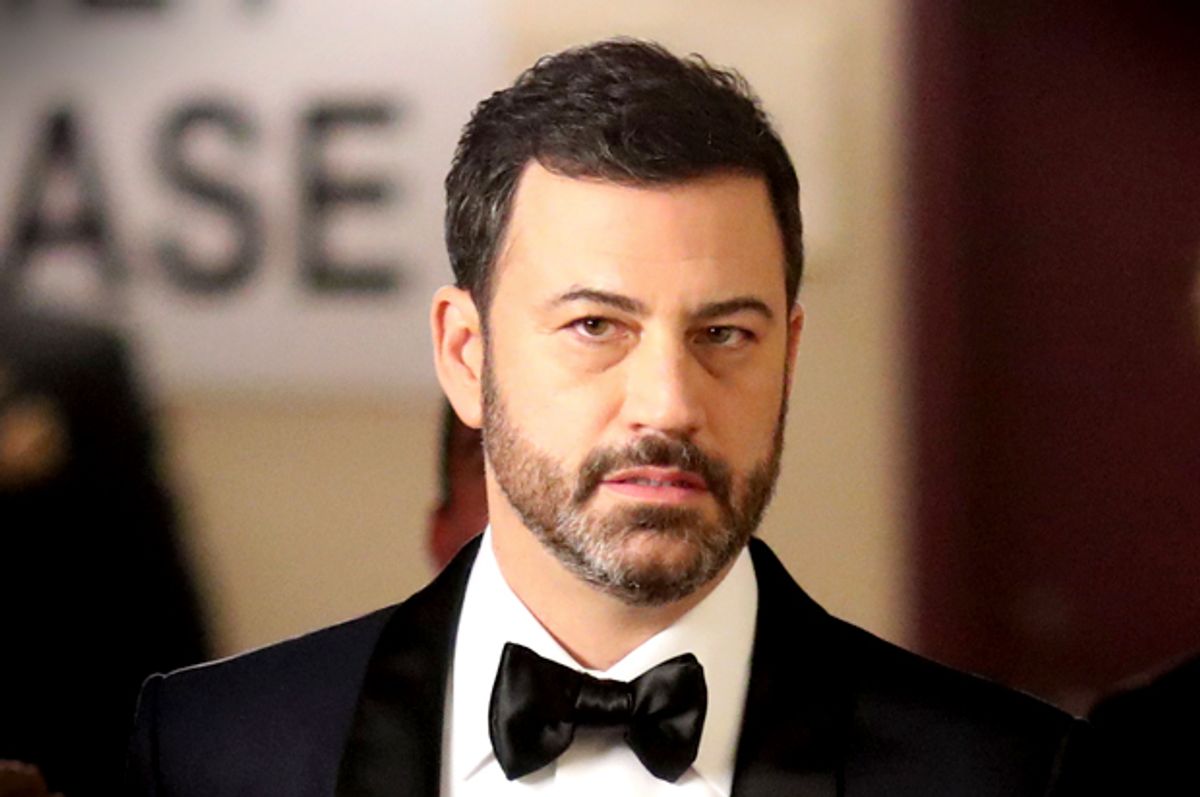 Dad Jimmy Kimmel is the best Jimmy Kimmel. Better than Oscars upset Kimmel. Better even than Matt Damon nemesis Kimmel. Two years ago, as California was still reeling from an unprecedented measles outbreak, Kimmel launched a ferocious, foulmouthed and sustained series of messages to parents who refuse to vaccinate their children. On Monday evening he was back swinging again, this time with a deeply personal message.

Returning to the air after a weeklong hiatus, Kimmel's voice was cracked with emotion right out of the gate. "Before I get into it, I want you to know it has a happy ending," he told the audience. "Don't get too upset. Leave that to me." Kimmel went on to say that on April 21, he and his wife Molly welcomed a new son, called Billy. About six hours later, something happened.

A nurse noticed the baby's coloring wasn't right — and quickly "more doctors and nurses and equipment come in, and it's terrifying," he said. "I'm standing in the middle of a lot of very worried looking people."

Kimmel explained that Jimmy had been born with a heart disease, and after putting his baby on an ambulance and enduring "the longest three hours of my life," he could report his son had a successful surgery — the first of others he will need to repair his ticker. Kimmel then shared a photo of what the baby had looked like a week prior — covered in tubes and tape — and what he looks like now, post-surgery. And he joked, “We had atheists praying for us, OK? And I hate to say it — even that son of a bitch Matt Damon sent flowers." He also appeared, unsurprisingly, a total goddamn wreck.

But what made his candid conversation about his experience so unique, intimate, was that Kimmel then tearfully thanked, by name, the members of the hospital team who had intervened for his child at Children’s Hospital Los Angeles. He then used his story as a platform to discuss health care and health care funding. "Trump last month proposed a $6 billion cut in funding to the National Institute of Health," he said.

"If your baby is going to die, and it doesn’t have to, it shouldn’t matter how much money you make," Kimmel said. "That’s something that, whether you’re a Republican or a Democrat or something else, we all agree on that, right? This isn’t football. There are no teams. We are the team; it’s the United States. Don’t let their partisan squabbles divide us on something every decent person wants. We need to take care of each other."

I know all too well how Kimmel feels. Last year my older daughter nearly died when a combination of two routine infections swerved into septic shock. She spent 36 hours in the emergency room and another four days in the ICU. My other daughter, meanwhile, is in treatment for obsessive-compulsive disorder, a condition for which there is no cure and she will continue to need help for over the foreseeable future. Health care — specifically the care we are outrageously lucky enough to receive at our local hospital — has saved and continues to save my children's lives, a fact brought acutely home to us recently when my spouse was laid off from his job.

Like Kimmel, I struggle with the cavalier cruelty of the current administration's determination to just let the bottom drop out for so many of us. I struggle with my profound anger and fear about it. Spend a couple of days in a ward full of frantic parents watching helplessly as their children are tethered to machines, and it'll do that to you. Hell, spend 30 seconds in a room where suddenly you're watching "more doctors and nurses and equipment coming in," and I promise you'll never be the same.

But you don't have to be a parent to understand right and wrong, compassion and mercy. Maybe you just watch a freelancer friend you love crowdfund and then die his way through leukemia. Maybe you just look at the explanation of benefits statements from the MRIs and CT scans you'll have the rest of your life after metastatic cancer, knowing without insurance you couldn't do any of it. Or maybe you're just trying to be a decent person. Because as Kimmel says, "No parent should have to decide if they can afford to save their child's life."