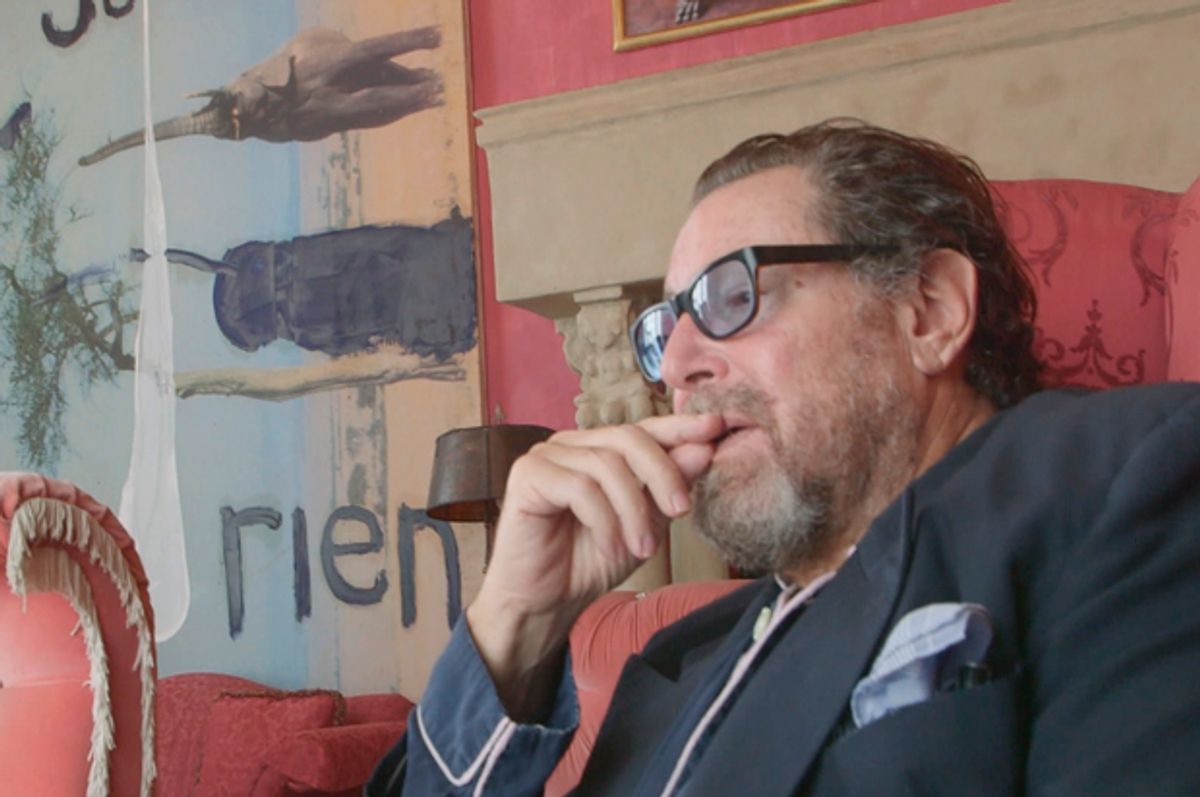 A film still from "Julian Schnabel: A Private Portrait"
--

Brilliant, talented, cantankerous, charming, Julian Schnabel is always near the lips in discussions of the art scene the late 20th and early 21st centuries — in part for his art, in part for his outsized personality.

Wrapping both into a sharp, engaging package is "Julian Schnabel: A Private Portrait," the new documentary from Pappi Corsicato. Tracing Schnabel’s life from his youth in Brownsville, Texas, to his early success in New York with gallery owner Mary Boone, through his career directing films, Corsicato taps Schnabel's sister and children for intimate, personal interviews. The film also uses talks with the artist's celebrity friends — Al Pacino, Willem Dafoe, Bono, performance artist Laurie Anderson, filmmaker Héctor Babenco and more — as a window onto his professional demeanor.

But the film’s focus is hardly limited to its subject’s gregarious persona and fascinating history. Schnabel’s art takes a deserving star turn. “A Private Portrait” showcases works illustrating his bold, taboo-breaking style, one that ignited so much of what went on in the art world of the 1980s. Schnabel's plate paintings and large canvases share the screen with his photographs, home movies and clips from three of his critically embraced feature films -- “Basquiat,” “Before Night Falls” and “The Diving Bell and the Butterfly” —  a well-rounded look at the man in full.

Recently, Schnabel spoke with Salon about art, life and the upcoming documentary.

In the film, gallery director Mary Boone says you and she were sensations in the art world because you both had a kind of  “arrogance and bravado.”

This "arrogance and bravado," is her concept . . . I think that we’re talking about two different things — leaning to the divine light and doing what you feel like doing, which doesn’t have anything to do with the art world or commerce. Getting engaged and trying to put your stuff out there, whether it’s an actor at an audition or an artist at a gallery who wants people to see their work. "Bravado" — I cringe at that.

Can you talk about your reputation for a larger-than-life persona?

"Larger than life…" My daughter Lola was pointing out that I should have claustrophobia. I don’t want to be in a small place. “The Diving Bell and the Butterfly” and Javier [Bardem] in the tight jail cell in “Before Night Falls” — there’s a whole graph of scale being locked inside your body. I don’t know what people mean by “larger than life.” You see the work I made. The paintings and films are in the movie. It justifies this bigger-than-life thing, that Pappi [Corsicato] wanted. He wanted to know what makes [me] tick. It’s difficult to stand outside of yourself and see it like that. I don’t know what that means.

I guess it’s basically all ultimately what I do. I’m more interested in the work and trying to get by every day. Obviously people have these impressions and it’s what Pappi wanted to present. It served his theme in the film. It’s his film. I thought he did a good job, but it was surprising that a lot of things that aren’t in it. But you do the best with what you can get and superimpose your will and sensibility on that — and that’s what you saw. Pappi is smart and has a charming, almost circuitous way about going about things. He is seeing and immersed in something, and it makes a portrait that is his version. And that’s okay.

My favorite comment in the film was from Héctor Babenco, who said you reminded him of a character in a Balzac novel.

[Laughs] Maybe he’s thinking more of [Rodin's] sculpture of Balzac. My favorite line from Hector was that he was jealous because I made the best risotto.

Lola, your daughter, says you're a workaholic and can’t separate work from life. You do work hard and play hard. Can you discuss that aspect of your personality?

Well, there is no separation between art and life. It is how it is. What you do every day makes you able to continue, and if you’re working and something happens and in the course of that, you feel better or more satisfied, you know what you need to do to achieve that sense. Maybe it’s why people meditate or do what they do — a surfer inside a wave, or someone climbing a mountain or making money — people might get off on that, but that’s not really interesting to me. I like to paint and make things. I like to write. I don’t have a plan really.

You directed films on Jean-Michel Basquiat, Reinaldo Arenas, and Jean-Dominique Bauby that provide insights into these artists and authors. They reflect creativity, both theirs and yours. Can you talk about these films as a form of self-portraits?

I didn’t say they were self-portraits. All movies in some ways are self-portraits. In “Mean Streets” and “Raging Bull,” Martin Scorsese gives you a portrait of his mind. [My films] are not biopics, but portraits or versions of people. I think Pappi’s film isn’t a bio. He’s selecting something that conforms with personal narrative. You can say that about any director. It’s a portrait of their point of view, their sensibility. People are their art. Tarkovsky’s “Andrei Rublev” or “Solaris” is Tarkovsky. “You are what you do,” Van Gogh said that. So talking about your work is less interesting to me, but the thing is: I am my work. My work is what I am. That came out in Pappi’s movie.