For the director of "Risk," filming Julian Assange became a spy game

When documentarian Laura Poitras covered the Wikileaks founder, she found herself in the crosshairs 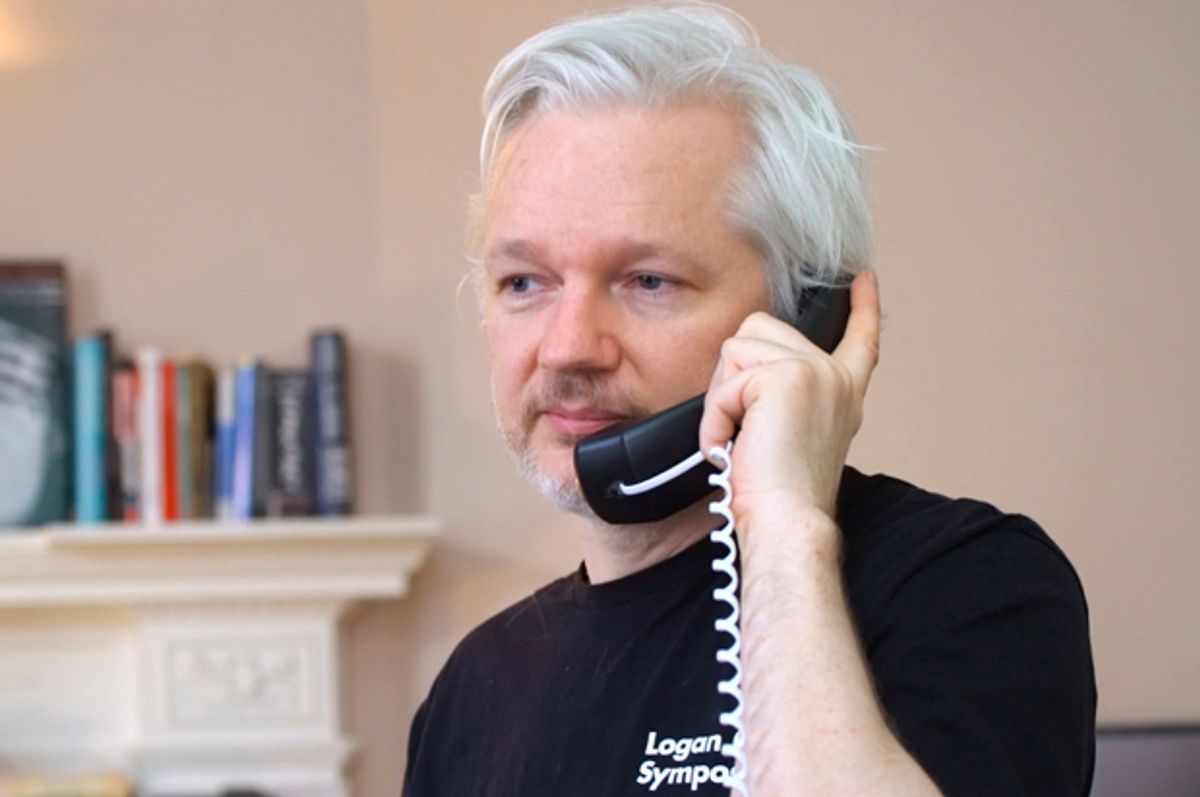 In her engaging new documentary, “Risk,” about Wikileaks founder Julian Assange, director Laura Poitras admits in a voice-over, “I can’t believe what Julian allows me to film.”

Viewers are sure to be thinking the same thing. There are scenes of Assange in the woods, acting paranoid when he hears the bark of a dog or some rustling nearby. He is seen in a car, fingers trembling while the U.K. Supreme Court decides his appeal against an extradition related to sexual assault accusations in Sweden. There is a riveting episode in a hotel room with his mother where Assange, his white hair dyed reddish-brown, is putting in contact lenses in an effort to change his appearance. And there is a — surreal may be the only way to describe it — interview Assange has with Lady Gaga in the Ecuadorian embassy in London, where he has sought asylum. Lady Gaga asks him what his favorite food is, and if he ever feels like crying. Assange’s responses are telling.

Poitras captures these and many other intimate moments with the same journalistic, fly-on-the-wall approach she took with “Citizenfour,” her Oscar-winning documentary about Edward Snowden. Assange is an equally fascinating subject, and his hubris is remarkable. Responding to charges of sexual assault in Sweden, he considers the ways the cases may play out, explaining why having two women accuse him is worse than having just one “bad woman” attack his character.

Assange clearly doesn’t mince words. An early scene depicts him warning then-Secretary of State Hillary Clinton’s people (read: covering his ass) that someone other than Wikileaks is going to release hacked, unredacted State Department documents. He informs them, “We don’t have a problem; you have a problem.” As the call is being made, Poitras focuses on Assange’s face. He blinks repeatedly, as if a nervous tic was trying to upset his poker face.

The most salient feature of “Risk” is how Poitras remains non-judgmental throughout. Through observation and interviews she presents Assange truly as he is (or, at least, how he presents himself to be). He talks about the perils of being known or a target, and the importance of anonymity, admitting, rightly or not, that his profile didn’t take off until the sex cases hit the news. Assange firmly states, “People with strong principles don’t survive for long,” possibly indicating the limited future he sees for himself as a whistleblower. However, to his credit, he has the courage of his convictions. Assange says he fights for the things he cares about, noting that, “Every day is disappearing.” He also claims he doesn’t believe in martyrs, but Assange does believe in risk, opportunity and finding a balance. Whether he has found the right balance is something for viewers to consider.

While many people see Assange as toxic, Poitras finds a supporter outside his extradition hearing. She asks him if he would support Assange should the Wikileaks founder be found guilty. The man acknowledges the severity of a sex crime, and would express despair if it was true, but he still supports Assange’s whistleblowing actions.

The moment presents one of the film’s many opportunities for critical thinking. There are also concerns expressed about working for a big, secretive institution, like the CIA or News Corp, and not agreeing with the institution’s value system. Such a mindset may be a way of justifying Wikileaks’ behavior, but they also force the viewer to confront what is in the best interest of society.

In that regard, Poitras features the case of Chelsea (née Bradley) Manning, who was convicted of aiding the enemy by providing documents to Wikileaks. This is one example of what Poitras refers to in “Risk” as the “prisoner’s dilemma” — is it better to stay silent or betray someone?

The film asks viewers to consider Assange’s words and actions as carefully as Assange does. In what is arguably the most potent and revealing exchange in “Risk,” Assange consults with a female lawyer about his sexual assault cases. She warns him about what to say and what not to say, but his comments to her speak for themselves.

Throughout the film Assange believes what he is doing is right. Wikileaks is proud never to reveal the sources of their information, much to the frustration of the media and others. But despite the noble intentions, are the Wikileaks folks going about their mission in the best way?

The film provides other examples of Wikileaks editors behaving with questionable judgment. Jacob Applebaum, one of the website’s contributors, is seen in Cairo asking if Egyptian internet provider TE Data collaborated with Hosni Mubarak, censoring websites and emails. His accusations are valid; he says he can prove what he claims. However, when Applebaum is later accused of (but not charged with) bullying, abuse and criminal sexual misconduct, it shines a different, darker light on him. The film repeatedly connects the dots between power and transgression.

“Risk” is, if you haven't already guessed, quite dense, and Poitras asks viewers to absorb a considerable amount of information in its 94 minutes. The film seems to expect viewers have some familiarity with the people and events presented, but it also fills in many gaps. The onslaught of information can feel like overkill at times, which may be why the bizarre, amusing Lady Gaga episode is included. The film also briefly, if cursorily, addresses the 2016 U.S. Election, and questions about Russian hackers. It is likely a consideration of timing why this particular story wasn’t developed further, but at least it shows how the issues surrounding Assange continue to be impactful.

One respite from the information overload is the filmmaker’s periodic voice-overs (“production journal diary entries,” as Poitras calls them). These segments enhance, rather than distract from all the information (and egos) tumbling off the screen. The device humanizes the filmmaker, getting inside her head as she processes the events taking place in front of her camera.

Laudably, Poitras candidly expresses her concerns in reporting Assange’s story. She wonders why he trusts her, and fears Assange might react badly or feel betrayed. She recounts being stopped by security while traveling (apparently she's now under the same cloud of suspicion as her subject). She describes being contacted by an anonymous source who may be trying to entrap her. It's hard not to share her fears and concerns or applaud her bravery.

The the end, she observes how much she's learned from Assange about secrecy, even if she doesn’t know what he is planning. She says, “This is not the film I thought I was making . . . contradictions have become the story.”

Assange may have the film’s final word, questioning whether “Risk” will ultimately prove a threat to his freedom. But it is the bold, vulnerable Poitras who becomes the film's hero.