WATCH: "How is this not a broken promise?" Tapper asks HHS Secretary Tom Price about cuts to Medicaid 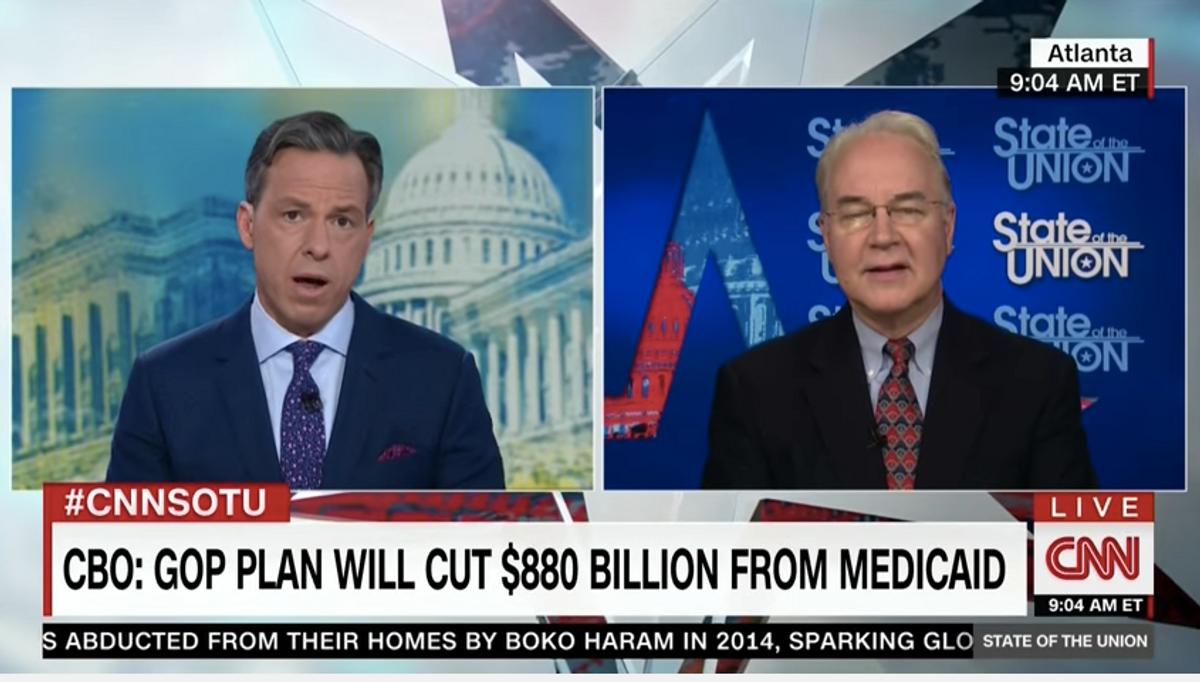 On Sunday, Health and Human Services Secretary Tom Price defended the new Republican health care bill insisting that there will not be cuts to the Medicaid program and that premiums for individuals with pre-existing conditions will not rise.

When asked about the multiple health groups that are opposed to the new legislation on NBC's "Meet the Press" Price responded by saying that he believes those groups are not "recognizing" that this is a "better way."

"Sometimes change can be disconcerting to folks. And that's why I would suggest that that list of groups that you had up earlier, say they now oppose it, the fact of the matter is, they're not focusing on the kinds of things that are going to improve the system," Price added.

Price was also featured in an interview on Sunday with Jake Tapper on CNN's "State of the Union" where he was pressed about President Trump's previous promise to not cut Medicaid. According to the most recent score from the Congressional Budget Office, the new health care bill will cut Medicaid by $880 billion over the next 10 years.

"How is this not a broken promise?" Tapper asked.

Price responded by saying that there is a "fundamental flaw" within the current Medicaid system. Later adding, "Remember that there are no cuts to the Medicaid program — they’re increases in spending. But what we’re doing is apportioning it in a way that allows the states greater flexibility to cover their Medicaid and care for their Medicaid population."

Tapper then asked if Price was "actually saying" that the cuts would not result in millions of Americans not receiving Medicaid. Price replied saying "Absolutely not."

"We believe strongly that the Medicaid population will be cared for in a better way under our program," he added.