"Catastrophe" gives TV a realistic view of alcoholism at last

The comedy gets dark as Rob starts to "slightly drink" again 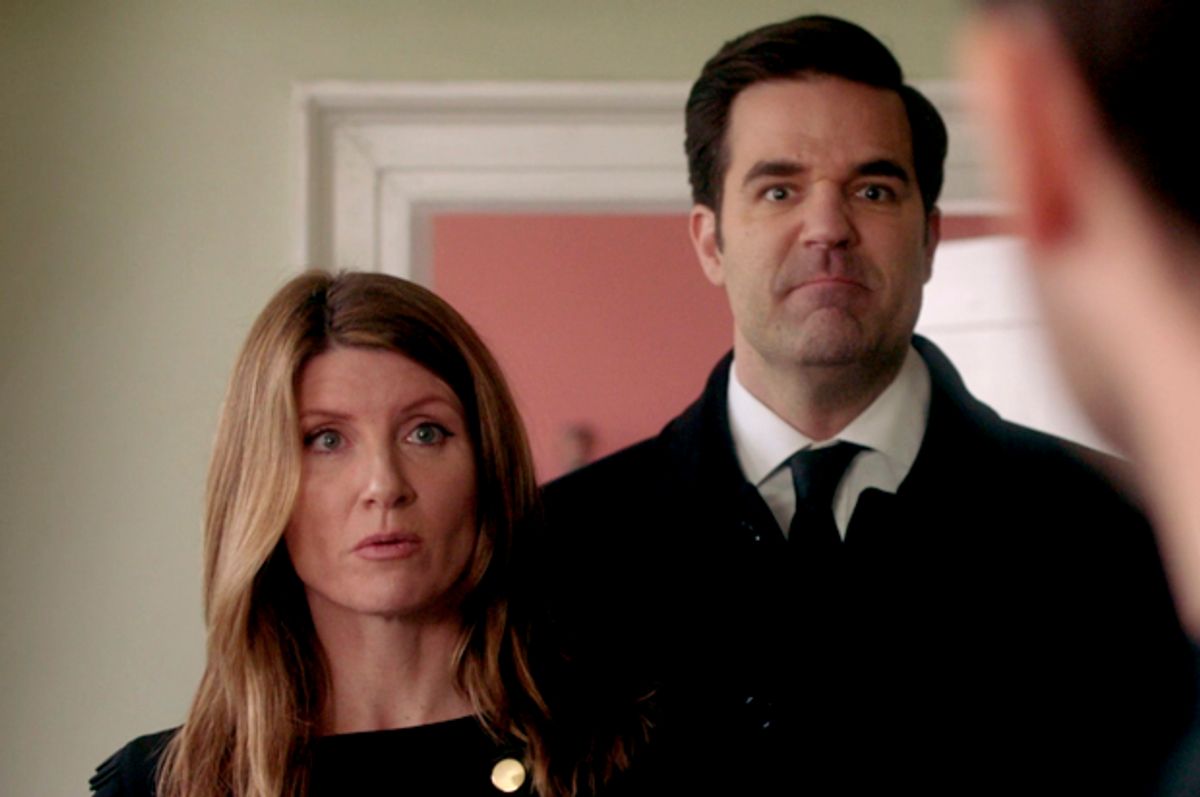 Warning: Spoilers for the full third season of "Catastrophe" are ahead.

From the beginning of "Catastrophe," Rob Norris (Rob Delaney) has been flirting with disaster. This season, it flirted back with a vengeance — in the form of an airplane-size bottle.

In the very first scene of the series, Rob is hunched at a crowded bar, surrounded by booze on either side. He strikes up small talk with a pretty stranger named Sharon (Sharon Horgan), and quickly offers to buy her a drink, explaining that it'll make him feel better about "being in line for just a Coke." He then tells her that he used to drink but stopped after he soiled himself at his sister's wedding. Naturally, after a line like that, the two embark on a torrid fling that leads to an unplanned pregnancy, one that ultimately results in marriage, two young children, a home and assorted career, family and friendship conflicts.

When "Catastrophe" debuted in the U.K. and here in the U.S. two years ago, the show's title seemed humorous. After all, the defining catastrophe of the first season is a no-strings-attached affair yielding offspring. Last season, however, the show took a darker turn as Rob and Sharon — and their extended circle — find themselves grappling more significant challenges. In that season's final episode, Sharon has possibly committed infidelity and Rob has emptied a hotel room's minibar.

Yet early in the third season, the biggest potential disaster the couple faces seems relatively minor. At lunch with his boss — during Rob's unpaid leave from his company — she orders a tea and he orders a cocktail. Whether she knows he's supposed to be sober is unclear, but her raised eyebrow is not. "How are the kids?" she asks, and he replies by draining his drink in one go. En route home, Rob comically covers himself in cheese and onion potato chips to conceal from his wife the aroma of alcohol. A few scenes later, he's now eating a hot dog rolled in lunch meat and shruggingly telling Sharon he's been at the movies. But has he?

By the next episode, it's clear that Rob's search for a new job isn't going well. He sits at one interview sweatily flubbing, through a series of lies, while the interviewer points out his missing shirt button. But it's at the next one that things really start to crash down, as the human resources person tells him, "What is concerning me, right now, is that you smell of alcohol." Rob swiftly insists that he met a friend for luck and "had a beer." But suddenly it's very clear to the viewer: He's drunk. Again. He's been getting drunk a lot lately. His steady weight gain hasn't been a fluke. A short time later, Sharon is hugging him and noting, "You stink of cheese and onion crisps. It's overpowering."

As the season goes on, Rob's tailspin from sobriety becomes even more apparent. When he conveniently finds a miniature bottle of vodka in a pants' pocket while doing the laundry, he looks at it dejectedly, as if saddened by the inevitability about what comes next — and downs it. His friend Chris comes by shortly after to "bully him" into being his son's legal guardian, but observes, "I'm pretty sure I can smell booze on you. Do you not drink?" Rob counters, "I have the odd drink . . . now . . . the odd private drink. I didn't drink, and now I slightly drink."

Chris, who's been as volatile and badly behaved as any other character on the show throughout, wisely backs off his insistence about the guardianship and tells Rob, "For a good few years, you told me you shouldn't drink, and I believed you. And now you're drinking." And though he promises to not tell Sharon, Chris urges Rob to because "someone will." Rob then drunkenly splats on the sidewalk.

By the season's climax, Rob's justifications for his drinking have escalated right along with the drinking itself. Chris, checking to make sure Rob hasn't gone "full Winehouse," reminds him, "When somebody tells you something about themselves, I learned it's a good idea to listen." But Rob insists, "There's a spectrum we're all on." He then confesses that he has been drinking to his mother (the perfect, heartbreaking Carrie Fisher in her final role). "Nothing terrible has happened," he tells her. "But I feel like shit. I know it would be a really bad thing to drink right now, but I want to. A lot."

"You can't drink!" she replies, exasperated. "You never could drink. Why is going to be different now?" But drink, of course, he does, until Sharon does indeed find out about it in a particularly awful way — a car accident.

If the fictional Rob's struggle with sobriety has a chilling air of authenticity to it, that's no doubt because the real Rob Delaney is a recovering alcoholic. Writing in the Guardian in 2013, he recalled his drinking days of his 20s and that "my girlfriend at the time was bummed out by my drinking but not horrified. She never really saw it all, since I'd try to keep it together around her." He was, at the time, nonchalantly sleeping on plastic sheets because he wet the bed with such regularity. It wasn't until a car crash — actually two car crashes, back-to-back — that he went to rehab and sobered up.

"Catastrophe" has from the beginning quite brilliantly communicated that whether we drink or not, we live in a drinking world. We pour wine at dinner parties. We clink glasses at work events. We meet our buddies down at the pub. The relapse storyline may seem puzzling to anyone unfamiliar with what alcoholism can look like up close, especially if you're more accustomed to television's historically "very special episode" approach to alcohol abuse. In many scenes, Rob is behaving quite normally — doing school drop-off, squabbling with his wife, socializing with his friends. Being an alcoholic is a full-time gig, but drinking usually isn't. As Tyrion Lannister once put it, "It’s not easy being drunk all the time. Everyone would do it if it were easy." And there isn't a single cataclysmic event that makes Rob start drinking again. He picks it up because he's an alcoholic. If you know people in recovery, you know that's the simple, humbling reality that they work on every single day.

If Sharon — the person closest to Rob in the world — doesn't notice what an HR guy can sniff out in a minute, it's not because she's clueless. It's because she doesn't expect Rob to be drunk. She trusts him to not be. If you ever didn't realize someone was an alcoholic until that person told you so, it's likely because he or she was doing a great job of not letting you know. Sharon, meanwhile, gets to knock back a few and sometimes even get drunk without having to sneak shots in the laundry room. Because she's not an alcoholic.

That's the nature of the condition. Alcoholism is never so much about how much you drink as how you drink. That's why to anyone but the alcoholic, it can be difficult to detect. And why the character Rob, that hulking 6-foot 3-inch man, was already "full Winehouse" when he took that first sip from that tiny, tiny bottle.