Who will replace James Comey? The speculation is flying on the new FBI director

The president has a wide range of options for the position of FBI Director, and a few names are being floated in DC 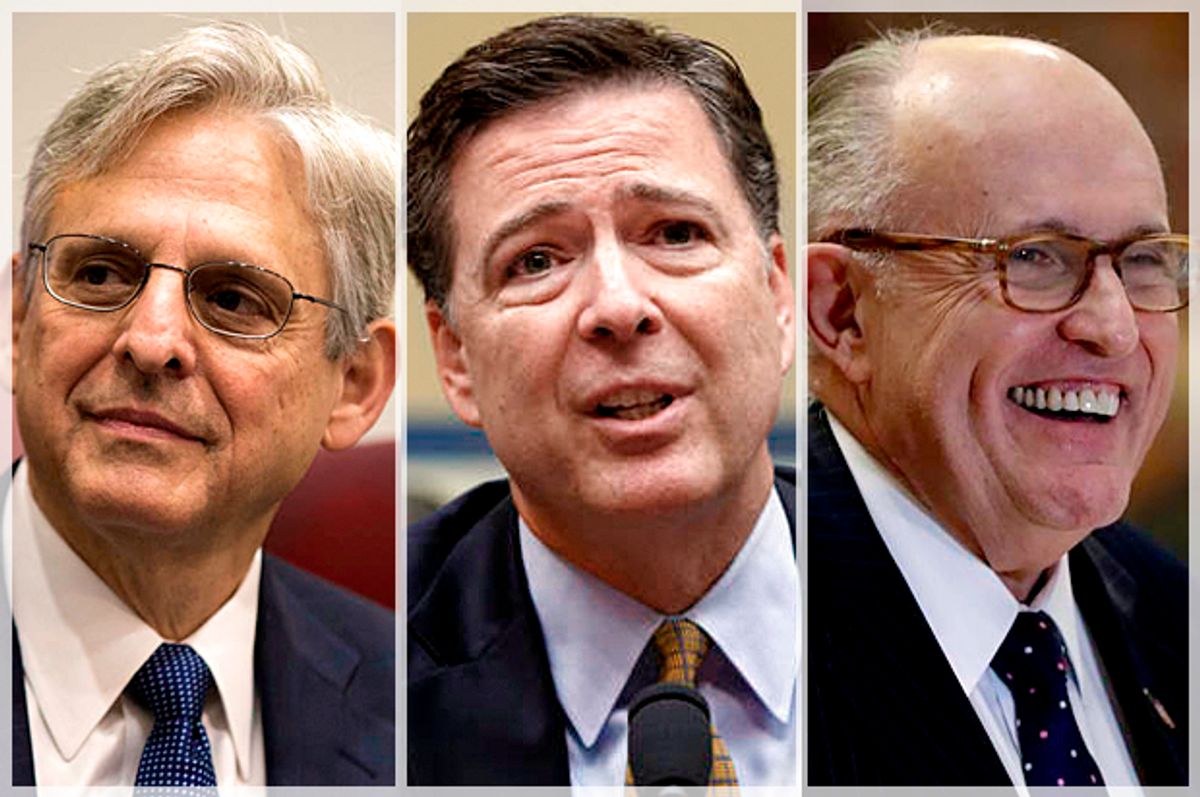 The next move in President Donald Trump's war on the FBI will be selecting a successor for James Comey, the man who was just deposed as that organization's director. If the names being publicly aired for consideration are any indication, Trump will have a wide range of options — from individuals who would almost certainly receive bipartisan support to high profile Trump cronies and right-wing firebrands.

The hot name being floated — by Republican Sen. Mike Lee — is Merrick Garland. He's the chief judge on the U.S. Court of Appeals for the District of Columbia — the most important position on one of the most important courts in the entire country — and has a lifetime appointment. Of course, there's one big flaw to the "Garland for FBI" idea, which was pointed out by former Barack Obama staffer Jon Favreau:

But, when it comes to safe, bipartisan choices, Trump's list includes Andrew McCabe, who is serving as the acting FBI Director in lieu of a permanent replacement. The advantages with McCabe are that he is undoubtedly qualified — having worked at the bureau for more than twenty years with a wide range of expertise — and would likely meet with little opposition. The drawback, however, is that he was very close to Comey and participated in both the Russia investigations and the Hillary Clinton email investigations, which Trump may hold against him.

Other potentially bipartisan choices listed by CNN include Ray Kelly, the former New York City Police Department commissioner who served in administration roles under President Bill Clinton, and John Pistole, who served as deputy director of the FBI under President George W. Bush and administrator of the Transportation Security Administration under President Barack Obama. Axios also reports that Republican Rep. Mike Rogers of Michigan is under consideration; Rogers currently serves as House Intelligence Committee Chairman and, like Kelly, has been considered for FBI Director in the past. The site also mentions former F.B.I. general counsel Ken Wainstein, whose resume stretches from the bureau to the Justice Department to serving as counsel to former Director of National Intelligence James Clapper.

If Trump decides to go in the loyalist/uber-right wing direction, the three names most likely to come up are ones familiar to any casual follower of the American political scene. Former New York City Mayor Rudy Giuliani is perhaps the most heavily promoted within this category, due not only to his extensive background in law enforcement but also his unwavering loyalty to Trump. Adding fuel to the fire of rumors surrounding Giuliani is the fact that he was spotted at the Trump International Hotel in Washington mere hours after Comey was fired. Although he denied being under consideration for the FBI Director job, he admitted that he was scheduled for a White House meeting (but conveniently declined to say whether it was with Trump).

If Trump passes over Giuliani but still opts for a red meat alternative, his next option would be New Jersey Gov. Chris Christie, who has also been staunchly loyal to Trump and has considerable legal background. The downside with Christie, however, is that he is still fighting off the stench of his association with the Bridgegate scandal, and is well-known to be on poor terms with Trump's son-in-law Jared Kushner due to his prosecution of Kushner's father. Trump may also consider Republican Rep. Trey Gowdy of South Carolina, who immediately became a favorite of the right-wing blogosphere after Comey's firing was announced due to his role leading the committee that investigated Hillary Clinton after the Benghazi terrorist attacks.