10 films about mothers: Almost all of them are evil, domineering, shameful and embarrassing

The 10 most rotten, misguided, unlovable, hopeless or just well-intentioned moms Hollywood ever produced 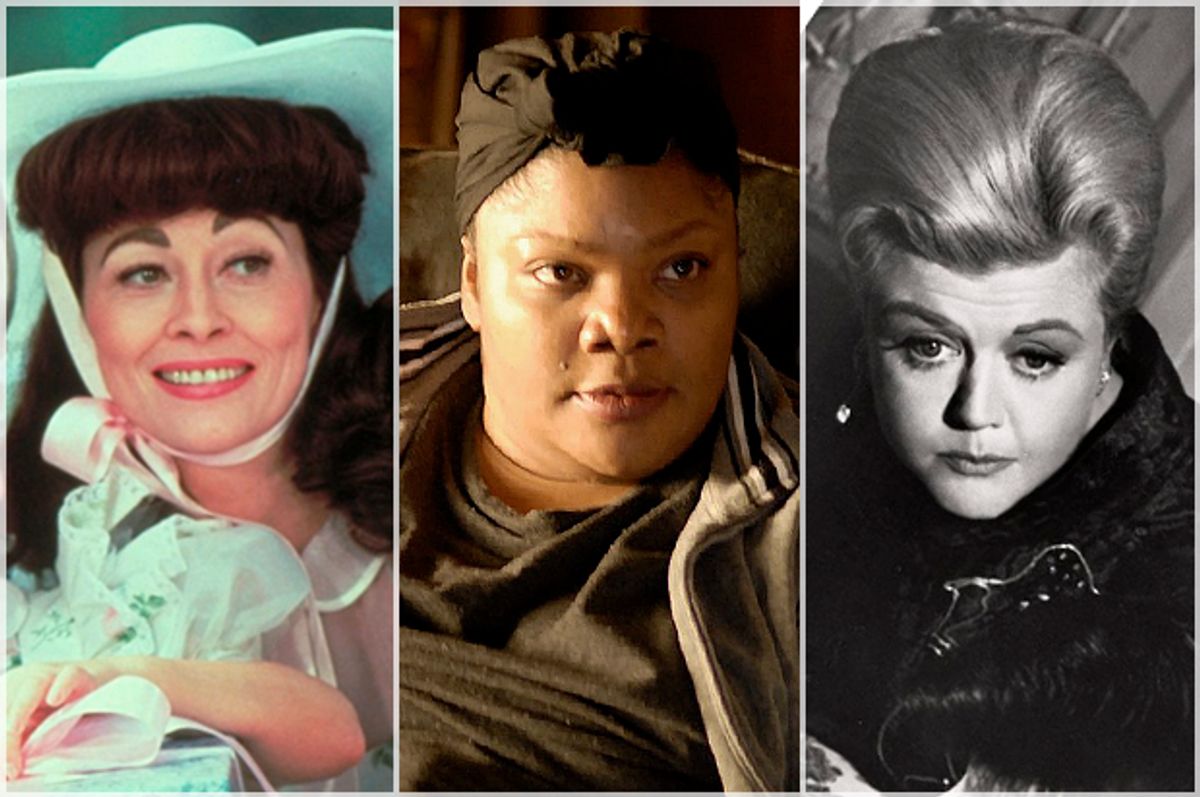 Mother’s Day is the time to honor Mom. For all the love and attention (or even money) she gave you, or when she helped you out of a jam, or let you off the hook when you did something really bad.

But not all moms are nice. In cinema, there is a long history of mothers who smother, dominate, abuse, and embarrass -- and a few who sacrifice. It may be counterintuitive to recount mostly “bad mother” movies for Mother’s Day, but don’t these screen mommas make you appreciate your own mom more?

Here are 10 films to watch with (or without) Mom to celebrate Mother’s Day.

Is there nothing better than a mother’s love? But sometimes, Mommy can love too much. “Mommie Dearest” is the unintentionally hilarious camp classic, based on Christina Crawford’s tell-all memoir. Faye Dunaway gives an incomparable, unhinged performance as Joan Crawford, a celebrity mother who simply wants her daughter’s love and respect. And while she’s willing to sacrifice everything for her daughter — just like Crawford did playing Mildred Pierce — Christina really doesn’t appreciate it. “You love to make me hit you,” Joan barks, smacking Christina hard across the face, twice.

Sixteen year-old Clarice Precious Jones (Gabourey Sidibe, Oscar-nominated for her film debut) is pregnant — by her father — with her second child. She is also abused by her mother, Mary (Oscar-winner Mo’Nique), who knocks her daughter out with a frying pan. The physical abuse is coupled with mental cruelty; Mary tells her daughter she’s “a dumb bitch,” and that she should have aborted her. Mary also kicked Precious in the head while her daughter was giving birth to her first child, and is seen throwing a TV at her daughter, who is running down the stairs. Mary eventually confesses why she hates Precious so much, showing that evil mothers have their reasons — not that they are justified! Mo’Nique is indelible as the monstrous mommy, but “Precious” is life-affirming because of Sidibe’s ingratiating performance. We are never not on her side, whether Precious is stealing a bucket of chicken, getting an education in an alternative school, or indulging in flights of fantasy as a way of overcoming her horrible home life.

In this Alfred Hitchcock classic, adapted from Robert Bloch’s novel, Norman Bates (Anthony Perkins) is shocked that his mother has just killed Marion Crane (Janet Leigh), a motel guest, in the film’s famous shower scene. Well, “we all go a little mad sometimes,” as Norman observed to Marion shortly before her death. Mother Bates seems like a nice old lady, who sits in the window of the house overlooking the motel. “She’s an invalid,” Norman tells private eye Milton Arbogast (Martin Balsam), who investigates Marion’s disappearance and is determined to meet Mrs. Bates. Even Sam Loomis (John Gavin) refers to Norman’s mother as “a sick old lady unable or unwilling to answer the door.” But then the truth about this domineering old lady is revealed. And like Lila Crane (Vera Miles), who does learn the truth, it might haunt you forever. Three sequels, a shot-by-shot remake, and a TV series followed, but Hitchcock’s film is the mother of them all.

4. “The Manchurian Candidate” One of the nastiest screen mothers ever is Mrs. Eleanor Iselin (Oscar-nominated Angela Lansbury) in the landmark 1962 thriller “The Manchurian Candidate.” She is so conniving, Eleanor manipulates her husband Senator John Yerkes Iselin (James Gregory) to cause political disruption. Actually, she has a much more nefarious plan “to make martial law seem like anarchy,” and uses her son Raymond Shaw (Laurence Harvey) — who has been brainwashed to be an assassin — to achieve her goals. Her incestuous kiss is just another symbol of her bad behavior. Based on Richard Condon’s novel, “The Manchurian Candidate” is still timely today. The late Jonathan Demme’s 2004 remake, with Meryl Streep, is not nearly as potent.

Brian DePalma’s celebrated horror film, an adaptation of Stephen King’s novel, features one of the most memorable screen moms of all time, Margaret White (Piper Laurie, in an Oscar-nominated turn). Carrie (Sissy Spacek, also Oscar-nominated) is a teenager with telekinesis, who is teased at school when she gets her first menstrual period. Her extremely religious mother hits and punishes her for this, locking her in a closet. When Carrie is invited to the prom, her mother expresses her concern that they will all laugh at her. Margaret’s intensity culminates in a confession that may explain her fanatical behavior — the film certainly acts as a morality play — and prompts Carrie to exact a violent (and perhaps justified) revenge. A flop as a musical, the film was remade in 2013 with Julianne Moore as Margaret White.

Barbara Stanwyck’s working-class title character is so devoted to her daughter Laurel (Anne Shirley) that she will do anything for her. But Stella embarrasses Laurel, and regrets that she can’t give her daughter what she wants. Stella ultimately makes a heartbreaking (and tear-jerking) decision. “Stella Dallas” is a classic, not just for its soapy qualities, but because Stanwyck (Oscar-nominated for her role) elicits so much sympathy as the brassy, well-meaning mom. Her garish outfits are terrific, and watching her doing her best, which isn’t good enough, may just make you want to hug your mother. Avoid the mediocre 1990 Bette Midler remake.

This sudsy mama-drama, adapted from Larry McMurtry’s book, has Emma (Debra Winger) grappling with her overbearing mother Aurora (Shirley MacLaine) over several decades. The strained relationship between mother and daughter is complicated because these hardheaded women love each other, but can’t express it; they end up fighting instead. They also go about finding love the hard way, having difficulties with men, something that ultimately brings them closer together until the film’s third-act twist. The feisty performances by MacLaine (who won an Oscar) and Winger (nominated, but lost to MacLaine) are superb, and one of the reasons this emotionally manipulative film works as well as it does. Cynics can stay away, but everyone else should keep hankies handy. “The Evening Star,” the 1996 sequel, continued Aurora’s story, but with less success.

The late Mary Tyler Moore challenged her image and scored her only Oscar nomination as Beth Jarrett, the callous, grieving mother in Robert Redford’s beloved film adaptation of Judith Guest’s novel. After the accidental death of her oldest son, Buck, Beth is grappling with loss. Her youngest son, Conrad (Oscar-winner Timothy Hutton), is experiencing survivor’s guilt; he has exhibited suicidal tendencies because he feels responsible for the accident. Beth gives him no affection or reason to feel otherwise. Her cold-heartedness stems from her need to keep up appearances, maintain normality, and become “ordinary people” again. Family tensions continue through Christmas, and eventually boil over in a heated exchange that changes the family dynamic forever. The mother-son drama is engaging, and a scene where Beth breaks a plate is a memorable, symbolic moment about how things will never be the same again.

Helene McCready (Amy Ryan, in an Oscar-nominated turn) is the neglectful, drug addict/drug-mule mother whose daughter Amanda has been kidnapped. As is later revealed, Helene’s poor parenting resulted in a fake kidnapping scheme to get money together to save Amanda. Ryan is fantastic as the foul-mouthed mother, especially when the police interrogate her. She excels as a tough yet vulnerable woman who “knows she fucked up,” but desperately wants her daughter back. That said, she has no clue how to care for the child, since she often puts Amanda in jeopardy when she does have her in her care. Helene begs private investigator Patrick Kenzie (Casey Affleck) to promise to save her daughter, and he gets in over his head in the process. In the case of “Gone Baby Gone,” mother doesn’t always know best.

In this classic film noir, adapted from James M. Cain’s novel, Mildred Pierce (Joan Crawford, in an Oscar-winning performance) is the selfless mother of Veda (Ann Blyth), one of the most despicable daughters to ever grace the screen. While the hardworking, divorced Mildred spoils her children, Veda is ashamed of her mother’s “common” behavior — full of contempt that Mildred is a waitress. As Mildred becomes a successful restaurateur, Veda remains ungrateful, scheming to get what she wants from various men, including mom’s boyfriend Monte (Zachary Scott). When Monte is shot (in the opening scene), the police interrogate Mildred about his death, which prompts her to make what may be the ultimate sacrifice for her daughter. Mildred isn’t a bad mom because of her actions, but she did create a selfish, hateful child.