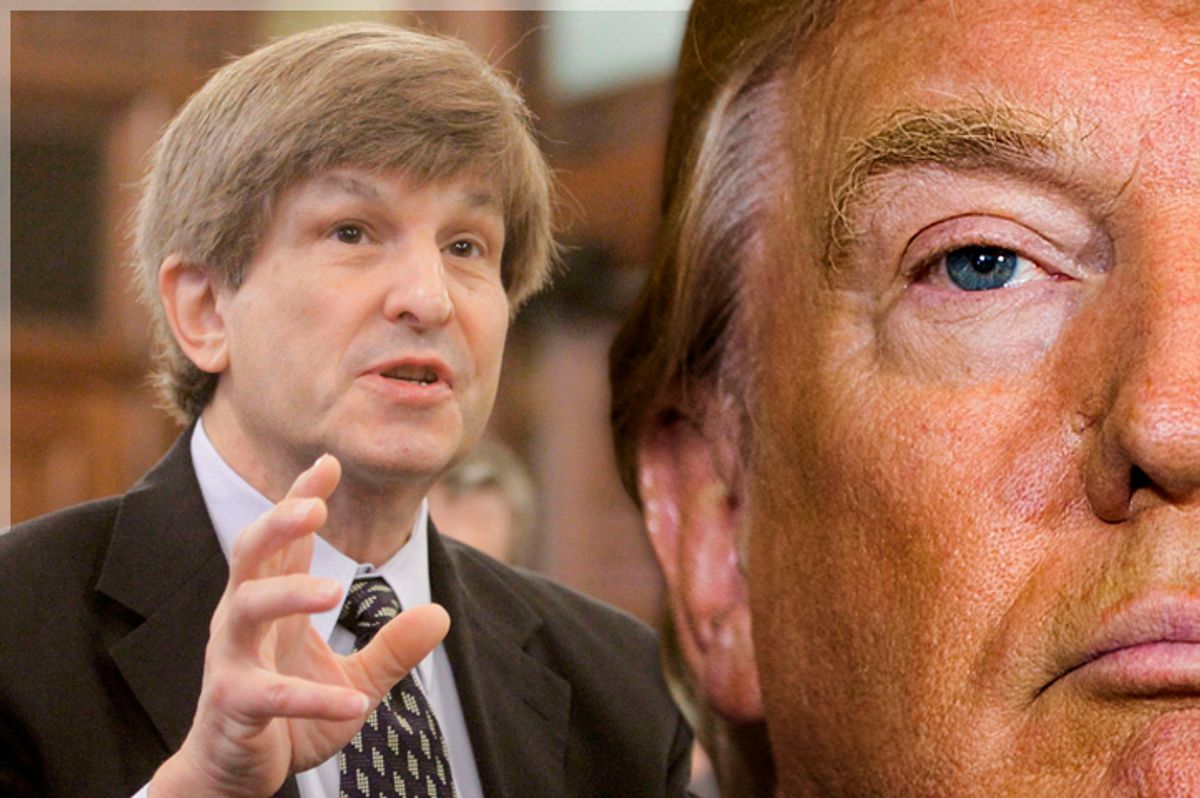 It is debatable whether President Donald Trump should actually be impeached for high crimes and misdemeanors. But at this point it is no longer debatable that there should be an impeachment investigation.

As Allan J. Lichtman of American University pointed out in an interview with Salon on Tuesday, "Impeachment should only proceed when it threatens the society." There are three ways, Lichtman argued in our conversation — and contended in his new book "The Case for Impeachment" — in which Trump's presidency poses a clear threat to the lawfulness of our government:

1. The numerous conflicts of interest that Trump has refused to address (his dozens of trademarks in China being among many examples).

3. Trump's firing of FBI Director James Comey, which would constitute obstruction of justice if it happened -- as Trump himself has suggested -- because Comey was leading the investigation into the alleged collusion with Russia.

Calling for an impeachment investigation does not require us to prove these charges rise to the level of criminality. It only compels us to prove that there is sound reason to believe they could be true — and unless you are a mindless partisan, that is clearly the case now.

Lichtman himself is something of a celebrity due to his vaunted predictive powers. In 1981 he developed a set of 13 true-or-false questions that assess political, economic, geopolitical and social conditions to determine whether the incumbent party will win the presidential election or not. He has used that model to accurately forecast the outcome of every presidential contest since 1984, albeit somewhat complicated in the years when there was a popular/electoral college split.

As Lichtman pointed out in our interview, the advantage of an impeachment investigation is that it would place the future of an inquiry completely out of Trump's hands. A special prosecutor or special counsel like Robert Mueller, after all, could be fired at whim by the president. (Consider the case of Archibald Cox, the special prosecutor fired by Richard Nixon in the "Saturday Night Massacre" of 1973.)

The House Judiciary Committee, on the other hand, is part of the legislative branch, which puts it beyond Trump's reach. If the committee decides by a majority vote to recommend articles of impeachment for the entire House of Representatives to consider, it would then be up to America's elected representatives to decide whether Trump should join Andrew Johnson and Bill Clinton on the ignominious list of American presidents who have been impeached.

Should the House vote to do so, the president's fate would then be in the hands of the Senate.

Realistically speaking, it is extremely unlikely that a House of Representatives controlled by a Republican majority would ever vote to impeach Trump, or that a Republican-controlled Senate would then vote to remove him from office (barring an unforeseen smoking gun worse than anything we have seen so far, of course).

For a president to be removed from office, two-thirds of the Senate must vote to convict him or her on the impeachment charges brought by the House. So in the current Senate, even if every single Democrat (and both independents) voted to remove Trump from office, 19 Republicans would have to join them. Yet even with all of the untoward revelations that have come out about Trump to date, only five Republican senators have gone so far as to support the appointment of a special prosecutor.

To be fair, it's not clear that that the Democrats can be entirely trusted on this issue either. Let's say that Democrats manage to retake control of the Senate and House in the 2018 midterm elections — a long shot, but not outside the realm of possibility. That opens the door to impeachment in 2019, right? Well, yeah, but if Trump were to be forcibly removed from office before the 2020 presidential election, the Democratic candidate that fall would presumably face off against President Mike Pence, who could very well be free of Trump's political baggage.

Pence could still lose such a hypothetical election, of course, but he could also wind up benefiting from the public goodwill that often props up new presidents when they take office under emergency conditions, as was the case for Lyndon B. Johnson and Gerald Ford. So Democrats may have a political incentive to keep on harping on Trump's scandals, but they may have less incentive to drive him from office, even if it becomes clear he has broken the law.

It's lamentable that partisanship has reached a point in this country where the needs of justice can be ignored due to petty self-interest. And yet, even under this dark cloud, there is a silver lining. It is difficult to conceive of a situation whereby the Republicans would move against one of their own in such a historic fashion. But if they did so, the mere fact that leading Republicans had finally decided that Trump's behavior was unacceptable would demonstrate the necessity of removing him from office.

Similarly, if Democrats were willing to risk the possibility that Pence could serve as much as 10 years in the White House after Trump's forced removal (under this scenario, the 22nd Amendment would allow Pence to seek two terms of his own), that would be powerful evidence that they had sacrificed their own political self-interests so as to protect the integrity of the greater political system.

Let us not forget that a recent poll found 48 percent of Americans would support an impeachment of President Trump. If appeals to patriotism aren't enough to sway Republicans and Democrats in Congress, there is a practical political case that could do so as well. As Lichtman noted, public opinion was crucial in turning the Republican Party against Richard Nixon in 1974.

"Impeachment," he said, "will only really happen if the people want it."

There is one final and absolutely critical point to be made here: The case for impeaching Donald Trump exists independent of any criticisms of his policies. As I noted during the interview with Lichtman, the impeachment of Andrew Johnson was clearly motivated by partisan and policy disagreements rather than any serious criminal offenses on his part, a fact that makes that event a permanent blot on the legacies of the politicians responsible for it rather than a mark of merit.

"I make it clear that Trump should not be impeached because he's unconventional, because you don't like his style or because you disagree with his policies," Lichtman explained. "I disagree with a lot of policies of presidents, but I haven't written a book before on the case for impeachment. I quote the great expositor of the Constitution, Alexander Hamilton in 'The Case for Impeachment.' It points out, impeachment should only proceed when there is such a severe abuse of power by the president that it threatens the society itself."

This is the situation in which we find ourselves. One can only hope that the Republican and Democratic parties will rise to the historical moment, lest they be proved unworthy of it.