Are Republicans starting to turn on Donald Trump? The answer is partway between "no" and "kinda"

Bob Corker laments the "downward spiral"; Marco Rubio muses "it is what it is." But actual independence is lacking 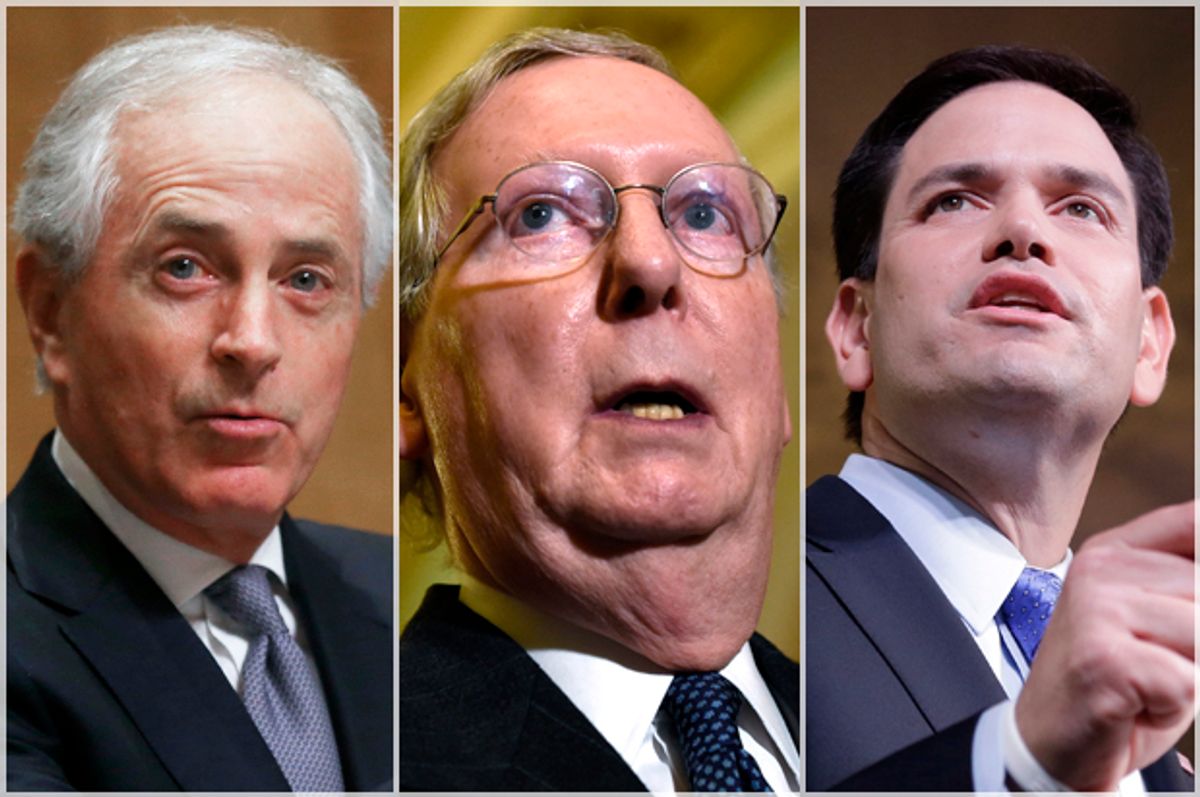 Leave it to Marco Rubio, of all people, to find a Zen moment in the chaos surrounding Donald Trump’s latest blunder. Asked about reports that the president revealed classified information to Russia’s ambassador and foreign minister during an Oval Office meeting last week, the Florida senator said that while the obvious inability of the president of the United States to be trusted with the nation’s secrets is “less than ideal, it is what it is.”

Who would have ever pegged Rubio as a She Keeps Bees fan?

Rubio’s colleagues blustered a bit more, but all the sound and fury added up to very little. Sen. John McCain called it “troubling.” Sen. Jeff Flake of Arizona — who is up for re-election next year in a state turning purple — lamented the lack of a “drama-free week” from the White House but added that we’ll all just “have to get used to it.” Sen. Bob Corker of Tennessee griped that the White House is in a “downward spiral” and “needs to come to grips” with the situation. Senate Majority Leader Mitch McConnell all but shrugged. House Speaker Paul Ryan seemed interested for about a minute before disappearing again, presumably to resume planning the destruction of Medicare.

Four months into his presidency, Trump demonstrates on a daily basis that some combination of narcissism, neediness, laziness and a brain clogged with grease from KFC renders him unfit for the office he holds. There is a pattern that has become all too familiar. Some White House transgression surfaces, congressional Republicans pronounce that their brows properly furrowed with concern, the media engages in a round of finger wagging, and the public wonders if this will be the crisis that brings down Trump. Then a day or two later, some new crisis emerges and the whole process repeats all over again.

But for those engaged in the left’s favorite parlor game — What Will It Take for Republicans to Impeach Donald Trump? — parsing the GOP reaction for movement in that direction must be as dispiriting as ever. Nothing, it seems, will cause congressional Republicans to break ranks.

(For the record, we’re only at step one of this pattern with regard to the newest scandal that broke late Tuesday afternoon — Jim Comey's already-famous "memos" — though I’m betting we will reach step two soon enough.)

There have been some rumblings that a few Republican legislators, worn out from the daily White House chaos that also engulfs Capitol Hill, are seeking distance from Trump. A few Democrats have said that their GOP colleagues privately acknowledge Trump’s shortcomings and speculate that he won’t finish his term in office. They whisper that this level of incompetence might have worked for the president when he was running a real estate company but is unsustainable for the country. It does too much damage to the public psyche, it slows down the congressional GOP’s agenda, and the loss of America’s status among our allies is already incalculable.

And then, after all the whispering, nothing. Stray comments here and there from various senators and representatives are the equivalent of dumping a boiler to keep the pressure from building up until it explodes.

Since the Republicans could get every policy they want under President Mike Pence, who would have the added advantage of not being an insane clown with an itchy Twitter finger and a temper with a yield approaching that of a small nuclear warhead, there is really only one explanation for their continued support of Trump. The president remains immensely popular with the Republican base, and has an approval rating among those voters hovering at about 84 percent. Turning on him now would be a sure way for Republicans to put themselves on the unemployment lines. If anything, the base will likely demand that the congressional GOP push harder to enact Trump’s agenda as the price for their votes next year. In deep-red districts, that is a much likelier scenario than a successful challenge by a Democrat backed by a bunch of liberal interest groups.

In short, Republicans are sticking with Trump because they think it's the only way to save their jobs. They may genuinely believe that public service means delivering tax cuts and destroying the social safety net that the nihilists and Ayn Rand fanboys among them (but I repeat myself) have ached to shred for years. But the cost of doing so means allowing a small minority of the electorate to essentially hold the rest of us hostage.

This is no way to run a country. But it is one we are stuck with until Trump’s daily follies reach critical mass. Based on the GOP reaction to Monday’s news (and even Tuesday's!), we are still a long way away from that point.