The "Jimmy Kimmel Live" host noted that there are two types of news: Fox News and fake news 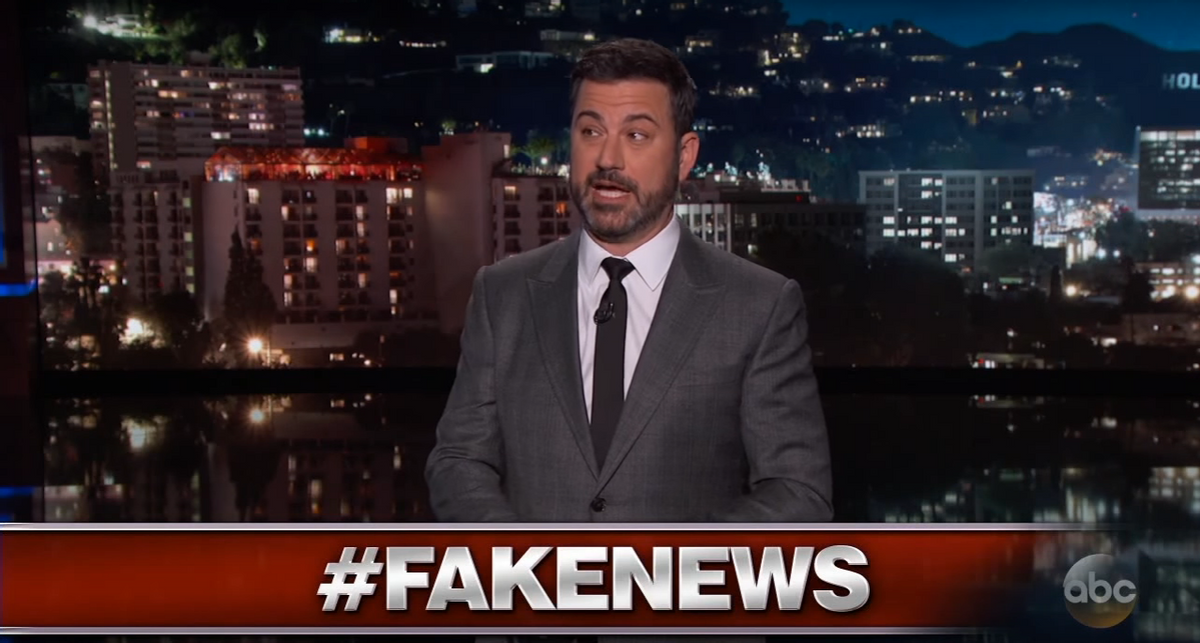 The cable news outlets have been working overtime lately in a desperate attempt to keep up with the bombshell scandals rocking the Trump White House. President Donald Trump, as of result, cannot stop complaining about all the negative coverage he has received.

So the writers and host of "Jimmy Kimmel Live" devised a handy guide to cipher through legitimate news and the so-called fake news flooding America's media landscape.

On Wednesday, Jimmy Kimmel showed his audience some clips from CNN and Fox News to juxtapose how the outlets were covering the president.

"This morning on 'Fox and Friends' they did everything possible to put a positive spin on what many believe was an obstruction of justice," Kimmel said before playing a clip showing the three co-hosts of "agreeing that the president did not obstruct justice by asking former FBI Director James Comey to drop the probe into Gen. Mike Flynn — because Trump only said that he "hoped" that the investigation would go away.

"Right. He said 'I hope.' That's not illegal if you say, 'hope,'" Kimmel responded sarcastically. "When Obama said 'hope' nobody impeached him. He put it on his poster."

"Those three on 'Fox and Friends,' Trump could shoot one of them in the heart live on air and the surviving two would still defend Donald Trump," Kimmel joked before introducing his new guide to fake news.

The comedian said that "it's getting increasingly difficult to tell what is true and what isn't" so he offered this handy guide to "tell the difference between the two types of news out there."

Kimmel then showed a clip of CNN's Wolf Blitzer breaking news on Comey's memo, which supposedly claims that Trump asked him to stop the investigation.

Kimmel then showed a clip from a "Fox and Friends" segment in which high school students visit Trump in the Oval Office.

"Alright, that is Fox News," Kimmel said. "There are three ways to telling it is Fox News. No. 1, it is nice to the president. No. 2, it is positive. And, No. 3, it has nothing to do with anything going on with the world."