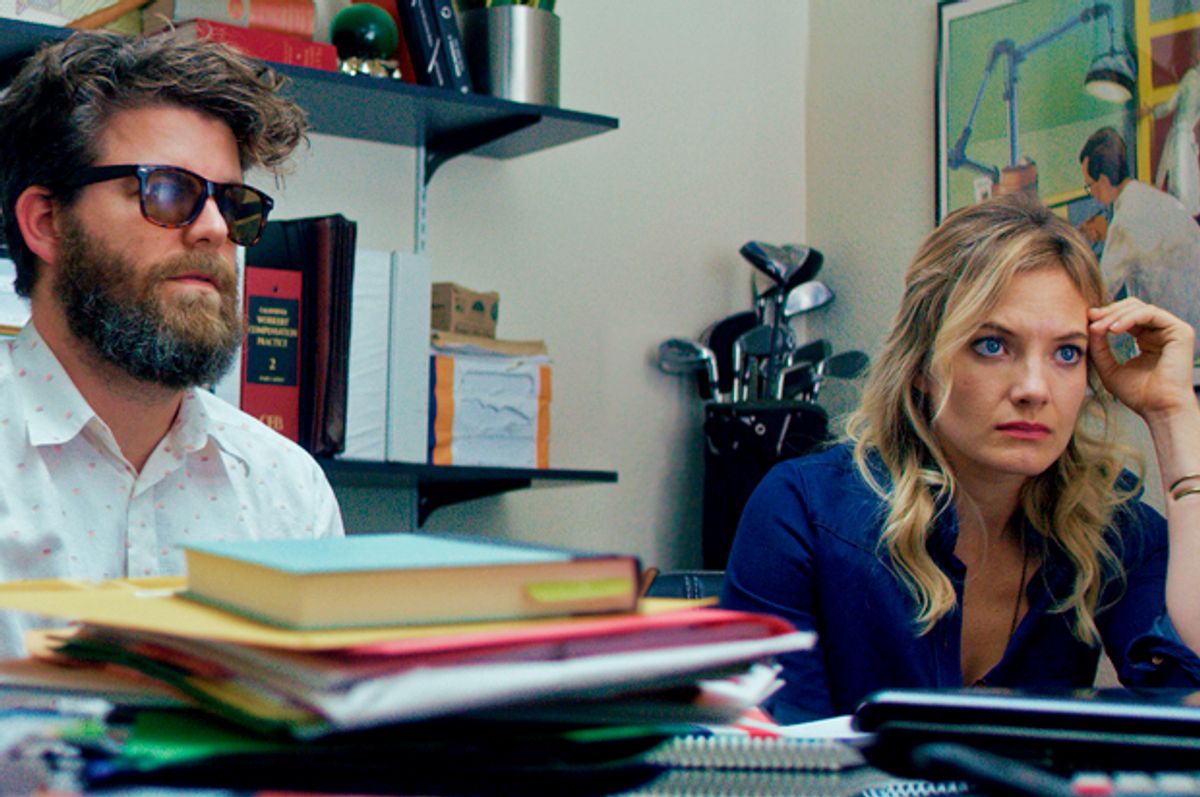 “Dr. Brinks & Dr. Brinks,” which had its world premiere at the Maryland Film Festival, depicts the darkly funny situations that result when the parents of two siblings die simultaneously. The Brinkses — the title characters — are volunteers for Doctors Without Borders and “saints” to the villages of children whom they have taught to ride a bike and providers of aid to around the world.

As parents, though, they're mostly neglectful. Their children, Michelle (Kristin Slaysman) and Marcus (Scott Rodgers) have grown into adults without boundaries.

When their parents’ single-engine Cessna crashes off Sri Lanka, the Brinks children are suddenly orphaned. “Dr. Brinks & Dr. Brinks” pivots its comedy on how the estranged siblings, who haven't seen each other in years, manage their grief. “I'm still waiting for it to hit me,” one observes. “What if it doesn't?” is the response (and one of the film’s funnier lines).

Marcus, who writes music and teaches piano, lives with his wife Alex (a terrific Ashley Spillers), and they share a cozy domesticity. They eat the leftovers from the funeral spread, play cards using a deck featuring topless models and seem relatively stable. But when Michelle enters their home, her toxic behavior stirs up trouble and all hell breaks loose.

Michelle and Marcus fight verbally over the family home (where Marcus and Alex now live) as the estate claims the deed still belongs to their parents and was willed to both of them. They also fight physically over unpacking Michelle’s suitcase, suggesting long-buried issues between them. As things between the siblings intensify, Alex observes, “I'm learning a lot about the Brinkses.”

“Dr. Brinks & Dr. Brinks” fails, however, to fully illuminate its characters. We never know what Michelle or Marcus were like before their parents died. Has Marcus always been relatively functional? Has Michelle been a hot mess all her life? The brief glimpse of her facedown in bed when Marcus first calls to share the news of their parents' death doesn’t reveal much.

When Michelle copes with her grief by seducing Alex's father, Bill (Robert Longstreet), it's hard to gauge if this is typical behavior for her. Unfortunately, the filmmakers don’t clearly introduce Bill as Alex’s father; this may be deliberate to create a shock or surprise when his relationship is revealed, but it dilutes the danger of Michelle’s reckless behavior.

Yes, there's humor in watching these self-centered siblings behave badly: Marcus begs Alex, wearing a green facial mask, for pity sex; Michelle awkwardly directs a guy on how to pleasure her in the front seat of her car. But the way grief hits the siblings slowly and unexpectedly is the true strength of this film. When Michelle begins crying while tied up in S&M bondage gear, it's a surprising moment of real emotion.

We don’t get much of a sense of why Marcus and Michelle aren't expressing more emotion. (Given how much they say they hated Mom and Dad, their parents’ deaths should have come as some kind of relief.) If the irony is that the siblings are unexpectedly bereft, it feels flimsy. The reveal of family skeletons in a subplot barely explains the tensions between the siblings and their parents, but it hardly scratches the surface of the underlying tensions between the Brinkses. It might have been wise to explore this relationship more.

Instead the film chronicles Marcus’ repeated comedic visits to a doctor for a series of nonexisting medical problems, which suggests, amusingly, that like the cobbler’s children who have no shoes, the children of doctors have hypochondria.

Likewise, a dinner table argument about the term “swordfish steak” is less about the semantics and more about the underlying tension that Marcus wants Michelle to end things with Bill. But the strained tone of the scene plays like an overly dramatic “Seinfeld” skit.

That said, the actors do well with the uneven material. Scott Rodgers is delightfully neurotic as his life gets upended. Watching him berate two nearly naked women as he tries to compose a song gets at his struggle to be his own man and grapple with his complicated emotions. He is also playful, dancing in joy when a tricky situation is resolved or accidentally turning off the light in the bathroom while Alex is taking a shower.

Likewise, Kristin Slaysman is appropriately mercurial as Michelle. (The actress is reminiscent of Michelle Pfeiffer in both looks and spirit.) Slaysman seems game for the comic, sexual and emotional  demands of her role. Her lack of inhibitions serves her well even when Michelle is belittling herself. Slaysman also manages to find graceful moments, as when she walks barefoot on the earth, absorbing the ground’s nutrients and energy.

In support, Ashley Spillers steals her scenes acting as the film’s lone voice of reason and Robert Longstreet gives a sly, enjoyable turn as Bill.

“Dr. Brinks & Dr. Brinks” mines its comedy from situations not jokes, which is fine but it never quite gets at the stories and trauma of the characters that underlie the dark humor. It yields moments that are enjoyable and meaningful as the adept cast members play up their characters' foibles and insecurities. How the characters and their relationships break and start to mend provides a poignant conclusion to the film and leaves viewers satisfied, especially since the film, like grief, avoids true closure.

Overall, “Dr. Brinks & Dr. Brinks” has a split personality. Unable to decide if it should be a comedy or a tragedy, the modest film lands as a mostly successful tragicomedy.