The Blaze's former host signed with the Great America Alliance, then clowned herself on social media 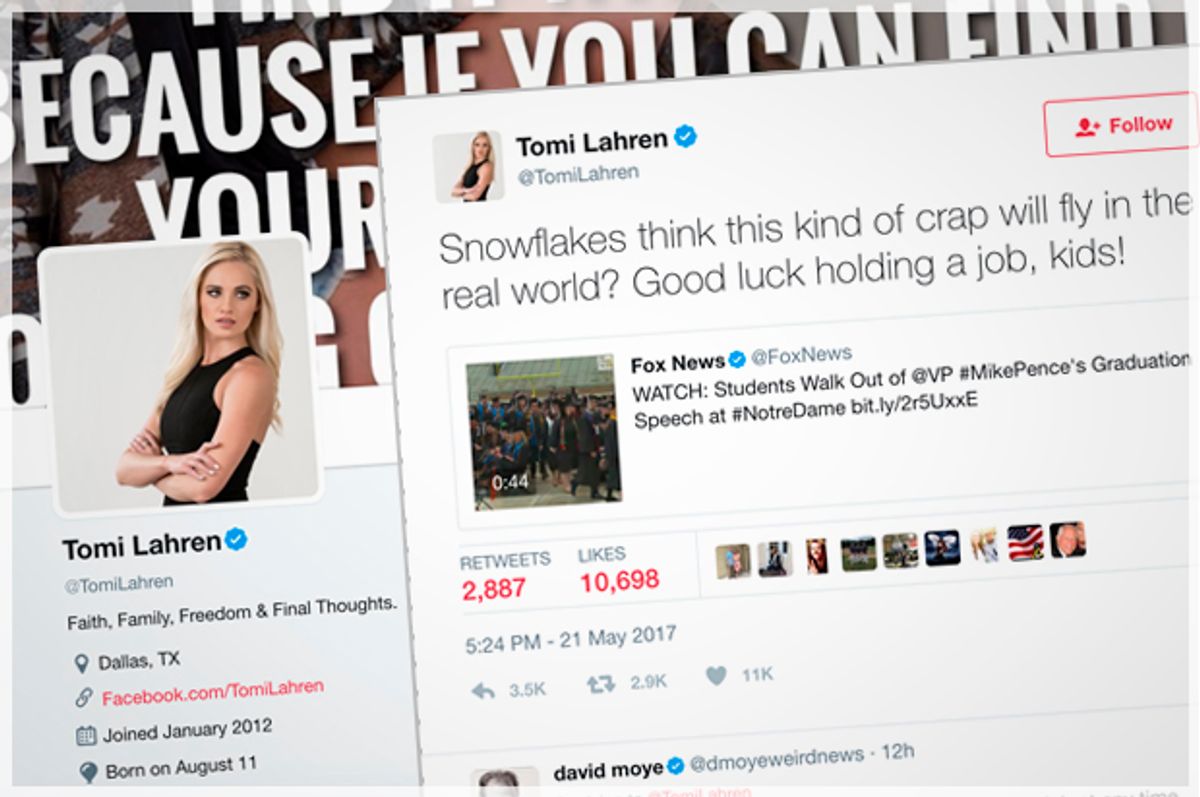 According to USA Today, recently unemployed right-wing commentator Tomi Lahren has just landed a new job at the Great America Alliance, a PAC dedicated to furthering the grass-roots agenda of President Donald Trump. Lahren will assist the group in, "communications and messaging strategies."

"Using her growing national profile, Lahren will help GAA execute communications and messaging strategies to expand grassroots support of the President’s policies across the country," The advocacy group stated in a press release.

"Political sore losers and 'social justice warriors' across the country are committed to sabotaging the President's America First agenda every chance they get. If you are tired of the political tantrums and hypocrisy, stand with Tomi Lahren and Great America Alliance today to counter the largest group of whiners the country has ever seen," a website from the group reads.

In a statement from Lahren, the 24-year-old former host for The Blaze took aim at the liberals and promised to champion Trump's, "America First agenda."

"The liberal establishment and mainstream media continue to fight our president at every turn, so it's critical for all Americans to step up and do all they can to advance the America First agenda," her statement reads.

Lahren was either fired (according t0 her) or suspended (according to her employer) from Glenn Beck's The Blaze in late March shortly after she made a series of mildly pro-choice comments on ABC's daytime chat show, "The View."

The host subsequently sued the organization, claiming she was she wrongfully terminated for her relatively progressive stance on the classic wedge issue. Contrasting reports suggested that Lahren was suspended, then terminated for her unprofessional behavior, which included demeaning other staffers. The two parties recently settled the lawsuit.

It's actually a rather hot news day for Lahren, who spent last night and much of this morning chest-deep in a Twitter fracas.

After group of graduating University of Notre Dame students walked out during Vice President Mike Pence's commencement speech on Sunday, Lahren took the social-media platform, decrying the actions of the "snowflakes."

News of her new job having not yet surfaced at the time of her tweet, other users fired back at her for lecturing others on how to keep a job. It was something.