Frontline's "Bannon's War": An efficient examination of the philosophy steering the White House 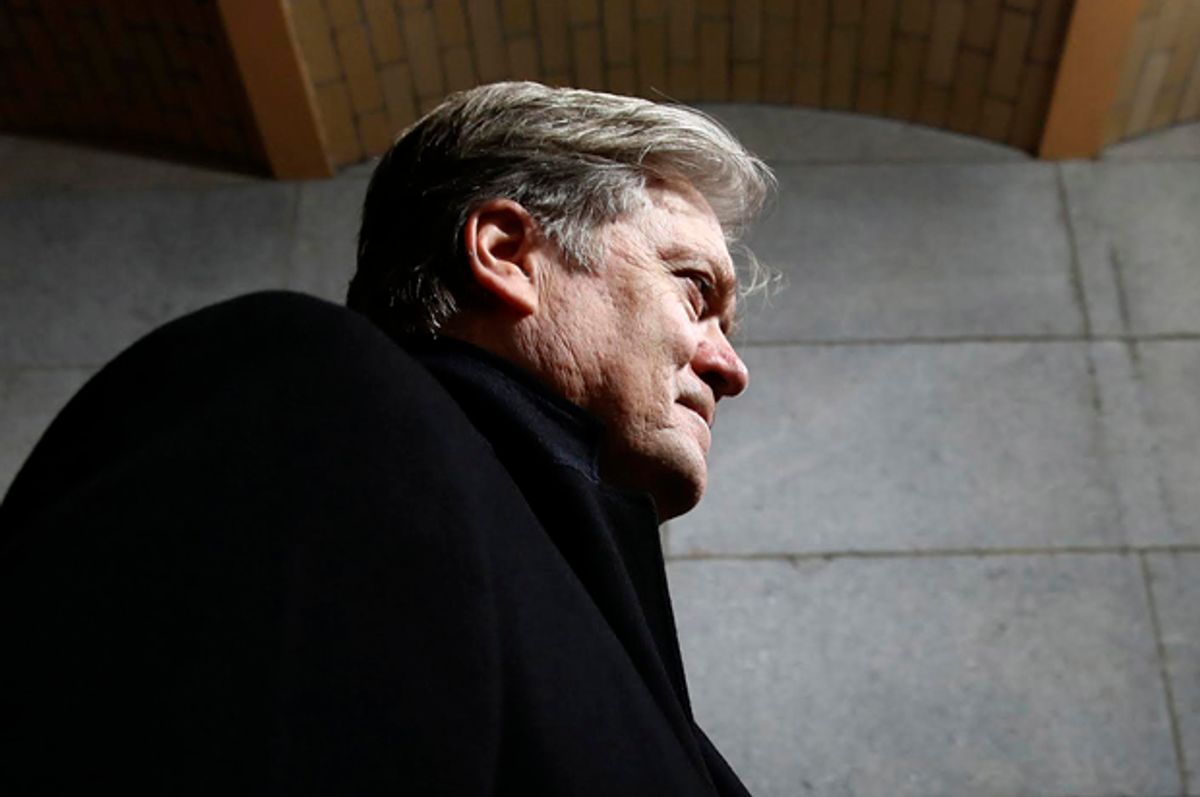 There may be no figure more polarizing, frightening and bewildering than White House chief strategist Steve Bannon, a man who makes George W. Bush’s former chief of staff, Karl Rove, seem about as harmful as a zit. If this comparison seems facetious, chalk it up to the aftereffects of watching “Bannon’s War,” documentarian Michael Kirk’s latest effort for “Frontline” that premiers Tuesday at 10 p.m. on PBS member stations and online.

Nothing in this “Frontline” version of Bannon's biography affords a glimpse of humanity or warmth in the man, and perhaps that is for the best. Instead “Bannon’s War” shows its subject as the polarizing, intelligent and power-driven figure that he is.

In “Frontline” fashion, it does this without explicitly saying so. Former Breitbart News employees, journalists from The Washington Post, The Boston Globe, The New York Times and The New Yorker, as well as Bannon’s former writing partner and ex-friend Julia Jones are among the interviewees who build a case that invites people to come to that conclusion themselves.

That is, assuming the viewer isn’t a ticket holder on the Trump Express.

How fairly “Frontline” treats Bannon and whether this Kirk-directed episode is terrifying or validating is matter of perspective. Kirk and his co-writer Michael Wiser tacitly acknowledge this in the cold open before the credits roll by returning to the furor surrounding Donald Trump’s signing of the first executive order barring the U.S. entry of travelers from predominately Muslim countries. To those resisting Trump’s agenda, the 9th Circuit Court’s halt on the executive order was seen as their first victory.

Bannon also viewed this protest spike as proof that “shock and awe” tactics could win, in that it sent a signal to Trump’s base that the president wasn’t merely spouting xenophobic and racist rhetoric on the campaign trail to get their vote. “Bannon thinks, ‘This is great. We’re killing it. We’re winning. We’re doing everything that we said we would,’” former Breitbart spokesman Kurt Bardella says in the film. “‘We are beating down the establishment and the liberals into submission. We are literally making America great again.’”

Kirk’s list of Frontline projects includes the quadrennial election specials known as “The Choice” as well as the two-night, four-hour miniseries “Divided States of America” that debuted 48 hours before Trump’s inauguration.

“Bannon’s War” feels frugal in comparison to these efforts, clocking in at just under 55 minutes. But the installment moves with efficient speed as well, spending minimal time chronicling Bannon’s early years and affording a relatively slender view of his tenure on Wall Street and in Hollywood, where he built his personal wealth.

Much has been written about Bannon’s early obsession with warfare and nationalist foreign policy. Kirk and Wiser’s script doesn’t dive into this aspect of the man, choosing instead to devote the bulk of the show to illustrating the ways he applied this personal paradigm to shape Breitbart News into a propaganda machine for the far right.

Here is where the “Frontline” episode energizes its premise — as it talks about the bombastic Andrew Breitbart joining forces with “bookish Bannon,” showing archival footage of the two cavorting in front of a frat house with Breitbart bragging about past exploits.

Bannon infused the site with funds from wealthy conservatives such as the Mercer family, and after Andrew Breitbart's death Bannon went on to use the site to promote the agenda of Citizens United chairman David Bossie and boost the careers of then-senator Jeff Sessions and Sessions' former communications director Stephen Miller.

But it was only when Donald Trump emerged to run for president that Bannon saw what one interviewee termed as a "vehicle for his perspectives." Those views crystallized in Trump’s inauguration speech which, as Jones observes, may have been in the president’s hands but was pure Bannon. “The line about carnage in America, I think that was Steve,” she says. “Every now and again I hear things and I go, 'OK, that’s Steve.'”

“Bannon’s War” adheres to the “Frontline” model of lining up recent coverage to recapitulate what we already know in a linear pass. Here the element of what we may not realize may be even more important. By training its focus on the strategy that goes into creating the barrage of frightening headlines, the hour provides a cogent glimpse at Bannon’s scorched-earth philosophy.

“There’s an almost fetishistic desire to blow everything up,” says Washington Post film critic Ann Hornaday, referring to Bannon’s post-9/11 Ronald Reagan film “In the Face of Evil,” which she also describes as “apocalyptic” and “febrile.”

“Bannon’s War” is not without its frustrations, but a portion of that can’t be helped by Kirk or Wiser. Specifically former Breitbart staffer Bardella and former editor-at-large Ben Shapiro simultaneously lend crucial insight into Bannon’s thought process while taking stances that smack of disingenuousness.

Referring to his decision to quit Breitbart News in 2016 as did several other longtime staffers, Shapiro explains, “When a news outlet decides that it is more important to maintain close ties with a particular candidate or politician than it is to maintain the integrity of their journalists, that’s no longer a journalistic organization. It is a propaganda platform.”

This only makes sense if one views most of what Breitbart did before, including its friendly coverage of certain Republican politicians and lobbying organizations and vilification of minorities and civil rights organizations, as being something other than propaganda.

Nevertheless, Shapiro's and Bardella's insights and others help “Bannon’s War” explain why Bannon continues to wield influence in the White House and with Trump’s supporters and slice through reports that the chief strategist has fallen out of favor with Trump and could be on his way out of the White House.

Visuals from Trump’s journey to and from a rally in Pennsylvania, marking his first 100 days in office, indicate otherwise. “Bannon’s War” closes with these images, perhaps doubling as a warning. Alarming though that may be, Kirk’s decision to end the hour here signals that this story is far from over. Perversely it may also make a viewer anxious to see which political developments inspire the filmmaker’s next sobering work.