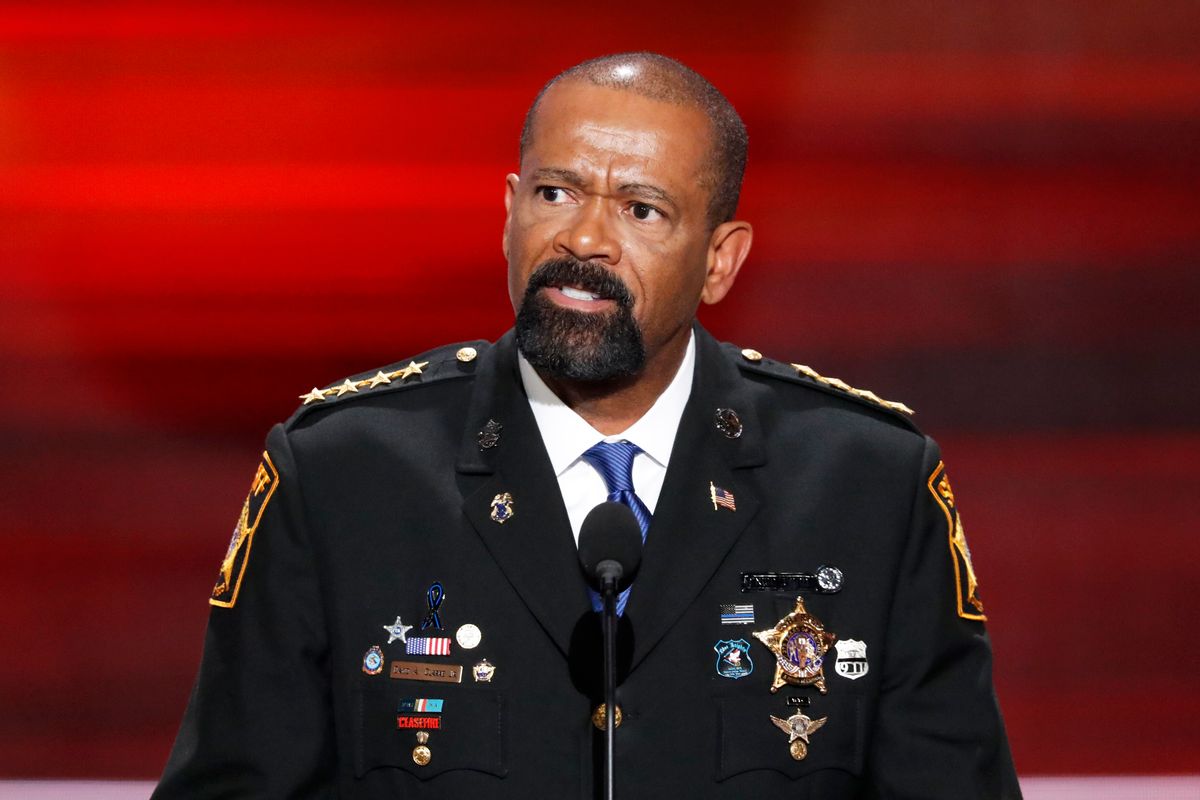 An incident on an airplane in which Milwaukee County Sheriff David Clarke had a passenger detained and interviewed after the flight without having committed a crime has raised further concerns about Clarke's alleged abuses of power, despite possibly being selected for a job with the Department of Homeland Security.

When passenger Dan Black boarded a plane at the Dallas/Forth Worth International Airport last January he thought he had recognized Clarke, who was sitting in first class, but wasn't completely sure because Clarke was dressed in Dallas Cowboys gear — and not his typical uniform garb decorated with questionable pins. He also wasn't wearing his signature hat. Black alleged that he approached Clarke and had asked him if he was indeed the notable sheriff. Clarke confirmed his identity, and then asked the passenger if he had a problem, according the Milwaukee Journal Sentinel.

After the meeting, Clarke sent a text message to one of his captains and directed his men to follow the passenger after the flight and detain him for further questioning, according to the Journal Sentinel. "Just a field interview, no arrest unless he become an asshole with your guys," Clarke sent to Captain Mark Witek. "Question for him is why he said anything to me. Why didn't he just keep his mouth shut?"

"Follow him to baggage and out the door," Clarke also wrote. "You can escort me to carousel after I point him out."

When he landed in Milwaukee, he was met by cops, who stopped him. The interaction was captured on camera. This is how the Journal Sentinel described the video:

One video shows five uniformed officers with a police dog — not six as Black had earlier alleged — waiting for Clarke and Black at Gate 54 of Concourse D at the Milwaukee airport.

Clarke is one of the first to exit the plane, saluting his staff when they greet him. Black follows 2 1/2 minutes later and two of the deputies engage him. Later video shows Clarke being escorted by a captain, a sergeant, a deputy and the dog near Gate 30. Black is accompanied by two deputies about nine minutes later.

Black is suing the sheriff — as well as several of his deputies — and the phone exchange has been made available as a result of the lawsuit. The case has even gotten federal investigators involved to evaluate how Clarke and his men handled the incident, according to the Journal Sentinel, but there have been no charges for civil rights offenses.

Black alleged he was detained and interviewed and was a victim of unlawful stop and arrest, but Clarke's version of the story slightly differed.

Clarke said that Black had questioned him about his identity, and when Clarke confirmed it Black stood over him in a threatening manner and shook his head. "Plaintiff stopped adjacent to Sheriff Clarke's seat as Plaintiff boarded the plane and asked him if he was Sheriff Clarke," Clarke's attorney said in court filings. "Plaintiff then, while standing over Clarke and in very close proximity to Clarke given the confines of the airline cabin, and in a physically threatening manner, stared at Clarke and shook his head at him for a prolonged period of time."

Since the case has been made public, Clarke has targeted Black in online attacks. In a post on his Facebook page, Clarke included a meme that read: "Cheer up, Snowflake . . . If Sheriff Clarke were to really harass you, you wouldn't be around to whine about it."