50 teachers, paraprofessionals and teacher assistants at Passages Charter School are prepared to walk off the job 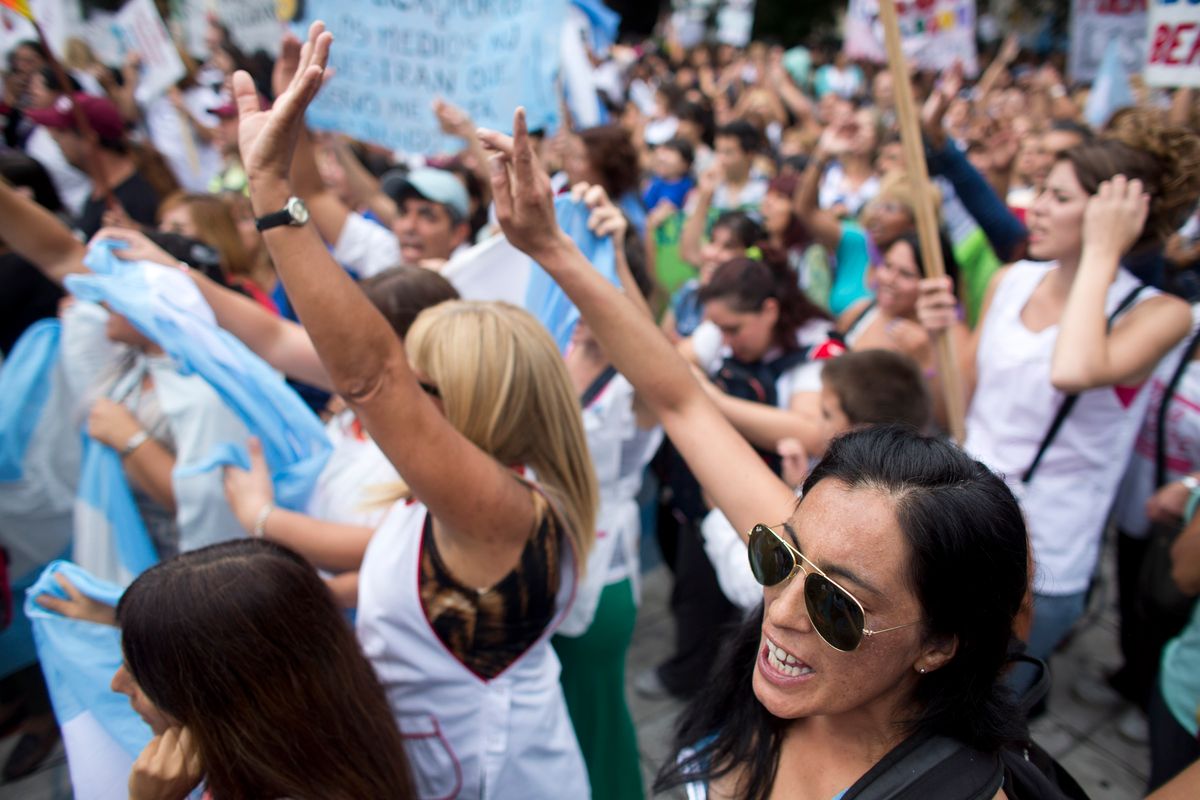 Teachers chant slogans during a demonstration in front of the Ministry of Education in Buenos Aires, Argentina, Wednesday, March 26, 2014. Striking teachers in the Buenos Aires province are demanding a wage increase higher than what is currently being offered by the provincial administration. The strike is in its 15th day, affecting more than 3 million students. (AP Photo/Victor R. Caivano) (AP)
--

For the third time in eight months, Chicago charter school teachers are on the verge of going on strike.

After a year of negotiations with management for their first contract since unionizing last spring, close to 50 teachers, paraprofessionals and teacher assistants at Passages Charter School are prepared to walk off the job Thursday morning if an agreement is not reached. It would be the first time teachers at a U.S. charter school ever went on strike.

The educators are members of the Chicago Alliance of Charter Teachers and Staff (ChiACTS), Local 4343 of the American Federation of Teachers, which represents roughly 1,000 educators at 32 charter schools in the city.

A stand-alone school in the Andersonville neighborhood, Passages is managed by the nonprofit Asian Human Services (AHS) and is home to more than 400 students, mostly from immigrant and refugee families.

“For the past 12 months, we have been bargaining for a contract that gives us voice and guarantees fair working conditions for teachers and staff and fair learning conditions for our students,” Gina Mengarelli, a third-grade teacher at Passages and union activist, said at a rally on Friday. “But to this point, AHS has refused to make us an offer that provides for those things.”

The vote to strike passed unanimously May 4 and signals a growing spirit of militancy among Chicago’s charter school workers. Last October, another planned strike by ChiACTS teachers at the UNO Charter School Network was averted by a last-minute deal. Similarly, in March, members of A Council of Educators, the ChiACTS affiliate at ASPIRA charter schools, came close to a work stoppage before management moved to settle. The Chicago Teachers Union — ChiACTS’s sister local representing nearly 30,000 educators at Chicago Public Schools — also came within a hair’s breadth of walking off the job last October, but that, too, was avoided by an eleventh-hour agreement.

At Passages, the major unresolved contract issues are salaries and transparency on how management uses funds. Unlike other single-site charters in the city, which do some of their own fundraising, Passages is funded entirely by the public school district.

In a statement, AHS representatives said, “we are working very hard to reach a fair compromise with the Union” and alluded to the difficulty of negotiating a contract “at a time of significant financial uncertainty, given the local and State-wide budget issues that have resulted in reduced funding to all charter schools.”

But the union says AHS is mismanaging funds, spending far more on executive salaries than on student and personnel costs compared to other charter schools. At the same time, Passages teachers say they are paid 20 percent less than their counterparts at comparable charters, and programs for students—including music and language classes — are being cut.

“One of the core reasons educators formed a union at Passages was to have more voice in decisions that affect their students,” said ChiACTS president Chris Baehrend.

“We’re still trying to find out some financial information that AHS is withholding or only giving in bits and pieces, and we’re confused why they’re trying to withhold it,” Mengarelli told In These Times.

The lack of financial transparency on the part of AHS is the subject of a pending claim with the Illinois Attorney General’s Public Access Bureau, according to the union.

“None of us want to strike. We want to be in our classrooms with our students,” Mengarelli said. “But if it takes a strike to force AHS to make changes that improve the education of Passages students, then we will be on the picket line until we achieve those improvements.”