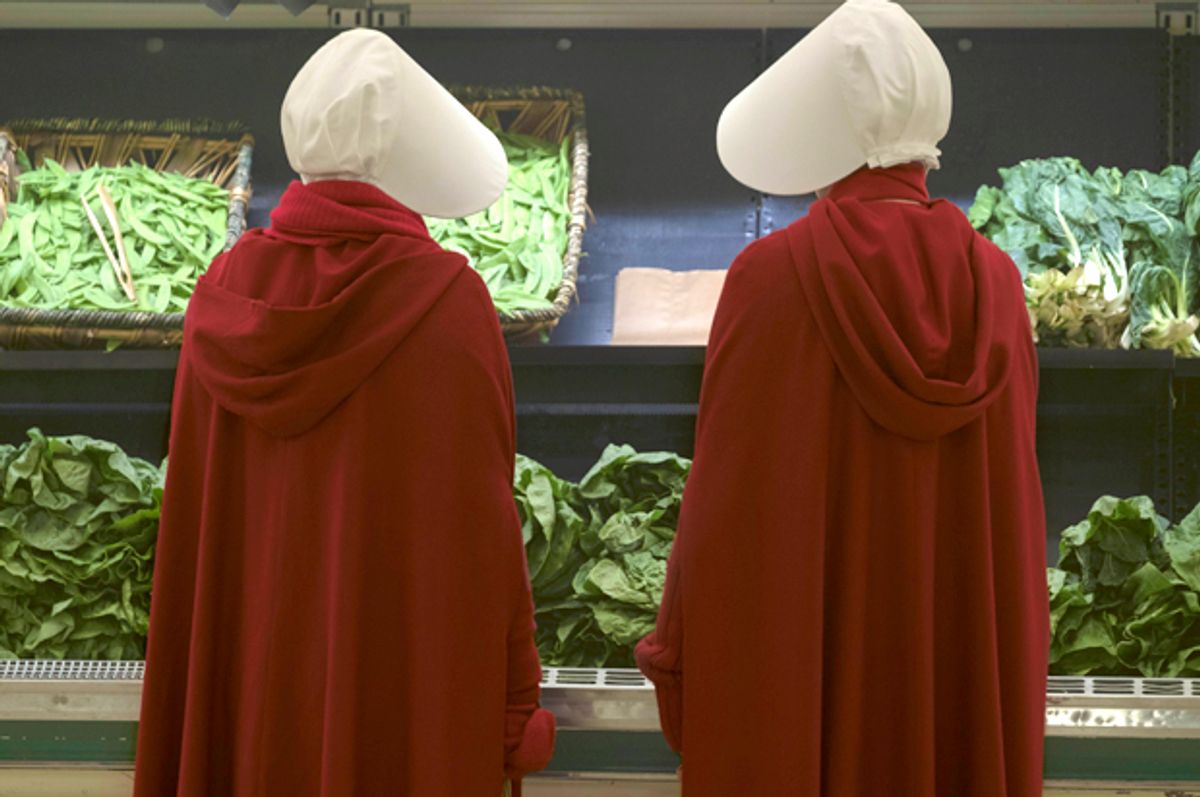 When Margaret Atwood penned the dystopian novel "The Handmaid’s Tale" in 1985, a moralistic Christian conservative was in his second term in the White House and the Religious Right was ascendant. Meanwhile, Atwood had observed the conditions of the 1979 Iranian Revolution, in which a formerly secular, Westernized society was suddenly transformed into a patriarchal theocracy. Under the Ayatollah, women were legally obliged to wear the veil and were banned from many college majors; it would take nearly 40 years of struggle from women’s rights advocates in Iran to restore many, but not all, of their pre-revolutionary rights. Intriguingly, huge numbers of Iranian women actually marched in favor of the revolution that would diminish their rights, which Atwood took note of.

Hence, in Atwood’s tale, the U.S. has devolved into a Christian fundamentalist society in which women are used as breeding stock and servants for the caste of elite men. At the time, Atwood observed the situations in the U.S. and Iran and thought that the U.S. might not be so far off from a similar fundamentalist patriarchy. “I started noticing that a lot of the things I thought I was more or less making up were now happening, and indeed more of them have happened since the publication of the book,” Atwood is quoted as saying in a 1986 New York Times interview. Atwood noted the presence of an American Catholic sect that called women “handmaids” and “threatened the handmaids according to the biblical verse I use in the book -- sit down and shut up.”

''You could say it's a response to 'it can't happen here,'” she added, explaining the novel as an exercise in discovering how a fundamentalist society might come to pass in the United States:

As the book has been serialized into a weekly television show for Hulu, the story has taken on new historical and social significance. Wisely, the producers updated the era in which the tale takes place: the religious despots preach against the evil of “Tinders” and “gender traitors” (homosexuals); a passing scene in last week’s episode showed “God Hates Fags” spray-painted on a building in the background, a phrase borrowed from the theocratic hate-speech provocateurs of the Westboro Baptist Church.

“The Handmaid’s Tale” show has been wildly popular, so much so that it has been renewed for a second season on Hulu. Naturally, many conservatives haven’t been enjoying the show, or its popularity; I mean, no one likes seeing an explication of how their mores and values enacted might degenerate into a fascist regime.

So as the show becomes impossible to ignore,  a number of polemics by right-wing pundits have reverberated around the web, some decrying the show, others attempting to argue that it’s actually serving up a pro-conservative message — a jejune rhetorical treatment that the far right previously performed on noted socialist George Orwell in attempting to count him as one of them.

I have been following the right’s mental gymnastics regarding “The Handmaid’s Tale” with glee. What follows is my attempt to catalog the best of the worst takes on the show. Their tortured rhetorical logic is humorous, but it’s also a good case study in the way that the conservative mind works.

“‘The Handmaid’s Tale’ Isn’t About Christianity Or Conservatives, It’s About Fundamentalism,” by Gracy Olmsted, in The Federalist

You know who are bad people? Fundamentalists. It doesn’t matter which side they’re on! The left thinks “The Handmaid’s Tale” is about the right, but it’s not. It’s actually about the left. From Olmsted's piece:

In both the book and the film, Offred tells her reader that this dystopian society has championed “a return to traditional values. That’s what they fought for.” It’s the sort of phrase that makes the left rejoice, because they think it skewers the right.

But here’s the problem. While Olmsted is fairly moderate herself, lots of right-wing thinkers and politicians are fundamentalists to some degree. Mike Pence thinks you can shock the gay out of people. George W. Bush’s cabinet was absolutely lousy with young-Earth creationists. Say what you will about the grander state of the American left, but few liberals or Democrats are stricken with fundamentalism. You can’t say the same for the Republicans. Just look at Ted Cruz—based on his rhetoric, he probably thinks “The Handmaid’s Tale” is depicting a utopia.

Bad Take #2: No Sense of Irony

“Hillary Says ‘The Handmaid’s Tale’ Is Coming. She's Out Of Her Mind,” by Elliott Hamilton, in the Daily Wire

The Daily Wire is angry because Hillary Clinton thinks that women’s rights are slowly being stripped away, a situation she analogizes to what happens in “The Handmaid’s Tale.” Elliott Hamilton is absolutely sure that they’re not, and also he hates this analogy. “The United States of America is nowhere close to becoming a theocracy,” he writes. “Even though the nation was founded based on Enlightenment principles that emerged from Judeo-Christian society, the United States does not possess a national religion; the Constitution protects the individual's right to practice their religion freely almost without exception.”

Hmm. I’m trying to remember a time that someone in the executive branch did something that made it clear that the U.S. government favored some religions more than others. Maybe this happened in the past four months? Maybe there were some huge protests at a bunch of airports around the U.S.? It’s all fuzzy to me.

I also have faint memories of eight years of a theocratic conservative running the country, who took pains to appoint Christian fundamentalists across all registers of the government and the judiciary, and dismantled the Department of Justice’s Civil Rights Division. And maybe there’s something going with women’s health care clinics closing all around the country and attacks on women's rights? I mean, I’m not an esteemed Daily Wire columnist, like, the kind of journalist who does research and pays attention to the news before penning his column, so I'm not the one to ask.

And the worst take of all:

“How ‘The Handmaid’s Tale’ May Be Too Close to Reality in California” by Collin Garbarino, also in The Federalist

“The Left has always used the novel as a cautionary tale against sexual oppression,” Garbarino writes, “but now many people seem to be asking, ‘Could it happen here?’ But what if it already has happened here,” he poses. “In reflecting on the themes of ‘The Handmaid’s Tale,’ I began to feel that some of the practices of the Republic of Gilead bear a striking resemblance to California’s laws regarding gestational surrogacy.”

Garbarino uses the example of homosexual men who want to have children as a case study. “The goal of Gilead’s repressive regime was to control reproduction for a small, influential group of men,” he writes. “California is doing the same thing for a small influential group of men... [who have] trouble birthing their own babies because they’re gay. They need these surrogates more than the leaders of fictional Gilead do.”

You read that right: Garbarino is comparing the systematic rape of enslaved women in "The Handmaid’s Tale" with women who serve as surrogate mothers for gay men, to illustrate how in California “the ideology of gay rights speak with religious authority.”