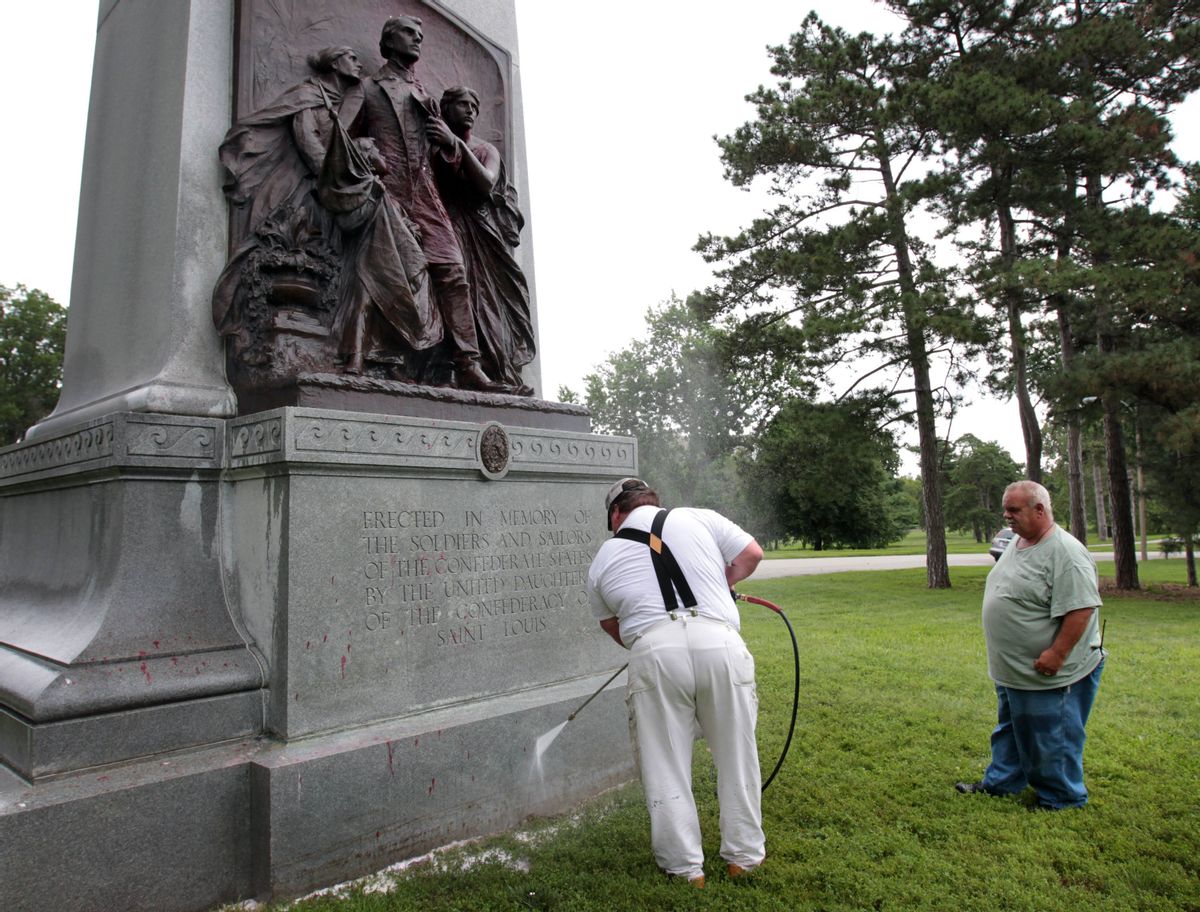 FILE - In this June 24, 2015, file photo, St. Louis Parks workers clean a Confederate memorial in St. Louis after it was spray painted with the words, "Black lives matter." Confederate monuments in a half-dozen places this week have been defaced _ a telling sign of the racial tension that permeates post-Ferguson America. (David Carson/St. Louis Post-Dispatch via AP, File) MANDATORY CREDIT; EDWARDSVILLE INTELLIGENCER OUT; THE ALTON TELEGRAPH OUT (AP)
--

On May 14, The Daily Caller, a popular conservative website, published a news story about recent protests in Charlottesville, Virginia. Led by prominent white supremacists and anti-Semites, the protesters, some carrying the battle flag of the Confederacy, expressed their anger over the city’s plans to remove a large monument to Robert E. Lee.

The article noted that some 200 people had carried torches in a march to the monument, a procession it called “visually striking.” It also quoted a young black man speaking favorably about one of the protest’s organizers.

The story, it turned out, also carried some critical omissions: It didn’t disclose that its author, Jason Kessler, is supportive of white supremacist groups, and on the day of the march had himself made a speech to the protesters in which he praised fascist and racist organizations, thanked a prominent Holocaust denier, and declared the beginnings of a cultural “civil war.”

ProPublica contacted Kessler after the article’s publication. In the course of an extended interview, Kessler said he saw efforts to remove symbols of the Confederacy as part of a broader attack on white people who, in his view, face an “existential crisis.”

“White people are rapidly becoming a minority in the U.S. and Europe,” he said, adding that he resented the country having to take in immigrants and refugees. “If we’re not able to advocate for ourselves we may go extinct.”

ProPublica also contacted The Daily Caller. Widely read in right-wing circles — the site gets nearly 10 million unique visitors per month, according to Quantcast — The Daily Caller was co-founded in 2010 by Tucker Carlson, who served as editor-in-chief until late last year when he took a prime-time job at Fox News. Carlson, who hosts a nightly show in the time slot that once belonged to Bill O’Reilly, remains co-owner of the site. Like Breitbart News, The Daily Caller has found an audience by posting a constant stream of punchy news stories, some of them imbued with racial overtones.

“The story is factually accurate and plainly states what happened at the event,” said Paul Conner, executive editor of The Daily Caller. “But in light of his activism on the issue, we have mutually agreed to suspend our freelance relationship with him.”

Asked about the substance of Kessler’s speech in Charlottesville, Conner offered no comment on Kessler’s statements. In an email, he said only, “We pay writers for journalism, not their opinions.”

The debate around Civil War monuments has become one of the many flashpoints at a racially volatile moment in the country’s history. In recent years, public officials throughout the South have sought to vanquish symbols of the Confederacy: In 2015, South Carolina took down the confederate flag that had long flown over the state capitol; more recently, New Orleans removed three statues of rebel war leaders that had dotted the city’s landscape, as well as a tall stone obelisk commemorating a Reconstruction-era uprising led by the White League, a racist militia.

In a speech that gained national attention, New Orleans Mayor Mitch Landrieu argued that the statues had originally been erected in an effort to “rebrand” the Confederate cause. “These monuments purposefully celebrate a fictional, sanitized Confederacy; ignoring the death, ignoring the enslavement, and the terror that it actually stood for,” Landrieu said.

The Daily Caller has followed these developments closely, and its readers seem to appreciate the coverage. Kessler’s story generated 146 comments, many expressing support for the Confederate monuments, some openly hostile towards African Americans. A May 20 piece on an Alabama Senate bill that would preserve the monuments in that state spurred nearly 130,000 shares on Facebook, as well as a lengthy chain of comments, a large number of them lauding Alabama lawmakers for their stance.

The event in Charlottesville included an appearance by Richard Spencer, president of the National Policy Institute, a white nationalist organization. Kessler quoted Spencer in the article, which chiefly portrayed the protest as a pushback against “left-wing ideologues who want to tear down statues, change the names of buildings and rewrite history books to place white people in an unsympathetic and even hostile light.”

Kessler’s story made no mention of his own talk before the protesters. Speaking during an outdoor luncheon, Kessler praised groups such as the American Vanguard, an organization that espouses the eradication of the country’s democratic structure of governance. He hailed Matthew Heimbach, who views himself as a warrior against Jews and people of color, and Sam Dickson, a denier of the Nazi Holocaust who has been involved in racist activities since the 1970s.

In the interview, Kessler, accused ProPublica of trying to sabotage his journalism career. Kessler, 33, lives in Charlottesville, where he pleaded guilty to a misdemeanor assault charge in April; in mid-May he was arrested again, this time for disorderly conduct stemming from a scuffle at an anti-racist rally in his hometown. Kessler is fighting the charges and is slated to go to trial later this year. Kessler has written stories for his own website, Jasonkessler.net — his tagline is “Real News” — VDare, and GotNews, the website run by Internet provocateur Charles C. Johnson. In addition to written journalism, he posts video logs to YouTube, composes fiction and poetry, and maintains a constant presence on Twitter. He heads a small activist group called Unity and Security for America that aims to drastically limit immigration to the U.S. from non-European countries so as to stave off the impending “white genocide” in America.

Kessler describes himself as an “activist-journalist” on the issue of saving monuments honoring the Confederacy. He said he views the white supremacists and fascists as allies but doesn’t subscribe to all of their views. He insists he’s not a racist or an anti-Semite.

“I just wanted to thank people for coming out and supporting the monuments. That doesn’t mean I support all their politics,” he said of his talk to the protesters. “I’m not going to sit and pass judgment on these people for the views they express. I don’t condemn or endorse what other people say.”

“The most extreme people are the bravest people,” Kessler told ProPublica. “There’s a paucity of people who are willing to take a stand for white civil rights.”

Kessler said whites may need to create their own homeland, an ethnic state for people of European descent. Still, he added in the interview, “As far as being hateful towards other people, I’m not on board.”

In a YouTube clip posted the same dayas his interview with ProPublica, Kessler floated the theory that Jews are relying on “collusion and nepotism” to seize power and influence for themselves.

In Kessler’s view, his friends within the neo-Nazi and white supremacist milieu aren’t hurting anybody. In any case, he said, he’s more concerned about the “little white girls being blown up by” Islamist terrorists.

The Anti-Defamation League, which studies trends on the extreme right, has a different take, noting that white racists and anti-government militants have left a long trail of violence in their wake, killing some 255 people and injuring more than 600 in terror attacks over the past quarter century, according to a recent ADL report.

In a March attack, a white supremacist and former U.S. Army soldier impaled an African-American man with a 26-inch sword near New York’s Times Square, killing the victim. In Portland, Oregon, another white supremacist, Jeremy Christian, allegedly stabbed two men to death on a commuter train on May 26 while shouting anti-Muslim statements.  And earlier this month, law enforcement investigators found bomb materials at the Florida home of a 21-year-old member of the Atomwaffen Division, a neo-Nazi group, leading to federal charges.

“Kessler is representative of what hate looks like today, operating at the center of several movements that have arisen over the last few years,” said Oren Segal, Director of the ADL’s Center on Extremism. “He clearly sympathizes with white supremacists, but like many on the alt-right seeks to deflect such notions by presenting his words and activity as a mere response to multiculturalism and an assault from the left.”