"Cliterate" author Laurie Mintz: "We have to get the clitoris out there in the mainstream" 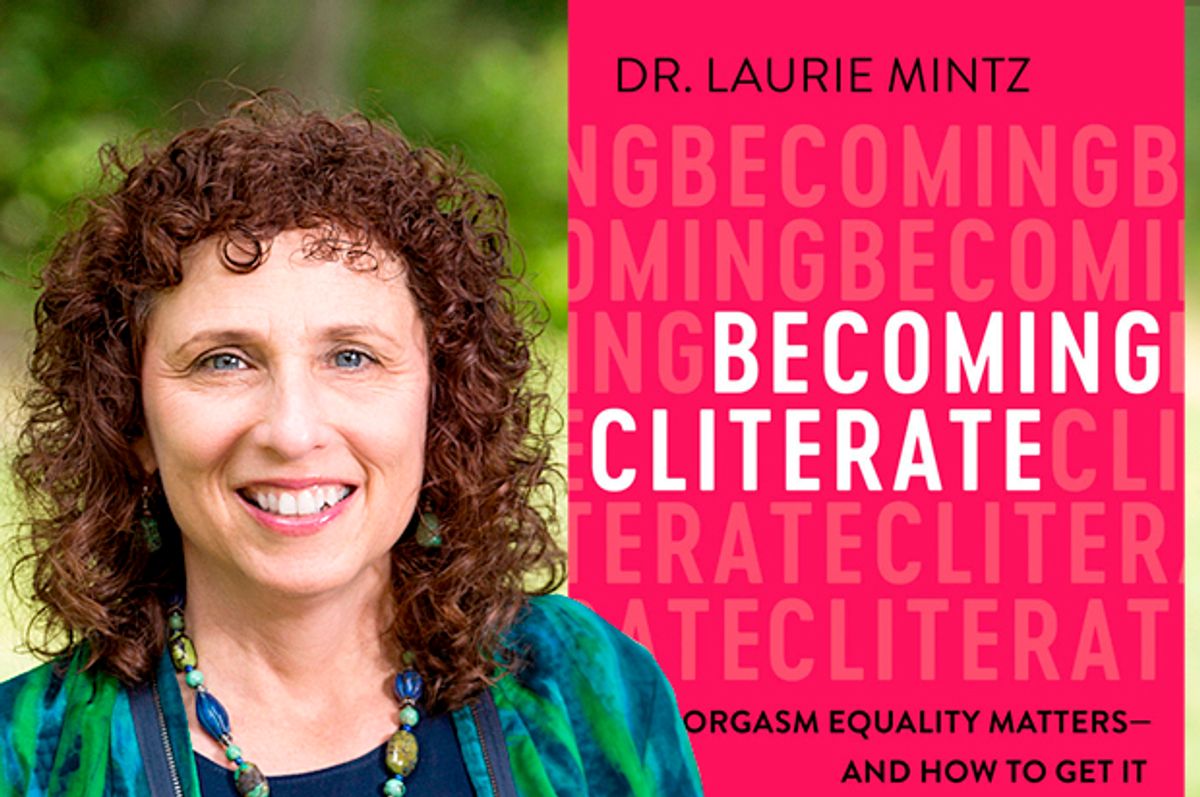 Spoiler alert: The following article discusses plot details from “The Handmaid's Tale.” If you haven’t seen it yet, stop reading now.

Turn on the television, watch a movie, overhear a random conversation, and you don't have to wait too long for the male sexual organ to get its share of attention. Penis! It's everywhere! But when it comes to women, our baby-making parts — or our boobs — are far more likely to be the subject of discussion than our pleasure centers. Note, for instance, that the most prominent pop culture moment the clitoris has had so far this year was the genital mutilation featured in "The Handmaid's Tale."

This is something that I think a lot of women who grew up in my generation knew about. The generation of "Our Bodies, Ourselves," and feminism and we knew about our clitoris. And I've always been a huge fan of the clitoris myself.

Then I started teaching human sexuality at the University of Florida about five years ago, and I became quickly aware that this whole body of knowledge had been lost to this generation. They really, truly did not know about their clitoris. They think there's something wrong with them when they can't orgasm through intercourse alone. When I teach, I get notes from students all the time [saying,] "This has changed my life," from men and women. They're getting their sex ed from porn and so of course they don't know this. So really my goal was my students and realizing that we need to bring this body of knowledge back to a whole generation that's been lost.

Let's talk about that and about why this information has been lost or why it just never blossomed in the way that it should have.

There's this tradition that girls are going into their sexual lives with this expectation that they are there as performers basically — that sex is something that you do for men. This is of course obviously very heteronormative in the way we're talking about this, and I know that that's also why girls who are same sex-oriented report higher sexual satisfaction. But if you're talking about male-female sex, especially among younger people, it does seem to be driven by this idea that you're there to serve the man. And when we're so empowered in so many other ways, it just feels like, What the hell is happening? In the most intimate way possible, we're going backwards.

There are so many women I talk to or teach that identify as feminist, and they're empowered in other aspects of their lives. They completely lose their agency and their voice in their most intimate relationships. I think there are so many overt and insidious ways that happens and that women are socialized in our culture. The portrayals we just talked about, the slut shaming, the whole objectification of women's bodies really gives the message to girls that my goal is to please you, rather than to be pleased. To put our focus externally. There are just so many messages that go to the conscious and unconscious that will create this situation where girls go into sexual encounters without agency for their own needs and their own pleasure.

So what one woman needs is going to be very unique to her and you must learn that by touching yourself and then take the next step communicating it to a partner. But we don't hear. I mean, there are some portrayals of that in some popular culture, but mostly it's just a shameful secret.

So the first hurdle is getting women to figure out what they like via vibrator use. But then it's even an bigger hurdle to get women to carry that over into their encounter. And to me it all goes back to that same notion that "He should be able to please me and he should be able to please me with his penis." Women know what to do when they're by themselves, and then as soon as the penis enters the picture, they just give that up and think, Oh, but this is what's supposed to please me. It's really, really, really about teaching women and empowering women that you need to get the same kind of stimulation when you're by yourself as when you're with a partner. Teaching women to communicate that and really creating whole sexual scenarios and cultural scripts that don't get the same foreplay, intercourse, male ejaculation, game over.

It's not going to be an easy change, but I think it is an absolutely necessary worthwhile one.

What often happens is, first and foremost, the primary objective for heterosexual females is the male’s pleasure, the male’s satisfaction. So often if a woman has an orgasm at all, that's like an afterthought, like that's just a bonus. You don't often see that even depicted in films or whatever. If it is, it's like this heightened, over-the-top porny performance of it. So what can we do to change that?

The time is really right to change this now. I'm not the first person who's tried to make clitoral knowledge — or the word — mainstream. It's like we keep getting this lesson and then we keep losing it. The time is now to really get this knowledge out there and not lose it again. Not have it go underground again. The way that we do that is by talking to each other, talking to our daughters, saying the word. We have to get the idea, the clitoris, the word, out there in the mainstream.

I don't think twice if I see the word penis anywhere. I walk around New York City and in every subway station there's a poster for a TV show called "I Love Dick." I would never imagine a poster that said, "I Love Clit." That's all I'm saying.

Let's talk a little about "The Handmaid's Tale." I was thinking about depictions of female desire and orgasm and the ways that they are limited and oppressed, or conversely expressed in popular culture. One of the things I found fascinating is the idea of female pleasure — the fact that a woman is mutilated in the story, which is not part of the book. This particular part of the female anatomy is such a source of fear and confusion and ignorance.

I was really struck by the whole portrayal of female genital mutilation. It was portrayed that it was for her being a lesbian or a "gender traitor." I was very struck when the aunt said, "You can't want what you can't have." The commander later referring to it as "a small problem." It captures what I talk about in the book in terms of the portrayal of the disregard of any trace of sexual agency, any trace of sexual pleasure. The handmaids are just a vessel; they're a hull; they're a vessel for reproduction, the place to put the penis for the baby.

It's a really horrific extension of how in popular culture we call all women's anatomy a vagina — the part that's most useful to men rather than to women. It's like "The Handmaid's Tale" brings this to its extreme, that it's simply in relation to the needs of men or those powerful in society. I also was watching the intercourse — rape really. You can see in her there in that one scene where she's like sort of enduring it and thinking, "I wish this would be over." Sadly, that sentiment also captures the consenting encounters of many women today, just sort of putting up with it, hoping it's over or faking pleasure.

I also think my book and "The Handmaid's Tale" do carry a message of change and hope and empowerment. Obviously that's central to my book, but it's really clear in "The Handmaid's Tale" to me how Offred survives and is strong and how there's a resistance movement. And she then reclaims her sexual agency when she knocks at Nick's door. It's like she reclaims her own agency and there's that glimmer of hope in there, in the midst of women as just a vessel. I just loved that part of it.

A lot of generations of women grew up with this unspoken message like sex is something that you're going to endure and you're not going to like it and it won't be fun and you're going to put up with it. Then we kind of skipped over to this place where women are expected to act like porn stars and are going to give this exaggerated sexual performance of extreme pleasure that the merest touch is going to get them off. It feels like there is this disconnect. Where's that moment of, well, What if your partner saw you having authentic sexual pleasure?

Right, it's an expectation, like we're supposed to be doing something that isn't even realistic. It's staged.

And it feels like so much of the sexual conversation takes place in a vacuum. As a parent of teens, I often feel the challenge of how much do I discuss? How much do I talk about? How do I raise kids who are educated about what they want from their relationships, from their own sexuality, in a way that's also not weird? It's challenging, and I really struggle with that because I want my kids to grow up with the knowledge and the expectation that their relationships are going to be equitable and they will be enjoyable.

There's such a long history of movements of women, of people who are oppressed a variety of ways. This is how it happens — change happens at the individual level and then the group level, talking about it and having it be raised up to be part of the cultural conversation. Then it changes the expectation of what we deserve, what we want. It's about OK do this in your own life and then talk to other women and then keep passing the knowledge forward and let's all create a culture where women's sexual agency and pleasure are just as important as men's.