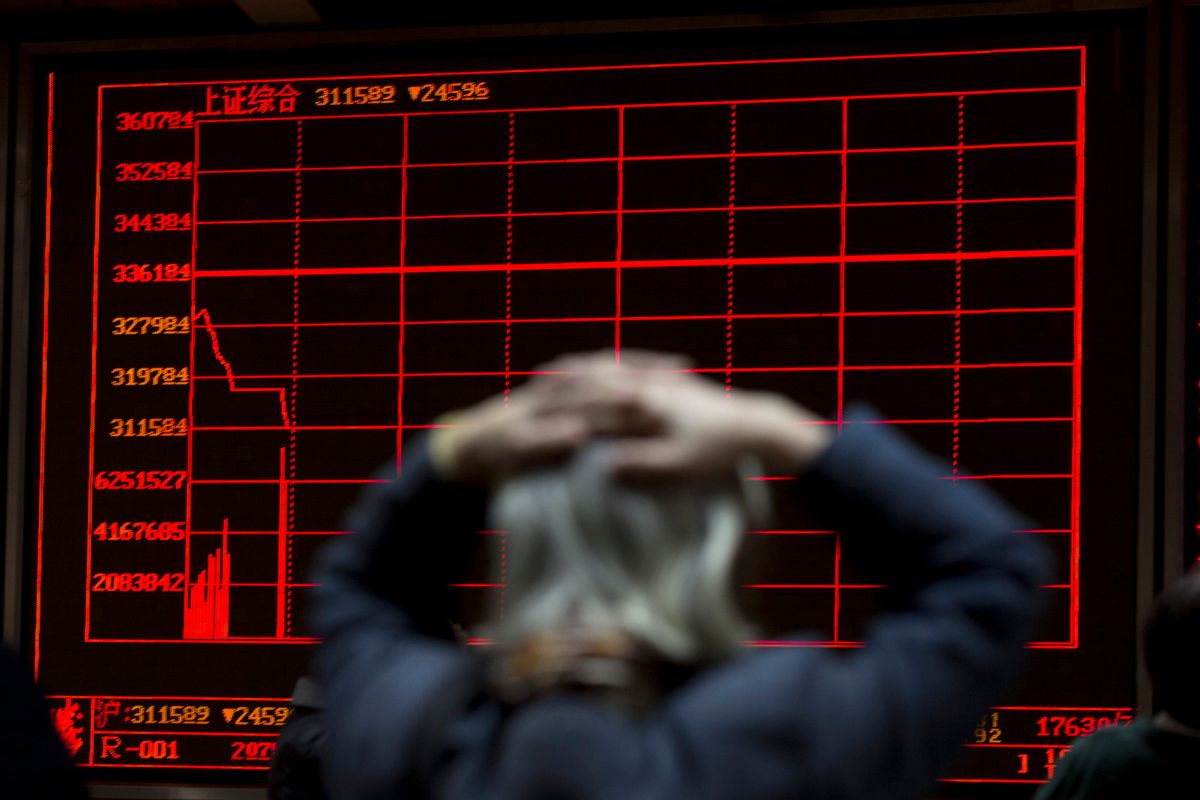 In his prime, consultant David Blaszczak bragged that he made millions for his hedge-fund clients when he predicted important Medicare funding changes.

“Warren Buffett can eat it,” Blaszczak wrote in one email in 2013, referencing the legendary stock trader.

He boasted in that same year to a finance executive: “I am a beast that cannot be stopped.”

Stopped he was on Wednesday, when federal prosecutors announced an indictmentagainst Blaszczak and three co-defendants, including an executive-level Medicare employee, for allegedly turning confidential government information into windfall profits on Wall Street. The Securities and Exchange Commission also has alleged securities law violations, seeking to recoup $3.9 million in “ill-gotten gains.”

The case targets the narrow but lucrative world of “political intelligence,” a web of consulting firms like one that Blaszczak co-founded in 2014. Such firms traffic in crumbs of information coaxed out of federal employees, or simply good hunches, and make money by landing contracts with Wall Street firms.

Political intelligence workers track countless decisions Medicare and the Food and Drug Administration make each month about which hospital beds, heart valves, surgical techniques or drugs will rise or fall in value — or if the government will pay for them at all.

It’s a Washington, D.C., industry that reflects the big business of U.S. health care. While patients who get radiation treatments for cancer or dialysis after kidney failure are largely unaware, small tweaks in what the government pays for these services can mean millions to hedge funds and their elite investors.

From the outside, the tips that Blaszczak fed to Wall Street clients on Medicare’s coming moves seemed uncanny. Federal investigators found time and again that each disclosure started with a meeting with Christopher Worrall, an executive staff member with the Centers for Medicaid & Medicare Services who started at the agency in 1999.

The two men became friends in 2001, records show, and began meeting for lunch, golf rounds and baseball games. Blaszczak worked at CMS from 2000 to 2005 as a health insurance specialist and, later, as special assistant to the CMS administrator. Blaszczak introduced Worrall to a political intelligence contact in 2011 who offered him a job, the SEC complaint says. Worrall declined but leveraged the offer for a $10,000 raise from Medicare, according to court records.

Prosecutors say Worrall also wrote in an email to his wife that working in political intelligence could be a “big opportunity” because of the “political links.”

“If I ever do want to really get into politics, like run for Congress, these are the types of people I’d need to be around,” Worrall said, according to the SEC complaint.

Blaszczak and Worrall had one of their meetings on May 8, 2012, at the Medicare headquarters in Baltimore, where Worrall signed his friend in as a guest. That day, prosecutors allege, Blaszczak learned that Medicare was planning to cut the amount it reimburses doctors who used certain types of therapy on cancer patients: intensity modulated radiation therapy and stereotactic body radiotherapy.

The following day, Blaszczak relayed the information to three contacts at Deerfield Management, a health-focused hedge-fund firm. All three men have been charged in the case.

Within weeks, the information led to short sales by the hedge-fund firm in three stocks that make radiation equipment and software. Because short sellers make money when a stock’s price falls, the move was essentially a bet in favor of the stocks tanking when news of the pay cut broke.

Just days after Medicare announced the proposed pay cuts in July 2012, the three stocks fell in value. For Deerfield-managed funds, it resulted in a big payday, worth more than $1.8 million, prosecutors say.

Blaszczak’s contacts at Deerfield were pleased; they sent his firm a $29,000 bonus. Ted Huber, 55, then a partner with Deerfield, credited Blaszczak: “I think Dave earned his bonus with his work on [radiology]. We did pretty well on that and it was really 100% Dave[,]” an email quoted in the indictment says.

“Mr. Huber and his counsel look forward to his day in court where it will be shown that this prosecution is an ill-advised attempt to transform entirely innocent research and trading into a crime,” Berke said in an email.

Attorneys for Worrall and Blaszczak declined to comment; the law firm representing the fourth co-defendant, Deerfield partner Robert Olan, did not respond to requests for comment. All of the men are accused of 10 charges or more, some with maximum prison terms of 25 years, with Blaszczak facing 18 counts.

A CMS spokesman declined to comment when asked if Worrall still worked at the agency.

Deerfield said through a spokesman that it is “committed to maintaining a strict culture of compliance and the highest ethical standards. We are cooperating fully with the government’s investigation.”

Blaszczak’s note to investors predicting the radiation pay cut made its way back to Medicare, the indictment says. There, one staffer surmised someone had access to internal information. Another staffer replied: “Where does he get his information from? It is pretty unbelievable and will probably blow up at some point.”

With Worrall continuing to feed him information, prosecutors say, Blaszczak’s run continued. The two men had lunch together in January 2013 and again in March at the Medicare agency’s headquarters in Baltimore.

Soon after, Blaszczak sent a note to clients and heard back from Jordan Fogel, one of the hedge-fund contacts alleged to have profited from the radiation prediction. Fogel emailed that he wanted to “catch up soon and figure out how we can re-ignite the Blaszczak-Fogel money printing machine,” according to an email cited in the indictment.

Fogel, 33, pleaded guilty this month in the case to six counts, including conspiracy to commit securities fraud and defraud the U.S., and is cooperating with prosecutors.

Prosecutors say that on March 5, 2013, Blaszczak offered to introduce Worrall to a staffer on the Senate Finance Committee, which oversees Medicare. According to the indictment, Blaszczak wrote in an email: “after a certain amount of years in the government your knowledge and experience is going to be extremely valuable. You might as well meet as many people as possible along the way.”

Worrall replied: “I do appreciate you making offers to put me in touch with people like this.”

Later that month, Worrall allegedly gave Blaszczak confidential internal documents laying out a plan for Medicare to slash its pay rates for dialysis. Worrall oversaw a “real-time” database at Medicare showing a decline in the use of medications in dialysis, lowering the cost of care for major providers of outpatient dialysis services like Fresenius and DaVita.

Other investors were predicting a pay cut, based on public reports about the decline in drug use. But, according to the indictment, Blaszczak told contacts he had an inside track and predicted a steeper cut than anyone: 12 percent.

That summer, Worrall and Blaszczak went to a baseball game together, and Blaszczak continued to assure his hedge-fund clients that the dialysis pay cut would be significant. His contacts put in their short sales, betting that the stocks for Fresenius would soon fall.

On July 1, 2013, Medicare unveiled the proposed 12 percent cut, and soon the stock fell nearly 9 percent. The tip was worth $865,000 to the Blaszczak clients who are also accused of fraud, the indictment says. It was then, prosecutors allege, that Blaszczak boasted of being the “beast that cannot be stopped,” and revealed to his clients that internal Medicare documents guided his prediction.

Fogel expressed regret over not making a bigger bet on Blaszczak’s advice: “Wish we didn’t wuss out but will still make a couple million on it,” he wrote in an email, according to the indictment.

Soon after, prosecutors allege, Fogel’s firm renewed a contract with Blaszczak for $100,000.

Prosecutors did not claim that Worrall shared any of Blaszczak’s rewards. The cases rely on the 2012 Stop Trading on Congressional Knowledge (STOCK) Act, meant to cut down on insider trading by members of Congress, their staffs and executive branch employees.

Prosecutors say they pursue the cases to protect against corruption within government and cheating on Wall Street, according to a statement from Joon H. Kim, acting U.S. attorney for the Southern District of New York.

The indictment gives little detail of the men’s interactions after 2013, save for a 2014 email exchange between Blaszczak and Worrall. In August of that year, Blaszczak asked Worrall to become a “part owner” of a new political intelligence company he was starting, saying he expected that he and two partners would make $2 million that year.

Blaszczak wrote that the men would “kill it working together.”

Worrall replied: “You’re like a drunk whore to me. Hard to resist. Lol. Let’s talk.”