Will Justice Kennedy be the Supreme Court's hero on gerrymandering? Don't count on it

Reformers have long hoped that Justice Kennedy will rule to end the partisan gerrymander. It won't be that easy 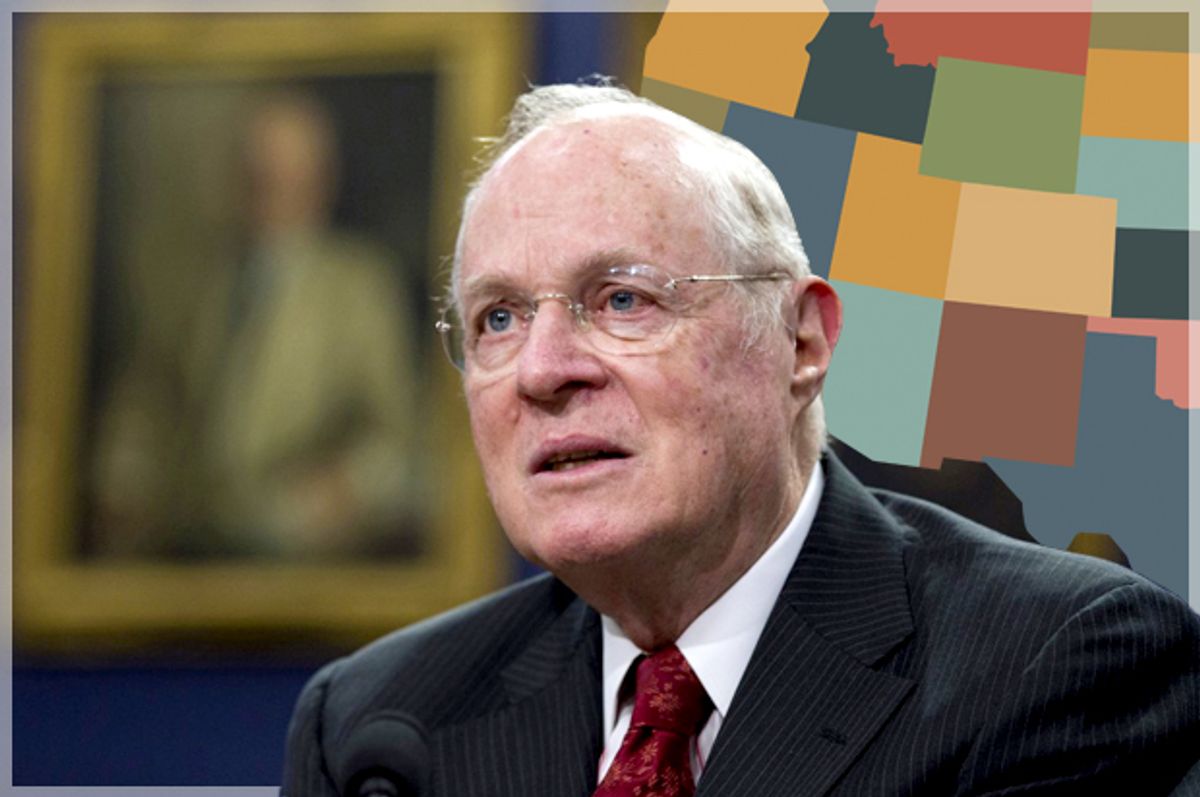 In Hollywood, they’d call it "Justice Kennedy and the Quest for the Holy Grail."

For more than a decade now, redistricting reformers have hunted down a silver-bullet democracy theorem – the transparent, fair-minded standard that would conclusively demonstrate when a partisan gerrymander crosses the line.

The audience? One person: Justice Anthony Kennedy, still the Supreme Court’s decisive swing vote. Trouble is, the ending is in more doubt than ever.

A dedicated group of political scientists, law professors and more claim they have discovered that gerrymandering miracle drug. It’s called the Efficiency Gap, and it works by measuring partisan asymmetry – or the votes that savvy mapmakers “waste” when drawing district lines that either “crack” one party’s votes and divide them among many unwinnable districts, or “pack” them as intensely as possible into as few seats as possible.

The Efficiency Gap is at the heart of Whitford v. Gill, a case from Wisconsin in which a panel of three federal judges found that Republicans unconstitutionally gerrymandered the state legislature in their favor after the 2010 census. The judges took the nearly unprecedented step of demanding lawmakers craft brand new maps statewide for 2018 legislative races.

After years of effort, Whitford is likely to be on the Supreme Court docket this fall. The justices could make that decision in private conference as soon as early June.

But here’s the twist: Is Justice Kennedy still concerned about partisan gerrymandering?

When a surprising coalition of justices delivered a landmark ruling against racial gerrymandering in late May, Kennedy was on the other side. More discouraging for those who’d cast Kennedy as the gerrymander-slaying White Knight: The decision he signed onto, written by Justice Samuel Alito, casts partisan gerrymandering as a time-honored political practice – one of the very reasons why the Supreme Court has stayed away from a national standard.

Let’s back up for a moment.  When the last major partisan gerrymandering cases reached the Supreme Court, back in the mid-2000s, Kennedy, the longtime swing justice, sided with the conservative wing. In Veith v. Jubilerer, Kennedy voted with a 5-4 majority that turned aside an argument from Pennsylvania voters who claimed opportunistic GOP redistricting violated their constitutional right to equal protection.

That result was no surprise: The Supreme Court has consistently refused to accept any constitutional standard when it comes to partisan gerrymandering ever since the founding of the country. So when it came time to decide Veith in 2004, Justices Scalia, Rehnquist, Thomas and O’Connor had seen enough. They did not think the Court belonged in the business of determining what defined an overly partisan gerrymander or mandating a remedy. They were essentially ready to close the door for good.

Kennedy, however, refused to go that far. He voted with the Scalia bloc, but did not sign on to their opinion. Instead, in his own tight, rigorous concurrence Kennedy argued that while the Veith plaintiffs failed to show a manageable standard, some future case might. Then he tantalized reformers with breadcrumbs pointing to exactly what that standard would need to achieve to earn his support and allow judicial intervention. It must be a “limited and precise rationale,” based on a “clear, manageable and politically neutral standard,” that shows partisanship was “applied in an invidious manner” or in such a way “unrelated to any legitimate legislative objective.”

Kennedy presciently noted that while sophisticated new mapmaking software represented a potential threat to democracy, “these new technologies may produce new methods of analysis that make more evident the precise nature of the burdens gerrymanders impose on the representational rights of voters and parties.” If so, he concluded, “courts should be prepared to order relief.”

The justice could not have been more of a visionary: As new software and data sets made it possible to sort voters surgically and turn district lines into firewalls – aided by hardened partisanship and clustering of like-minded voters – the Republican REDMAP strategy reinvented the gerrymander after the 2010 census as a tool to lock in control at all levels of government despite a deeply and nearly evenly divided country.

One would imagine that Kennedy might be more concerned than ever. But that might not be the case.

The big surprise for most from last month’s game-changing Supreme Court ruling on racial gerrymandering in North Carolina, Harris v. Cooper, might have been that the justices redrew their own carefully etched ideological lines. Clarence Thomas joined the liberal wing in a 5-3 decision that declared long-contentious North Carolina congressional districts to be unconstitutional racial gerrymanders.

While Thomas has often been the conservative least likely to side with the liberal justices, perhaps his reasoning could have been expected. Thomas simply opposes using race data in districting, period. (Give him serious points for consistency: Thomas has backed this principle whether the goal was creating safe Democratic seats in the ‘90s or, as in Harris, creating more reliably GOP seats by packing minority voters into as few Democratic seats as possible.

No, the real story wasn’t Thomas, an unlikely prospect for reformers on Whitford, but Kennedy. Kennedy was not only among the three naysayers, but this time signed onto the dissenting opinion, written by Justice Alito. Alito carefully drew the line between racial gerrymandering, which courts have disallowed, and partisan gerrymandering, which the Supreme Court has failed to find unconstitutional. It’s not hard to imagine that he wrote knowing that Whitford was on the Court’s horizon – and deftly trying to bring Kennedy to his point of view.

As Alito wrote, “if a court mistakes a political gerrymander for a racial gerrymander, it illegitimately invades a traditional domain of state authority, usurping the role of a State’s elected representatives.” Partisan gerrymandering may be “unsavory,” Alito noted, and some might find it “distasteful.” But it “dates back to the founding,” he argued, and the Court’s previous decisions have made clear that it is nevertheless allowed.

Those who don’t like it do have a way to fight back, he suggested: The ballot box. “When those responsible for adopting a challenged plan contend that the plan was devised for partisan political ends, they are making an admission that may not sit well with voters,” he wrote, “so the explanation should not be lightly dismissed.” If the courts decide the partisan gerrymandering battles, Alito wrote, they’d become “weapons of political warfare” where “losers in the redistricting process … seek to obtain in court what they could not achieve in the political arena.”

Of course, when those winners rig the maps to help generate a decade-long advantage, and then suggest the other side fight back at the ballot box, well, the only response to such circular reasoning is a rueful laugh. You might have heard one from Wisconsin, where a majority of voters backed Democratic legislative candidates in 2012, but Republicans won nearly two-thirds of the seats. Every district, red and blue alike, are now so hopelessly safe that 49 percent of state assembly races last November had no major-party competition.

Or perhaps it came from Michigan, where Democratic state house candidates have won more votes in every election on these maps, but never come close to capturing the chamber. Or from any of the bellwether states like Ohio, North Carolina or Pennsylvania, where swing seats these days have less swing than Coldplay. Exactly one U.S. House seat has changed hands in those states during this cycle. That covers 141 races. The seat-vote ratio is disturbingly out of whack in these states as well: Republicans hold a 35-12 House edge despite how closely competitive the states are otherwise.

A study last month by the Brennan Center for Justice, part of NYU’s School of Law, found that most congressional gerrymandering is focused in seven states – Texas and those six swing states whose delegations have been weighted red, including Pennsylvania, Michigan and North Carolina. The report argued that the GOP controls 16 to 17 House seats due to its redistricting advantage – almost all of that advantage coming from seven states, most of them swing states like Pennsylvania and Michigan where Republicans controlled all aspects of redistricting and drew themselves these practically unbeatable lines. In states like that, the Efficiency Gap would be a useful tool to address our specific gerrymandering problem.

But the Efficiency Gap test is not a panacea. If we want to restore meaningful competition, fair representation and ensure that every vote counts, we need to enact genuine structural reforms like larger, multi-member districts combined with ranked-choice voting. That would broaden the spectrum of opinion in Congress, triple the number of newly competitive seats, and give nearly everyone across the country a say in a congressional election that mattered. That’s how we take on the underlying fact that more than 85 percent of our congressional seats are so safe, for one party or the other, that they can be called with nearly 100 percent certainty two years before the election, based on partisan data alone. The big problem isn’t redistricting – it’s districting itself.

With Kennedy’s vote more unpredictable than ever, reformers who have long hoped he would step in and create a national standard must also be thinking about the big-picture reforms that might come next. Kennedy’s Veith concurrence also spelled out how reformers might challenge partisan gerrymandering on First Amendment grounds. As two such cases, from Maryland and North Carolina, make their way toward the Court, however, whispers of a possible Kennedy retirement get louder – one more reason to broaden the strategy to create fairer elections.

Kennedy concluded his Veith decision with these stirring words: “The ordered working of our Republic, and of the democratic process, depends on a sense of decorum and restraint in all branches of government, and in the citizenry itself.” That decorum and restraint – the very functioning of our institutions – appears more threatened and fragile every day. Despite a succession of court victories for voting rights and the democracy agenda, however, Kennedy’s mindset is surprisingly murky. Maybe that’s not entirely a bad thing: “The ordered working of our Republic,” after all, shouldn’t rest in the hands of one Supreme Court justice. If we changed the very nature of how we think about districting itself, it wouldn’t.