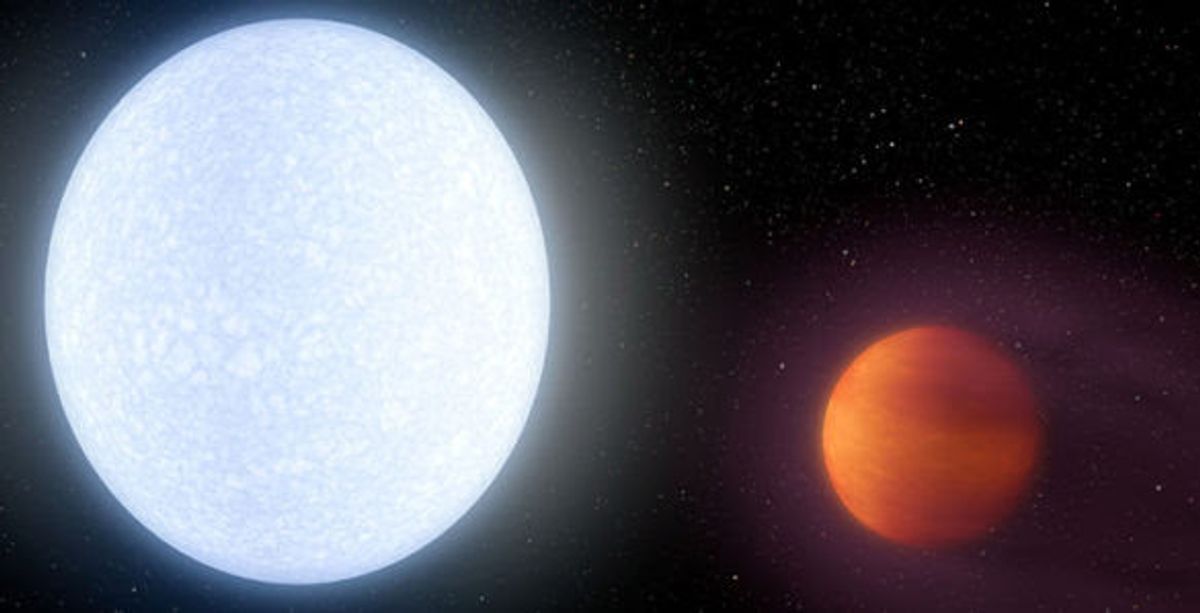 If Icarus were a planet, he'd undoubtedly be KELT-9b. That's the designation astronomers have given to a Jupiter-size planet orbiting KELT-9, a large, bright star some 650 lights years away in the Cygnus constellation, as reported yesterday in Nature. KELT-9b, named after its star, is so close and so hot that the physics suggest that its gaseous surface actually glows like a star.

"We measure the dayside temperature of KELT-9b to be about 4,600 kelvin [or 7800 Fahrenheit]," wrote the authors of the Nature paper. That means the planet is only 1,200 degrees kelvin cooler than the surface of our sun. Indeed, some cooler stars are actually on par with the temperature of this strange planet, which has about 2.5 times the mass of Jupiter yet a similar radius due to a higher density.

Like Icarus, KELT-9b seems to have flown a bit too close to its star.

KELT-9b orbits its host star once every 1.48 days. At such an extremely close distance, a back-of-the-envelope calculation suggests that KELT-9b is about 5.1 million kilometers (or 3.2 million miles) away from its star. For comparison's sake, Mercury — the closest planet to our sun, and whose surface temperature is around 4,000 degrees kelvin cooler than KELT-9b — orbits the sun once every 88 days, and at a distance of 58 million kilometers away.

Due to its situation so close to its star, KELT-9b is in danger of shrinking. That's because scientists predict that its parent star will slowly strip KELT-9b of its atmosphere, perhaps leaving a comet-like tail in its wake.

KELT-9's solar system is unusual for having planets in the first place, mainly because of the characteristics of its main star. Stars are categorized by a letter system, which goes O, B, A, F, G, K, M, from hottest and largest to smallest and reddest, respectively. The sun is towards the smaller end of the spectrum, a measly G-class star — good news for us, as smaller stars last longer before expiring. Of all the exoplanets (meaning, planets outside of our solar system) discovered, nearly all of them orbit F, G, K, or M stars, on the cooler end of the spectrum. No planet has ever been discovered orbiting an O or B-type star, and "only six have been found that transit hot, A-type stars," according to the writers of the paper in Nature. KELT-9 is an anomaly. Right at the dividing line between A- and B-type stars, it is the hottest star ever discovered with its own exoplanet.

"KELT-9 is only the seventh A-type star known to host a transiting companion, and is by a significant margin the hottest, most massive and most luminous known transiting giant-planet host," wrote the authors of the Nature paper.

KELT-9b joins the ranks of "most bizarre" exoplanets discovered since the boom of exoplanet discoveries began in the late 2000s, prompted by NASA's planet-hunting Kepler telescope. In 2012, astronomers discovered a planet twice the size of Earth that was likely to be made of diamonds.