NATO, Paris and Trump's latest tweetstorm make clear the president no longer listens to even his closest advisers 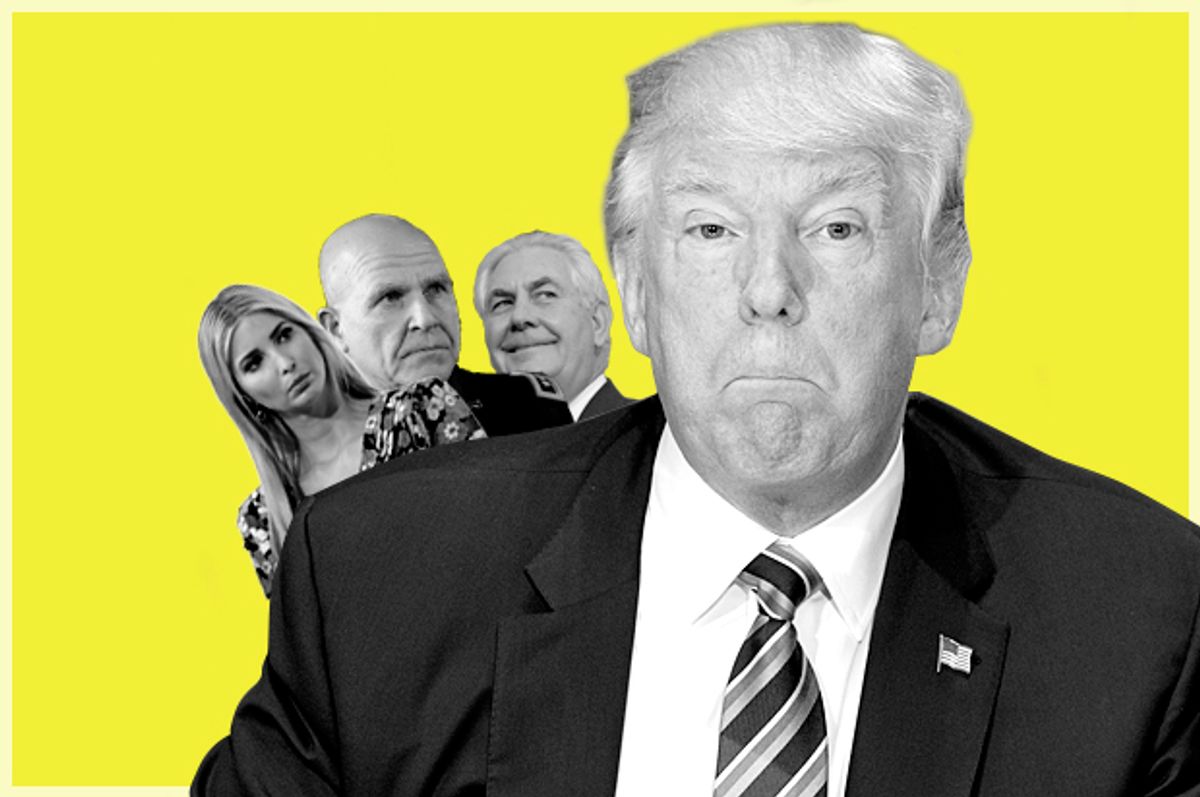 The last few days have revealed that President Donald Trump has now gone beyond just playing the different factions within his administration off one another. He has apparently rejected them all. What happens when the leader of the most powerful nation on Earth refuses to listen to anyone?

Over last weekend Trump took to Twitter and demonstrated that he has no intention of listening to anyone or following even the most  basic legal advice. I mentioned on Monday that he had rudely insulted the mayor of London in the wake of Saturday night's terrorist attack. He also taunted gun safety advocates and referenced a need to "get smart" on terrorism, which in the past he has defined as using torture and killing family members of those associated with terrorist groups. His Twitter tantrum was widely noted in the press but it doesn't seem to have made him think twice. On Monday morning he really woke up on the wrong side of the bed and started angrily tweeting once again. Even his staunchest supporters are becoming alarmed.

The starkest example would be a tweet by George Conway, husband to presidential counselor Kellyanne Conway and himself a former "elf " who helped create the Paula Jones scandal back in the day. He wrote this:

One might have thought his wife could bring this up in a meeting, but apparently the Conways felt this was a better way to communicate. One can only speculate, but it's reasonable to suspect that this means Trump isn't listening to his senior adviser Kellyanne anymore.

The George Conway tweet, as well as a number of other statements of concern from GOP lawyers, came in response to a startling series of tweets by the president on Monday morning which The New York Times described this way:

Saying he preferred “the original Travel Ban, not the watered down, politically correct version” he had issued in March, Mr. Trump attacked both the Justice Department and the federal courts. He also contradicted his own aides, who have suggested he was causing a pause in travel, by calling the order “what we need and what it is, a TRAVEL BAN!” He said it would be imposed on “certain DANGEROUS countries” and suggested that anything short of a ban “won’t help us protect our people!”

Then he added, “The Justice Dept. should ask for an expedited hearing of the watered down Travel Ban before the Supreme Court - & seek much tougher version! In any event we are EXTREME VETTING people coming into the U.S. in order to help keep our country safe. The courts are slow and political!”

To say that this is not helpful to his cause is an understatement. Neal Katyal, who represented the challengers in the 9th U.S. Circuit Court of Appeals, wryly responded:

When Trump wrote, "I am calling it what we need and what it is, a TRAVEL BAN!" it didn't just help the plaintiffs suing his administration but also made liars of his staff, who have sworn, undoubtedly at the instruction of legal counsel, that there was no ban. He admits in his statement that he knows he shouldn't say it and apparently just doesn't give a damn.

It was also bizarre for Trump to accuse his own Justice Department of being "politically correct" when it adapted the original order to reflect the findings of the court. It's run by the staunchly loyal Jeff Sessions who doesn't have a politically correct bone in his body. Indeed, he's best known for his obnoxious political incorrectness. But according to The New York Times, the president is unhappy enough with Sessions that he would consider firing him if he hadn't already fired former FBI Director James Comey. The reason? Because he recused himself from the Russia investigation.

The Times reported that Trump felt he was blindsided by that decision and he hasn't stopped fuming about it since:

In fact, much of the past two months of discomfort and self-inflicted pain for Mr. Trump can be tied in some way back to that recusal. Mr. Trump felt blindsided by Mr. Sessions’s decision and unleashed his fury at aides in the Oval Office the next day, according to four people familiar with the event. The next day was his fateful tweet about President Barack Obama conducting a wiretap of Trump Tower during the campaign, an allegation that was widely debunked.

It's hard to understand why he would be so angry about this unless he believed that Sessions was going to somehow cover for him. Whatever the reason for his pique, Trump is clearly no longer taking legal advice from his attorney general — or any of his lawyers, who have no doubt begged him to stop making any public statements about pending court cases. This is very reckless.

It's not nearly as reckless as what apparently happened at Trump's notorious NATO speech. Politico's Susan B. Glasser has reported that the omission of an affirmation of Article 5, the "all for one and one for all" commitment among NATO countries, was the president's spontaneous decision. The speech he was supposed to give included the standard reference. Indeed, national security adviser H.R. McMaster, Defense Secretary Jim Mattis and Secretary of State Rex Tillerson were reportedly stunned when he didn't say it.

Once again Trump made his staff and appointees appear like fools by making them go out to try to smooth things over after the fact. As I noted last week, their credibility took a major hit at that summit. This week he's blowing off his lawyers and dissing his most loyal Cabinet member, too.

No one has ever been able to "control" Donald Trump. But now it appears that he's becoming so angry and frustrated that he's decided to do the opposite of whatever his advisers recommend, which is foolhardy and dangerous for the entire world. The president of the United States has gone rogue. And nobody knows what to do about it.