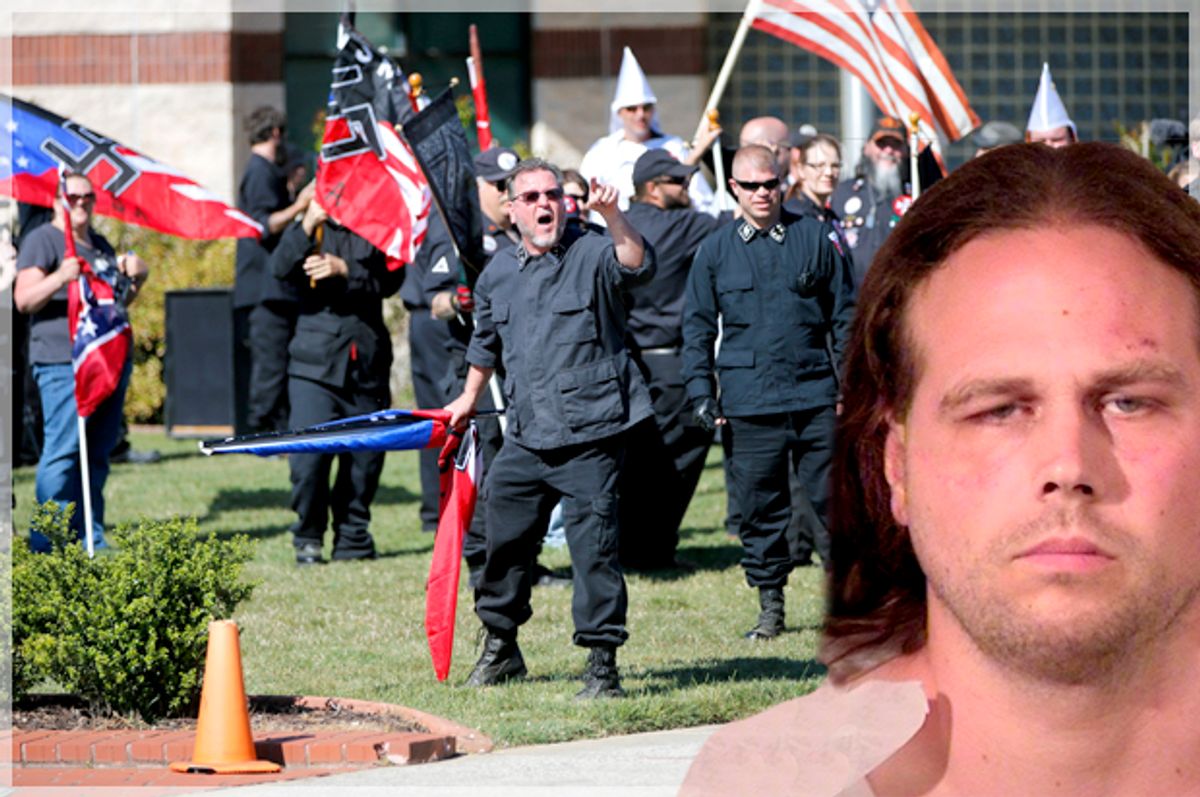 Jeremy Christian, the man accused of murdering two people and seriously injuring another during a May 26 knife attack on a Portland, Oregon, train, is saying things that will sound awfully familiar to anyone who has followed the rise of the "alt-right" in recent months. Specifically, I mean the racist, right-wing factions who have focused on organizing confrontational and sometimes violent street protests on the West Coast.

Christian's court appearances have been marked by much shouting by him, and much of what he's saying sounds like he's directly channeling the talking points promulgated by groups like the Proud Boys, the Oath Keepers, Patriot Prayer and fans of Kyle Chapman, known to his followers as "Based Stickman."

During a court appearance on Wednesday, Christian started ranting about how he's "not guilty of anything but defending myself against violent aggression by Micah Fletcher," the lone survivor among the three men Christian allegedly stabbed after they intervened during his racist tirade against two women on the train.

At his arraignment last week, Christian yelled, "Get out if you don’t like free speech!" and "Death to antifa!" (That's an apparent reference to the left-wing street protesters who call their movement "antifa" for antifascist.)

These outbursts directly echo the top three claims chewed over obsessively by the burgeoning movement of hard-line Donald Trump supporters who are pushing for street protests that often end in violence: 1. Their free speech rights are somehow being suppressed by leftists. 2. They are in constant physical danger from leftists and need to resort to physical violence in self-defense. 3. Antifa protesters — a group of self-styled radicals who embrace a black-clothes-and-bandanas aesthetic — are a serious threat that must be met with suppressive violence.

As I've previously reported for Salon, these talking points are a transparent fig leaf for the real agenda of this loose coalition of hard-right types, who are advancing an authoritarian agenda and intimidating the Trump resistance with a show of violence. So instead of directly defending racist rhetoric like that advanced by Richard Spencer, Milo Yiannopoulos, Charles Murray or Ann Coulter, many of these alt-right types will instead claim to be defending the free speech rights of racist provocateurs, even if in many cases they do so by heckling or attacking leftists exercising their own free speech rights.

Similarly, the claims to "self-defense" are offered in bad faith, as even a casual perusal of alt-right sites demonstrates a strong yearning for violence and the hope that liberals will do something, no matter how slight, that can be used as justification for cracking skulls in. That's why there's this obsession with antifa protesters, as their radicalism and similarly discomfiting willingness to push beyond protest or civil disobedience into vandalism and violence offers the alt-right a convenient excuse.

Christian's alleged stabbing of the three men in Portland — Fletcher survived, but both Ricky Best and Taliesin Namkai-Meche died of their injuries — is the latest in a series of incidents that show that this bad-faith rationalization is leading directly to violence that has no relationship to justifiable self-defense.

In January, 34-year-old Josh Dukes was shot during protests outside a Milo Yiannopoulos speech at the University of Washington. Elizabeth and Marc Hokoana were arrested, with Elizabeth being accused of pulling the trigger. The couple claimed they acted in self-defense, but prosecutors and witnesses say they were deliberately trying to start fights in hopes of creating a pretext for violence and that Dukes was trying to de-escalate the situation when he was shot.

At an April rally in Berkeley, California — billed as a generic "free speech" rally — white supremacist Nathan Damigo was caught on video punching a 95-pound woman named Emily Rose Marshall. Damigo has become an inspirational figure for the alt-right since then. Openly praising his white supremacist views is still politically toxic, but painting him as a champion of free speech and self-defense gives cover to the desire to worship a violent neo-Nazi as a hero.

Christian's alleged actions are the most disturbing sign yet of what can happen when the internet is flooded with people who exalt fascist violence by claiming it's necessary to defend free speech.

Of course it's true that most of the right-wingers drinking from this fire hose of racist paranoia aren't taking it to the next level (yet, anyway), and Christian gives every impression of being a highly disturbed person. But the possibility that he may be mentally ill should not let those who fed him the rhetoric off the hook.

For one thing, the Portland attack is only the most extreme example in a series of incidents involving right-wing activists who suffer from the delusion that their free speech rights are under some kind of violent assault. Just as important, mentally unwell people who act out violently aren't living in a vacuum. Reading buckets and buckets of overblown, paranoid rhetoric about "free speech" and "self-defense" on the internet is exactly the sort of thing that can compel an already unstable person to spin further out of control.

The alt-right has prospered by spreading a specific narrative: Left-wingers are attacking free speech by targeting people they say are racists, nd the only way to preserve free speech is to defend this speech with violence. That comports with the story that Christian appears to be telling himself: He was spewing racist hate speech against two young women on that train (though only one, in fact, was a Muslim), he was confronted, and he interpreted that as an assault on his free speech that had to be answered with lethal violence.

The irony here is that of course alt-right racists have untrammeled free speech, which is how they were able to communicate the ideas that Christian is using to justify his apparent crimes. But "free speech" is just the cover story, and what's lurking underneath is a much more toxic message of racism, authoritarianism and potentially deadly violence.