The Comey-Corbyn axis: Old-school politics makes a dramatic comeback in a history-shaping week

The ousted FBI director and the bearded English socialist make history on the same day. Yep, there's a connection 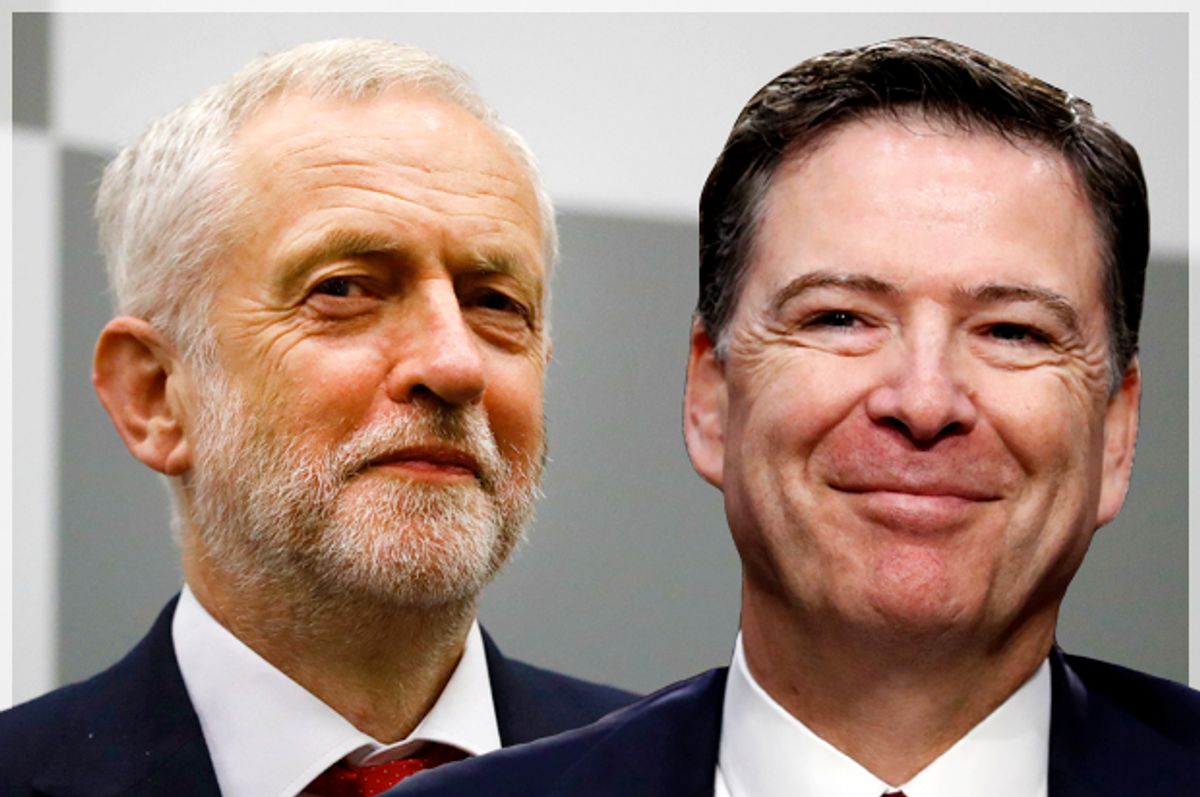 Old-school institutional politics made a dramatic comeback this week, in two disparate and seemingly disconnected events on opposite sides of the Atlantic. In Washington, former FBI Director James Comey testified before the Senate Intelligence Committee, holding the nation spellbound in perhaps the most momentous Capitol Hill hearing since the days of Sen. Sam Ervin’s Watergate committee. Across the pond later the same evening, British Labour Party leader Jeremy Corbyn — widely derided as an outmoded relic of the Old Left — inflicted an enormous symbolic defeat on Prime Minister Theresa May and the ruling Conservatives, in an election they had expected to win big.

Both events carried an intriguing flavor of “almost but not quite,” which is part of their allure but also adds considerable suspense to the plot. Legal scholars will no doubt continue to debate the possible ramifications of Comey’s testimony about what President Donald Trump did and did not tell him, but Comey himself was careful not to say that he believed Trump had sought to obstruct justice — and in any case that’s not the relevant standard. There is considerable consensus that an incumbent president cannot be charged with a crime; the constitutional remedy in such cases is impeachment and removal from office. Did anything emerge from Thursday’s hearing that would cause the Republican Party — which will control both houses of Congress for at least the next 18 months — to consider that remedy seriously? That question answers itself.

As for Corbyn and the Labour Party, they did not win a majority in the House of Commons in Thursday’s British general election, nor did they come close enough to forge a coalition government. But rarely in political history has a second-place finish been a bigger surprise, or felt more like a rousing victory. May and the Tories called this “snap election” a few weeks ago believing that Labour was marginalized, divided and on the ropes; they hoped for a sweeping post-Brexit mandate, and pundits suggested they might emerge with a majority of 50 seats (or 80, or 100) in Britain’s 650-seat Parliament.

Many such pundits were nominally Labour supporters, which is the part that may seem baffling to American observers. Corbyn has frequently been compared to Bernie Sanders, and for good reason: He won the party leadership (twice) with the enthusiastic support of Labour’s voter base, especially younger people. But Labour’s elected officials, bureaucrats and think-tank types have viewed him all along as an irresponsible radical whose promise of a return to pre-Maggie Thatcher socialism was a surefire prescription for electoral disaster. It wasn’t just that such people believed Corbyn would fail; many Labour moderates hoped he would, thus opening the way for them to reconquer the party and steer it back toward the supposedly responsible, capital-friendly, Tony Blair middle-way politics of the 1990s.

Instead, Corbyn bought a necktie, got a haircut, promised he wouldn’t overthrow the monarchy and conducted a remarkably effective campaign around the extraordinary notion that 30-plus years of fiscal austerity, widespread privatization and worsening inequality have not made life in Britain better for most people. Even the terrorist attacks in Manchester and London did not help the Tories, amazingly enough, and may have exposed the weakness and confusion of Britain’s lackey-to-America foreign policy.

In the end, Theresa May’s supposedly brilliant maneuver will go down in history as a massive blunder. Instead of gaining seats, May lost the slender majority she previously held, and will try to hold onto power — tenuously, and for the moment — by forming a desperate and potentially dangerous alliance with the Democratic Unionists, a tiny rear-guard party representing Northern Ireland’s Protestants.

Corbyn, whom Salon’s London correspondent Laurie Penny has hilariously described as a “weaponized geography teacher,” is suddenly not yesterday’s man but the triumphant leader of a reawakened British left. The Labour centrists, and the trans-Atlantic chorus of sensible, grownup columnists who echoed their tut-tut analysis about the unelectable bearded Trotskyist, face a simple task: Shut the hell up.

Although the political circumstances and ideological content of these two globe-rattling stories were quite different, they could be said to represent facets of the same phenomenon: the enduring power of two-party politics amid an era of tremendous instability and change. By the admittedly rock-bottom standards of contemporary Washington, that Intelligence Committee hearing on Thursday was a display of bipartisan comity and courtesy. Even the Republican senators on the panel — despite having long ago sold their souls for a share of power, by way of the White People’s Incoherent Hypocrisy Party — seemed to grasp the gravity of the occasion, after their own limited fashion.

Sure, Trump loyalists like John Cornyn of Texas and Jim Risch of Idaho (the latter of whom I couldn’t have picked out of a police lineup before this week, and probably still couldn’t) gestured vaguely at defending the president, largely on the grounds that he hadn’t actually threatened to have Comey’s family killed and/or is a complete buffoon. But you could tell their hearts weren’t in it. Republicans’ most effective strategy, if you want to call it that, was a mixture of deflection, nostalgia and not-so-secret signals to the base: Mr. Comey, do you remember when Loretta Lynch did that thing that time? That was totally uncool too, am I right?

In Britain, the second most striking thing about the election results, after Labour’s unexpected 32-seat surge, is that both major parties actually increased their share of the national vote, relative to the last election in 2015. Labour’s gains were more dramatic and also more efficiently spread out across the country, enabling the party to win many swing districts (or “marginal seats,” in British parlance). But the Tories piled up large majorities across what is sometimes called “middle England” — the affluent south, the Midlands and the outer suburbs of London — mostly in seats they were going to win anyway. They even gained a dozen or so seats in Scotland, while losing roughly twice that number elsewhere in Britain. Taken together, Labour and the Conservatives won about 81 percent of the vote, in an election many observers thought would reflect Britain’s increasing political fragmentation.

Meanwhile, the Scottish Nationalist Party lost 19 of its 54 seats, which will surely complicate the “Braveheart” drive toward Scottish independence. The centrist Liberal Democrats, who keep promising that one day the British public will embrace their brand of bland, dog-owning, sexless neoliberalism, remained plucky but irrelevant. The Green Party’s lone member of Parliament held her seat, while the Trump-loving, pro-Brexit U.K. Independence Party, having outlived its brief historical moment, remained on par. (That is, at zero.) As I mentioned earlier, the 10 seats won by the Democratic Unionists — effectively a single-issue party devoted to keeping Northern Ireland in the U.K. and protecting the privileges of its Protestant majority — are all that stand between Theresa May and political oblivion.

One could certainly argue that this week’s events undermine the thesis I’ve previously proposed that we are living through something like a new Age of Revolution -- an attenuated copy of earlier, more obvious versions in the mid-19th century and the aftermath of World War I. If America’s political institutions are beginning, in their slow and lumbering way, to address the crisis posed by Trump’s presidency, and if traditional left vs. right oppositional politics have suddenly returned in Britain, those do not seem at first glance like signs of widening chaos.

OK, maybe. But I think it’s too early to read the long-term significance of the Comey-Corbyn axis, and every time the pundit class announces that at long last the zombies have been vanquished and normalcy has been restored I feel the urge to bar the door and load the shotgun. If we’ve learned anything at all from the last two years or so of Western political history, it might be the famous maxim of Hollywood screenwriter William Goldman: Nobody knows anything. In both of these cases, we see the norms and conventions of political discourse colliding with the rapidly shifting contours of political reality, with unprecedented and unpredictable consequences.

I feel absolutely no compassion for Republican members of the House and Senate, who have made their beds — stuffed with venomous spiders, in Count Dracula’s castle — and now must lie in them. But you could feel the discomfort among the GOP caucus on Thursday: They are wedded to a president they cannot afford to defy, because his legions of delusional followers will apparently never give him up. But most leading Republicans never liked or trusted Trump in the first place, and with every passing day he appears more indefensible, more unstable and more uncontrollable. There's no imaginable universe in which they actually impeach him, but they barely even pretended to rebut James Comey’s central point: Whether or not this guy did anything illegal, he’s a despicable human being who is grotesquely unqualified for the office he holds.

It’s a nearly perfect “no exit” scenario for Republicans, who are now waking up to the fact that they supposedly control the entire government but can’t get anything done, thanks to a scandal no one will ever understand and a president with an unparalleled ability for self-sabotage and a world-historical level of incompetence. As I’ve suggested over the previous two weekends, whether the conflicted and confused Democratic Party — still arguing, in the mode of medieval theology, about which of the 30 kinds of cluelessness that led to Hillary Clinton’s defeat was most important — can patch up its identity crisis well enough to profit from this situation is by no means clear.

Of course it’s tempting to argue that the Corbynista demi-victory in Britain should serve as an object lesson for the American electoral left. It might! Certainly the Sanders faction of the Democratic Party wasted no time in drawing the parallel, and there's no question that Theresa May's overconfident, overly cautious and thoroughly message-free campaign bore more than a passing resemblance to Hillary Clinton's.

But it's also true that the two nations have distinctive political cultures, and nothing like the deep-rooted tradition of British socialism has ever existed here. In any case, whether or not to emulate the Corbyn model strikes me as a secondary question, or perhaps a proxy for a bigger one: What kind of politics do we want? The real lesson on offer this week was perhaps not about left or right, not about winning or losing. It might be about risk and courage, about standing up for a set of principles that haven’t been focus-grouped to death. It was about saying something, even (or especially) when the rules of the game suggest you shouldn't.

James Comey and Jeremy Corbyn likely have very little in common, but both of them spoke truth to power this week, to borrow the old cliché. They made that power look small and ridiculous, and they will be remembered for it long after their adversaries have faded into the footnotes of history.