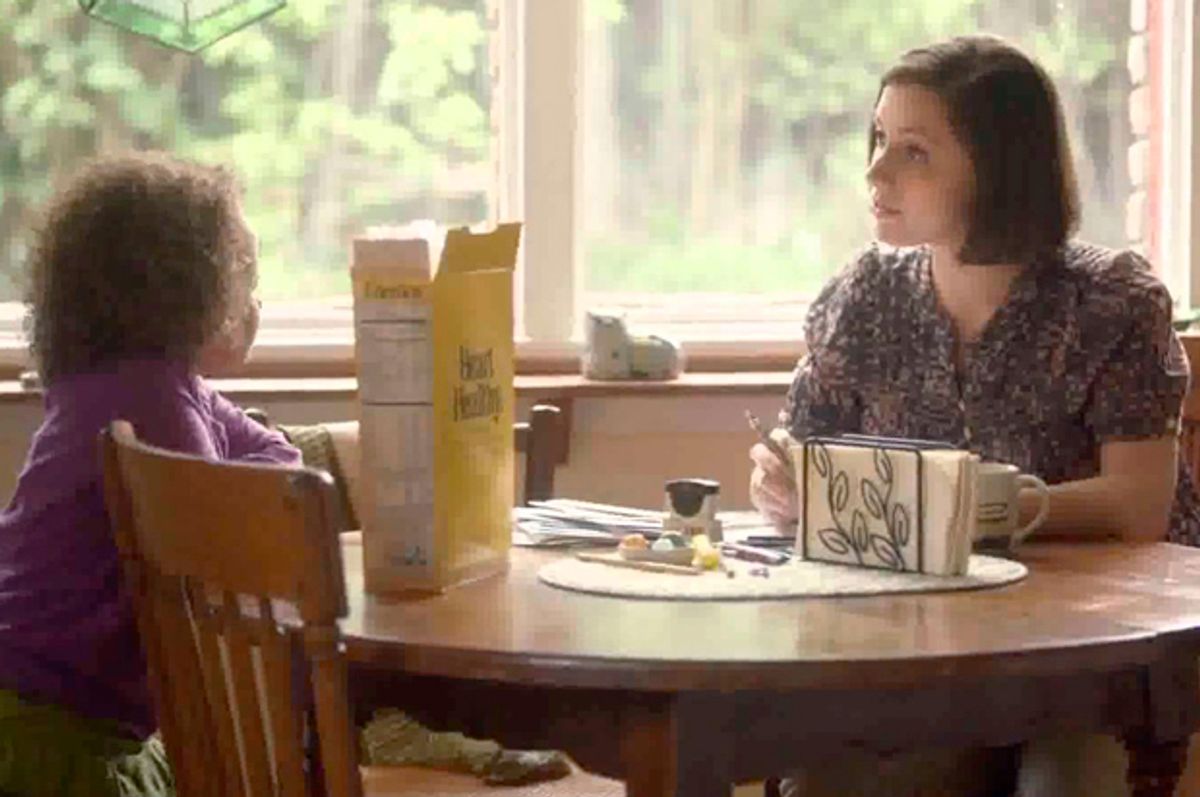 Excerpted from "Loving: Interracial Intimacy and the Threat to White Supremacy" by Sheryll Cashin (Beacon Press, 2017). Reprinted with permission from Beacon Press.

In a 2013 Cheerios cereal commercial, a biracial girl with a mop of golden curls and adorable fat cheeks asks her white mom innocent questions about the heart healthiness of Cheerios, then takes what she learns and dumps Cheerios on her sleeping black father’s heart. The commercial ends with a single-word sentence brought to a close with a Cheerio period, “Love.”

The trolls came out on YouTube, posting nasty comments of “racial genocide” and worse. General Mills, maker of Cheerios, closed the comment section, and much of the discussion about the controversy focused on the reactionaries. But before comments were closed, those who clicked an upward thumb to signal their approval of the ad outnumbered those who disliked it by about nineteen to one.

A year later, General Mills aired an ad during the Super Bowl. In the commercial, the same father gingerly uses Cheerios to explain to the same moppet, Gracie, that a baby brother is on the way. Gracie looks at her father and visibly pregnant mother, then advances another Cheerio on the kitchen table to insist, successfully, that this family lineup will also include a puppy. Again, more people laughed and approved than those who choked on hate. Nonfragile, emotionally secure people move on.

Multiracial families have become de rigueur in advertising for companies that wish to convey that they are open to all customers or to signal hipness to their brand. Or the companies are playing racists like a fiddle, benefiting from the free viral publicity their intercultural ads sometimes create when trolls object. The world they depict — happy, laughing people of different colors and hair textures having a party, raising glasses as they wear cool stuff, inhabit mod furnishings, eat from neon plates — is idealized, but some people are buying it. It is hard to know whether this trend is the beginning of a new normal or a marketing fad. The Cheerios ads and other unambiguous depictions of interracial families are a clear departure from what was standard even five years ago.

Viewers can now see many interracial couples in dramas and sitcoms, and this may have contributed to the transformation in public attitudes about such couples. We have traveled far from 1968, when Captain Kirk boldly went where no white man had gone before on television. According to the camp script for episode 65 of "Star Trek," sadistic “Platonians,” who modeled themselves on Ancient Greeks, controlled the minds of members of the starship Enterprise. The Platonians made Captain Kirk and Lieutenant Uhura kiss against their will, and they breathlessly suffered through it. It was the first time on American TV that a white and black person kissed in prime time. Originally, Spock was supposed to kiss Uhura, but the actor William Shatner insisted that he wanted to do it. So that studio executives would be forced to air the kiss, Shatner purposely crossed his eyes in the tandem, non-kiss version the director shot. The then small band of Trekkies loved this lurch to a new frontier. Others were scandalized. In the South, where miscegenation laws had just been struck down by Loving, NBC executives considered blacking out the kiss but ultimately aired it.

By the 2000s, viewers were experiencing an explosion in portrayals of interracial couples on television. A five-week content analysis of shows on major networks in 2004 found that 21 percent of shows portrayed an interracial liaison. That was a year before Shonda Rhimes aired her first multiracial hit show, "Grey’s Anatomy," in which residents and surgeons of different colors and sexualities save lives at a fictional Seattle hospital, depend on one another, and have a lot of sex. The show, currently in its thirteenth season, was groundbreaking primarily because it reflected the lens through which Rhimes, an African American, sees. In her world, successful people of color run things and are three-dimensional, sexual beings.

There are several dimensions of interracial intimacy reflected in the six successful television shows produced by ShondaLand, Rhimes’s production company. Four of these shows still air, with impressive ratings and loyal audiences. In ShondaLand, interracial couples are common and some are married: Korean woman and black man; mixed-race black man and white Christian woman; Latina and white man; Latina and white lesbians; black woman and white, wheel-chair-user man; black woman and white man who is president of the United States; black man and white woman; bisexual black woman and white lesbian — the list and combinations go on. Two popular characters, Olivia Pope of "Scandal" and Annalise Keating of "How to Get Away with Murder," are African American female leads who order their minions of different colors around and drop their panties with white and black lovers a lot more frequently than their real-life or TV mothers would probably prefer. Interracial sex is so common in ShondaLand that any regular watcher surely is inured to it.

Beyond interracial sex, in ShondaLand, people of different colors and sexualities live together, struggle through crises together, argue, eat meals, get drunk, and cry together. For ten seasons, Dr. Cristina Yang, a Korean American, was the “person” of Dr. Meredith Grey, a white American, and vice versa. On air, they shared an emotional intimacy that was as deep as sisterhood, understanding and tolerating each other’s irritating neuroses. What characters in ShondaLand did not do was discuss race or racial challenges, at least not directly — a criticism raised by commentators on the interracial relationships that are depicted in television. Rhimes answers that she wanted to make her statement by “making a television show that I wanted to watch and part of that was putting people of all colors in it so that you saw people like you on television.”

Another criticism of "Grey’s Anatomy" and other shows like it is that interracial relationships are often depicted as hypersexualized, deviant, or dysfunctional. Critics and interracial couples argue that there are “virtually no representations of happily married middle-class interracial couples raising their two children in the suburbs.” This is a fair point, but most shows with interracial casts are marketed to younger people for whom marriage and suburban child-rearing are increasingly alien lifestyles.

I suspect we will eventually enter a phase of maturity in which depictions of interracial couples are so varied that some get to be mundane. ShondaLand changed the way many small-screen content producers think about casting. American popular culture increasingly depicts a multiracial pluralism. We are not where we should be in the representation of myriad racial and cultural experiences, but diverse representations are increasing and perhaps accelerating. Many outlets feel pressure, as they should, to reflect people who had been here for centuries or a while, contributing to the American story — people who are no longer willing to hide in plain sight.

The explosion continues, with more variation in presentations of interracial couples and less insistence that one of the partners always be white. An article about interracial couples depicted on television and streaming services in 2015 mentioned nineteen shows and highlighted favorites. The hugely popular African American character Cookie of the hip-hop drama "Empire" has a Latino boyfriend, and fans are hoping that her black gay son, Jamal, gets back together with his Latino lover. "Empire," conceived and produced by Lee Daniels, who is black and openly gay, also pushes the envelope in normalizing gay and bisexual liaisons of all flavors. It is the top-rated show for the Fox network. "In Master of None," a show that itself deals with issues of representation of South Asians, the character Dev, after dating many white women, falls in love with Rachel, played by an actress of Latina and Tunisian descent. In other shows, characters paired with whites include a Chinese American, a Filipino American, a Vietnamese immigrant, and, in a sci-fi drama about global characters who share a psychic connection, a black trans woman. The interracial relationships on television vary from innocent first love and a cartoon aimed at children, to nonsexual, unconsummated flirting, to soft porn.

Whatever critics may think of these shows, the depictions help spread dexterity. Social psychologists have documented that extended contact with fictional black-white interracial couples portrayed in media was associated with more positive attitudes toward black people and interracial relationships. Similarly, social psychologists have validated a phenomenon labeled parasocial contact, in which a viewer, exposed to a positive portrayal, fictional or otherwise, can develop such a level of emotional intimacy or affective ties with a member of a minority group that he or she becomes less prejudiced. Coming to know and like a fictional character or, say, a black president of the United States through years of parasocial contact can be particularly transformative for a viewer who has limited real-world contact with a minority group. Exposure to gay characters on television has been shown to reduce prejudice toward gays, for example.

In contrast, many, though not all, who opposed our real-life black president, Obama, seemed to exhibit the fragility DiAngelo theorized. Perhaps nothing in U.S. history upset white centrality more than an African American rising to the presidency. The accusations that he was born in Kenya, that he was a terrible student at Harvard when he graduated magna cum laude and was president of the law review, the “you lie” disrespect at his health-care speech to Congress, the epic obstruction and vilification of him, this and more seem of a piece with the defensive, angry efforts to restore white equilibrium that DiAngelo describes. Meanwhile, Obama’s supporters empathized with him as he faced obstruction, time and again. Through him, blackness was humanized. Many developed an intimate parasocial relationship with a black man for the first time in their lives. They would testify online to the love or admiration they felt for him, and by the end of his time in office, many had grown quite comfortable calling obstruction of him racism.