In a world where women's voices are still being shut out, the confessional essay remains a vital form 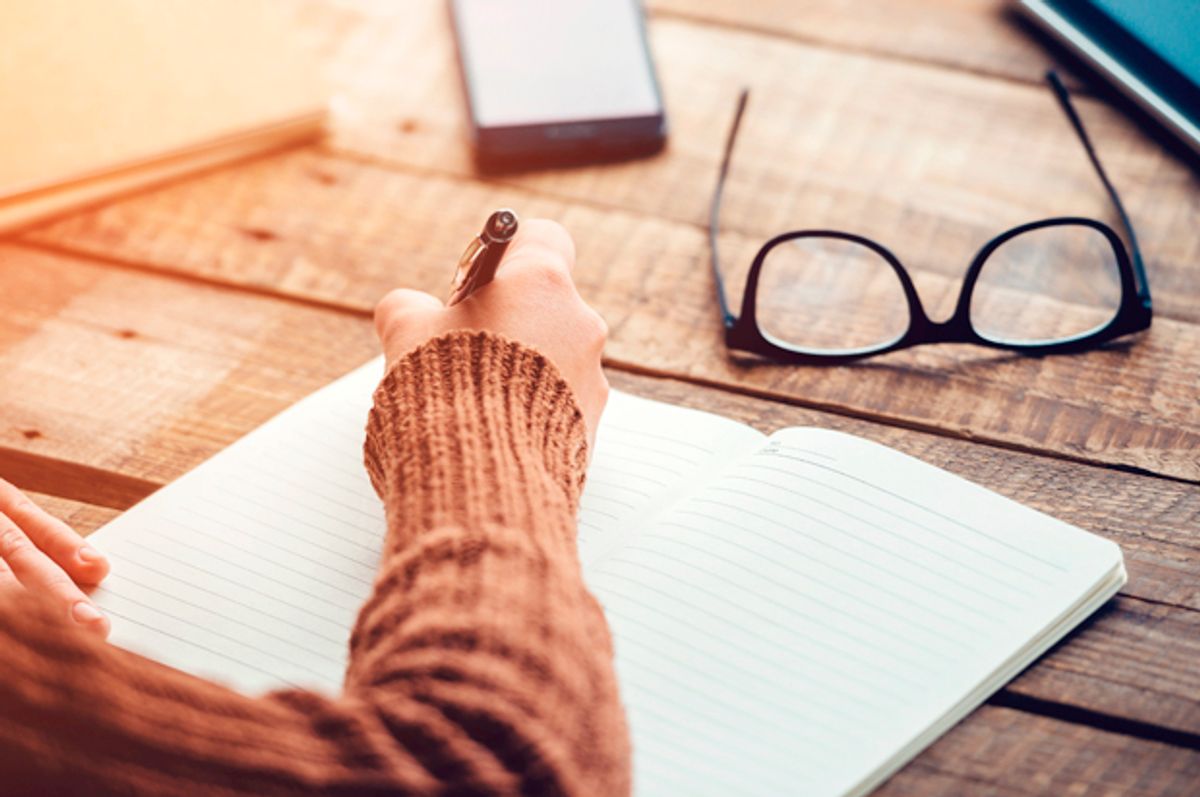 In the fifth episode of Jill Soloway's Amazon series "I Love Dick," titled "A Short History of Weird Girls," we listen and watch as various characters from the show share their most intimate moments of sexual discovery, from protagonist and filmmaker Chris staring dead-on into the camera and recounting humping her stuffed animal as a little girl, and townie artist Devon explaining how she always watched and identified with Dick, the swaggering cowboy of a visual artist and titular object of obsession, when she was young, to Dick's institute curator Paula sharing how she was appalled when she saw her mother’s tampon string, to art historian Toby explaining her fascination with hard-core pornography and history of sexual abuse. As each woman shares her unique experiences, we see the image they have of themselves flickering and glowing, flashing in and out of color, both fragment and flame.

So many essential pieces of feminist film and pop culture draw on different types of collaging — from Maya Deren’s experimental films (which Chris’ character in "I Love Dick" hilariously pushes to the side in favor of big-budget male directors like Steven Spielberg) to the now classic (and controversial) "Vagina Monologues," Eve Ensler's play which is meant to repeat, reimagine, add, delete and combine women’s personal stories. Indeed, two of the most unique and talented female artists today are master collagists: Beyoncé’s expert combining of personal home videos, old family photos, current events, interviews and fragments of poetry in order to tell a story that is both deeply personal and profoundly political, and Lana Del Rey, a singer, musician, and artist obsessed with layering historical found footage alongside masterfully constructed selfies.

Women have always been criticized for sharing their stories, and the more real and uncomfortable they are, the more critics are likely to pathologize the sharer. In some ways, it is miraculous that the book "I Love Dick," written by the real-life Chris Kraus, was ever made into a TV series. From the time it came out, critics complained that it was too attention-seeking and emotional. In a 2015 essay for the New Yorker, Leslie Jamison considered the way that Kraus appealed to a certain type of woman: “I mainly heard about it from smart women who liked to talk about their feelings.”

The fact that smart, intellectually engaged women have the potential to be just as messy, and self-involved, and sex-obsessed, and hungry as anyone else is what drives Soloway’s "I Love Dick," which doesn’t stop at simply exploring Kraus’ story, but instead expands and develops a tapestry of female characters, their needs and wants and fears and dreams. In an early scene, Sylvère, Chris’ husband, is dumbfounded when he learns that Toby, a fellow scholar, focuses on hard-core pornography in her work. “You’re such a child,” he tells her. “I mean, why are you obsessed with porn? Look at you. You’re just so beautiful. So achingly beautiful.”

In a recent essay for the New Yorker, “The Personal-Essay Boom Is Over,” Jia Tolentino describes a shift in the demand for personal essays where women air their dirty laundry and notes that in a world where there are now so many tangible political and cultural concerns, there seems to simply be less space for women to lament about things like their sex lives and grooming habits.

Though Tolentino clearly has great tenderness for the genre, I am wary of the ways that reducing personal essays to the realm of younger, inexperienced writers trying to catch a break in the online publishing market isn’t really fair to the genre as a whole. It also implies, wrongly, that women sharing their experiences is not, in and of itself, a pretty radical thing. In an essay for Forward Magazine, “Taking It Personally: A Defense of the First-Person Essay” Susan Shapiro responds to Tolentino by demonstrating how the genre tends to be dismissed precisely because it is a space where marginalized groups have been able to draw attention to issues outside the mainstream:

As a feminist, memoirist and writing professor with successful students, I wish younger women would have more awareness and less condescension for the revelations of their rising star sisters. White men with big books and bylines get exalted, while smart, witty authors like Emily Gould and my former student Cat Marnell get bashed for their ambition and acclaim. Why is Marnell’s dazzling addiction memoir “How To Murder Your Life” (Simon & Schuster) such a target? Is it uncouth for a woman to admit to wild adventures without proper repentance, while making good money? That’s something addiction authors Bill Clegg, Augusten Burroughs, Jerry Stahl and Peter Hamill were never criticized for.

While Tolentino claims that the internet made the personal essay worse, she ignores the ways that the internet has empowered women to share stories on a far greater scale than ever before. Certainly, in some cases, this has led to half-baked essays that are mere clickbait, but it has also encouraged women to embrace messy storytelling. In particular, I’m interested in the way that the embrace of “provocative” online writing has contributed to a renaissance of female filmmaking that doesn’t strive to be subtle. The female gaze is front and center in shows like "I Love Dick," "Broad City," "Girls," "Insecure," "Chewing Gum" and "Fleabag," provocatively insisting that hunts for tampons and a good laugh and a good fuck are not mere distractions, but actual parts and pieces of being a person in the world.

Where Tolentino sees the end of a boom, what we are instead experiencing is an evolution — of writers being encouraged to not simply mine personal feelings for a quick click, but to make connections between the personal and the political more explicit. This is definitely true in "I Love Dick," which refuses to sanitize female desire, and which, like Beyoncé’s "Lemonade," mines the tremendous possibility in seeing how our individual experiences connect to larger human stories.

At the end of season 1 of “I Love Dick,” Chris gets her period and walks alone into the desert, blood running down her legs, having almost consummated a sexual relationship with the object of her affection, which, to some critics, keeps the focus on Chris’ debasement. Maxine Swann excitedly posits in the Guardian that Chris is “a radical loser,” messy, obsessive, and hedonistic. Alexandra Schwartz of the New Yorker writes that “Soloway’s show has the goofball-loser shtick down pat” but worries that Chris’ character doesn’t go beyond this slapstick performance.

I wrote this essay just a few days after seeing “Wonder Woman,” a film which I also loved, and, which, like many other women, I found to be both heartfelt and empowering. In a world where women’s rights the world over are constantly under attack, seeing Diana save the day was both inspiring as well as a marked return to centering a “likable” female character — strong, sensitive, kind and powerful, liked by men and women alike.

In our current political landscape, it may be tempting to return to these wholly “positive” depictions of female power. In Vogue, Bridget Read laments that "I Love Dick" doesn’t add anything new to a culture that is obsessed with female debasement. “I’m used to being a woman and watching a version of myself flail around on screen, being funny and sexy and gross. So now what?”

It’s understandable that in our current climate, some women would feel frustrated by an insistence on depicting the female experience as intrinsically complicated. I’ve written my own critiques of writing that seems inflammatory for the sake of being inflammatory, or else reduces women into cardboard cutouts of “unlikable” characters. But, to me, "I Love Dick" and the best kinds of female confessional writing and filmmaking are not merely playing with what it means to be a difficult woman; they actively insist that readers and viewers reimagine how we think about difficult female characters, ushering us into a potential world where Chris’ character is allowed to be both a lonely and impulsive woman bleeding through her clothes, and a brave cowgirl striding into the sunset with the promise that she will complete her emotional journey. It’s insisting that our stories, no matter how messy or small, connect to other women’s experiences, and that, in a world where women’s stories are still being shut out or shut down, sharing these stories is never merely personal.