Republican Rep. Steve King traveled to the crime scene to cast blame for the shooting: "It’s coming from the left" 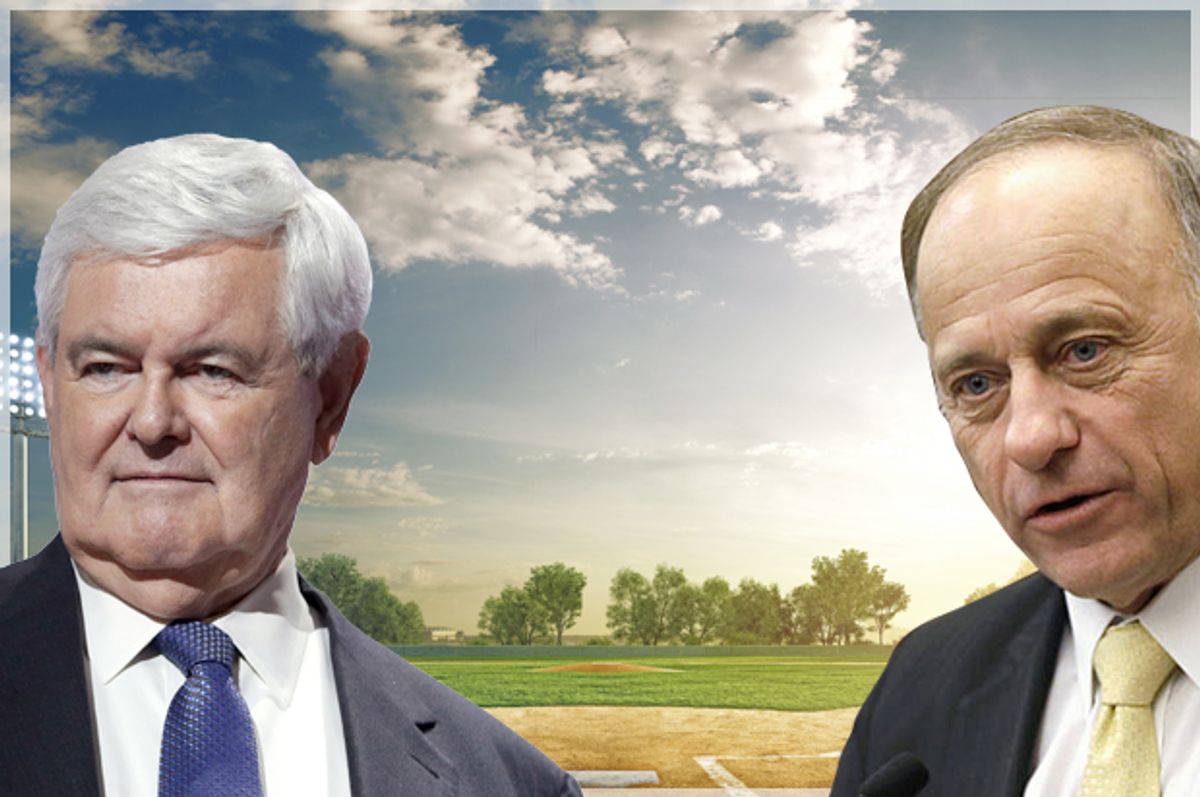 It didn't take long for the tragic shooting at a Republican Congressional baseball practice on Wednesday morning to turn into a partisan blame game. Before the details of the incident were fully clear notable Republicans were quick to jump to conclusions that satisfied their partisan views.

Nearly an hour before local police provided their first official statement, White House senior counselor Kellyanne Conway retweeted an unverified account citing claims that the shooter had asked if those playing baseball were Republicans or Democrats. President Donald Trump's son, Don Trump Jr., took his outrage to Twitter as well and blamed so-called New York elites who have glorified the assassination of the president. Right-wing Iowa Republican Rep. Steve King did not attend Wednesday's practice but traveled to the baseball field after the shooting to tell the gathered media that "the violence is appearing in the streets, and it’s coming from the left.”

On Fox News Rep. Rodney Davis R-Ill., said "political terrorism" in "24-hour news cycle" and "on Twitter" was partially to blame for the tragic incident.

Later on Fox News, former House Speaker Newt Gingrich said the shooting was "part of a pattern" of  what he called "an increasing intensity of hostility on the left."

Some used the tragic event to blame Kathy Griffin for her picture with a decapitated fake Trump head. Others also blamed the Julius Caesar play that has caused a lot of outrage over its depiction of political violence.

The New York Conservative Party blamed the shooting on "hate" fueled by the media, according to the Observer. The party also posted a Fox News article to their Facebook page in which Rep. Ronald DeSantis, R-Fla., said an unknown man had asked him if the Congressman practicing were Republicans or Democrats.

"The man who tried to kill congressmen practicing for a charity baseball game had asked whether the players were Repubs or Dems. When told they were Repubs, the shooter returned a few moments later and opened fire with a rifle," the post on Facebook says. "This is what media bully fueled hate looks like, not wedding cakes and 100-year-old statues."

Of course, this is a common tactic that often comes from right-wingers in the immediate aftermath of a shocking event.

Less than two weeks ago Trump used the London terror attack to bash those who support sensible gun control measures.

The president also quickly blamed a shooting in the Philippines as a terrorist attack, even though it wasn't. No matter what the full details of the tragedy turn out to be, in the wake of a shocking event, it doesn't take long for hyperpartisan rhetoric to emerge with the intent of fulfilling a self-serving agenda.