Even after the rise of Trump and an epidemic of right-wing violence, the GOP twists a tragedy to its own purposes 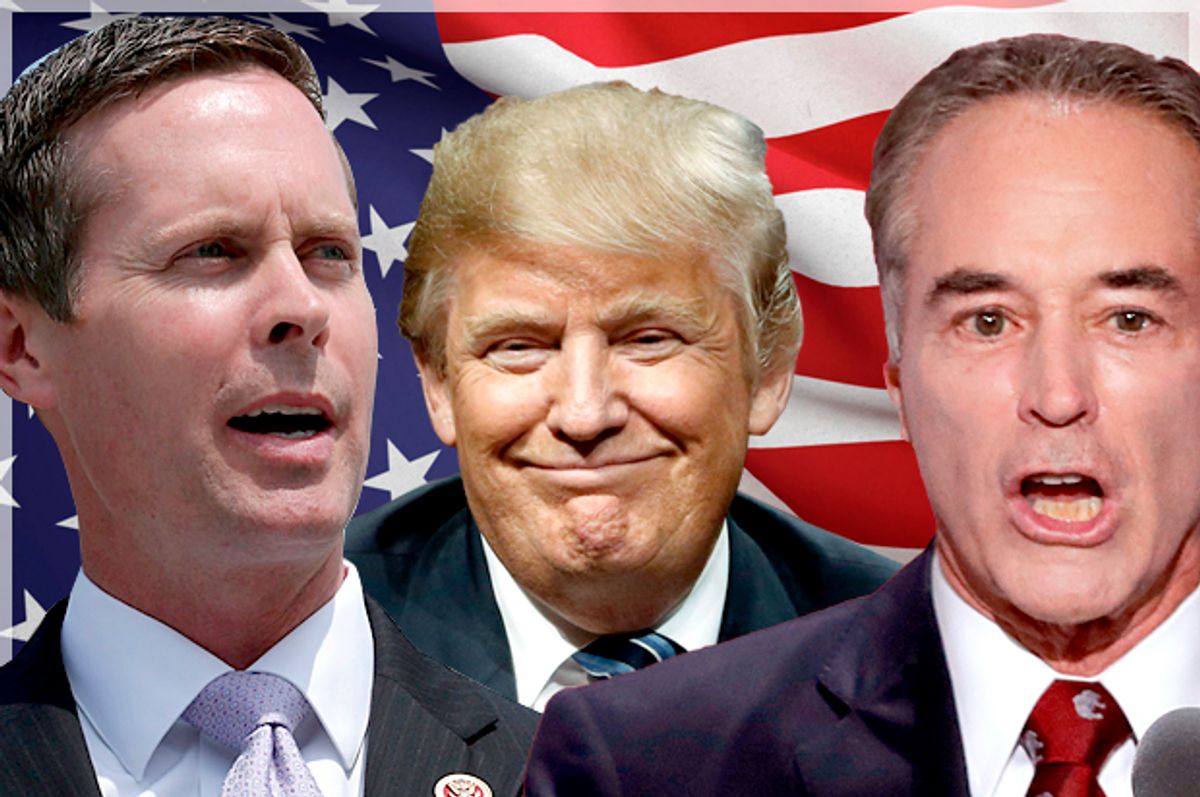 How exceptional is America? We are reminded once again that political violence is part of our national creed and culture and not just something that happens "over there" in distant developing countries or failed states.

On Wednesday during practice for the annual congressional baseball game in Alexandria, Virginia, a gunman opened fire and injured five people, including Rep. Steve Scalise, a Louisiana Republican.

The alleged gunman — who was killed by police at the scene — is James Hodgkinson, 66, from Belleville, Illinois. He is reported to have volunteered for Bernie Sanders' presidential campaign in 2016. The alleged shooter also has a criminal record that includes charges of domestic violence. On social media and in public, Hodgkinson was also highly critical of President Donald Trump and the Republican Party. Immediately after the shooting, Sanders issued a statement and spoke on the Senate floor, disavowing Hodgkinson's actions and condemning political violence.

In the aftermath of a horrible event such as today's shooting in Alexandria, it is easy to focus on the singular act, as opposed to the broader context within which it took place.

President Trump is a plutocratic authoritarian whose leadership style and personal brand are centered upon violent, predatory masculinity. Such behavior by a president helps set the mood for a nation.

Trump has encouraged political violence against his opponents. During his presidential campaign he routinely told his supporters to beat up political protesters. Trump even promised to pay the legal fees of his foot soldiers, whom he told to attack protesters so that they would have to be "carried out on stretchers." He has bragged about being so popular with his voters that he could shoot someone dead in the street and not go to jail for it. He went to far as suggest that if Hillary Clinton won the presidential election, armed insurrection against her administration might be necessary. Donald Trump was endorsed by right-wing terrorist organizations such as the Ku Klux Klan.

In response to the shocking (but not especially surprising) events in Alexandria, there will be obligatory calls for "unity" and "national healing." To fulfill that script, phrases such as "both sides do it" and other examples of lazy thinking and false equivalency will dominate the mainstream public discourse.

This is a result, I believe, of political, rhetorical terrorism. That's got to stop. . . . This political rhetoric and political discourse that has led to hate, has led to gunfire, this has got to stop and it's got to stop today. I'm not going to assess who takes responsibility, but we're all responsible for the discourse that happens in American government. . . . We've got to ratchet down the rhetoric that we've seen. We have to bind together as Americans. Not as Republicans and Democrats.

Rep. Chris Collins, a Republican from upstate New York, struck an even more strident, partisan note. In a radio interview with WBEN, Collins said, "I can only hope that the Democrats do tone down the rhetoric. . . . The rhetoric has been outrageous . . . the finger-pointing, just the tone and the angst and the anger directed at Donald Trump, his supporters."

Such statements by Republicans, of course, ignore the fact that Trump's 2016 campaign and subsequent election triggered a record increase in hate crimes and other violence against Muslims, people of color and Jews in the United States. As documented by organizations such as the Anti-Defamation League, white right-wing domestic terrorists have killed hundreds of Americans since 2007.

The FBI and other law enforcement agencies have repeatedly shown that right-wing domestic terrorism and organizations such as the sovereign citizens movement and other militia groups represent a persistent and dangerous threat to public safety in the United States. In the months since Trump's inauguration, for instance, white supremacists have killed African-Americans in multiple attacks across the country. In late May a white supremacist in Portland, Oregon, also killed two white men (and severely injured a third) who came to the defense of two young women of color whom he was verbally assaulting and threatening on a commuter train.

Threats of violence are the lingua franca and common currency of the right-wing news media. For decades, Democrats, liberals and progressives have been described by the right-wing media using "eliminationist" language such as "subhuman," "evil," "bugs," "snakes" and "vermin" — in other words, as parasites who should be expunged from American society. Such sentiments were echoed by President Trump's son Eric, who said in a recent interview that those who seek to block his father's agenda were "not even people." During the 2016 presidential campaign, Donald Trump described both Muslims and Latin American immigrants as "snakes."

The right-wing echo chamber has also long reverberated with threats of gun violence — against former President Barack Obama in particular and Democrats or liberals in general.

Ultimately, political violence by the left in today's America is noteworthy precisely because it is so unusual. White conservatives are eager to embrace any opportunity to present themselves as angels and victims. The tragic shooting in Alexandria has offered them another chance to obey the old political edict: Whatever you are guilty of, accuse the other side of being worse.