A Netflix show about Pennsylvania — boxing, hoagies and DeVito not included 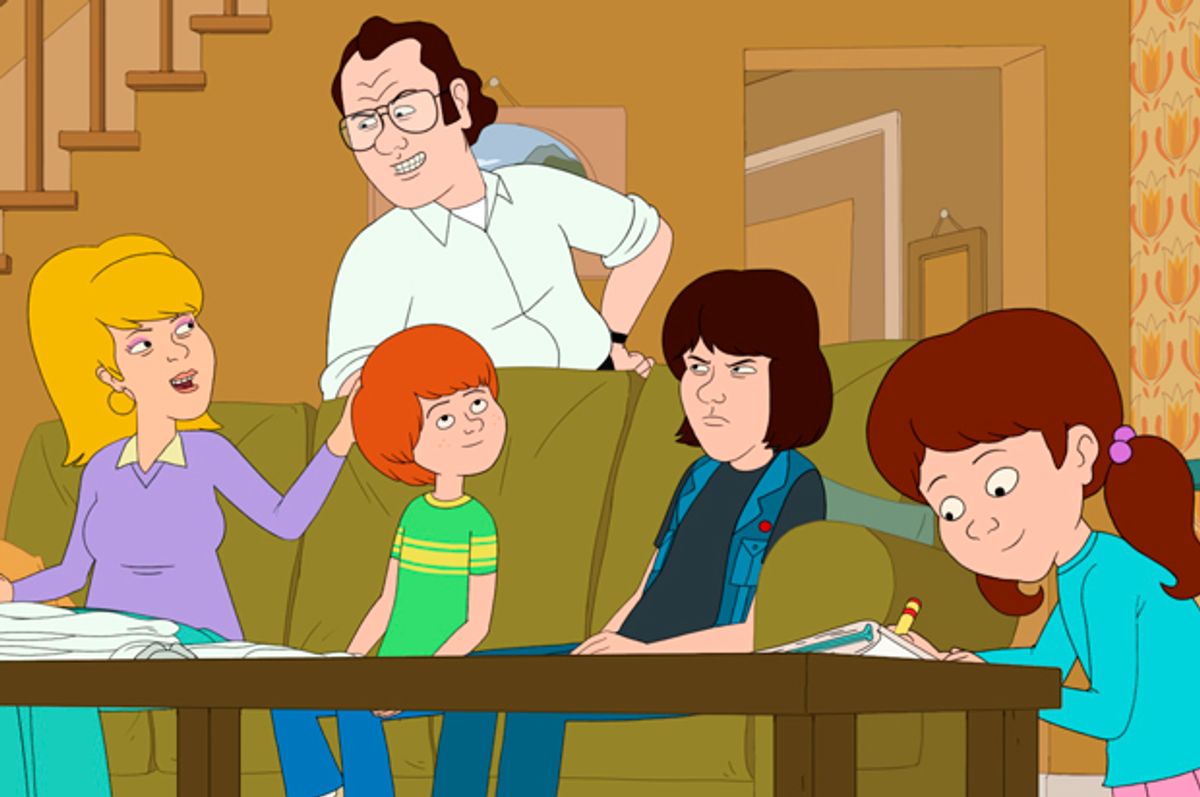 When people discuss the brilliant original programming offered on Netflix — shows like "House of Cards," "Orange Is the New Black" and "Stranger Things" — they conspicuously leave out a show that should be a part of the conversation.

"F Is for Family," an animated sitcom starring Bill Burr and Laura Dern and set in the early 1970s, is one of the best new shows out there, period. It's funny, smart and surprisingly touching. More importantly, it offers one of the most incisive insights into American working-class family life seen on any comedy program since "Roseanne."

It's also, in its depiction of the economic insecurity of a working-class family, a perfect show for Pennsylvanians.

The show is set in the fictitious community of Ryetown, Pennsylvania (there is a Rye Township in the central part of the state, but it is much smaller than the community seen here), a nice change for natives of the state. The Keystone State, despite being the fifth most populous in the country with more than 12 million people, has been surprisingly underrepresented in our popular culture.

Indeed, aside from the Rocky movies, M. Night Shyamalan's oeuvre and the rap lyrics of Will Smith, Pennsylvania is usually associated with the bygone America of the Revolutionary War and Constitutional Convention, both more than two centuries past. Even the two most famous TV shows set in Pennsylvania rarely give off a distinctly "Pennsylvanian" vibe — "It's Always Sunny in Philadelphia" (which I love) is more about depravity than the City of Brotherly Love, and "The Office" is what would happen if you blended "Dilbert" with generic sitcom tropes (I'm less of a fan of that show).

But if you want to truly understand the economic mindset and hardships of Pennsylvanians, look no further than protagonist Frank Murphy (Bill Burr). When we're first introduced to Frank, he's employed at a local airport, first as a baggage handler and then as a manager. Although he is shown to be a flawed character in many ways, there is never any question that he works hard and does his job very well. As a conservative Republican (Murphy makes a passing reference to supporting President Richard Nixon), he naturally expects that his efforts will pay off and he'll continue moving up the corporate ladder.

Instead, because he has the audacity to ask the CEO to show compassion toward striking airline employees, he is fired at the end of the first season.

The second season picks up in the aftermath of Murphy's termination, as his sense of masculinity is threatened by the fact his wife Sue, a Tupperware salesperson, now supports the family. Although he eventually gets a new job stocking vending machines, it's clear that Frank — who still believes a man should wear the pants in the family — suffers from existential angst as well as financial woes over his sudden and drastic humiliation.

These are the kinds of financial struggles and general disappointments that Pennsylvanians understand all too well in the 2010s.

Indeed, it's these struggles and disappointments that I suspect played a key role in Donald Trump's ability to flip the state to the Republican side in 2016, even though its electoral votes had gone to Democratic candidates since 1992.

There are plenty of studies that offer various reasons why Trump pulled off his Pennsylvania upset, but as someone who toured the Lehigh Valley asking ordinary voters about what motivated their decisions, I heard the same answer over and over again:

"We're losing jobs and Trump says he'll bring them back."

Even beyond this single presidential election, the Pennsylvania psyche has been scarred by the memories of steel plants closed — in Pittsburgh and my hometown of Bethlehem — of manufacturers being laid off because faceless CEOs decided to ship their jobs overseas, of families crushed by unexpected poverty, of fathers emotionally destroyed by feelings of failure.

I won't spoil what happens with Frank Murphy and his employment situation, as the show's resolution of that plot thread at the end of the second season is so pitch-perfect that doing so would be criminal. Suffice to say that "F Is for Family" — which offers smart social commentary on a number of issues besides economics, from race and gender to bullying and living with learning disabilities — also contains a special message that is unique to, and explains a lot about, Pennsylvanians.