John McEnroe says Serena Williams would be 700 on the men's tour. Is he right?

Williams is probably the best player in tennis history — does comparing her to the men's side take away from that? 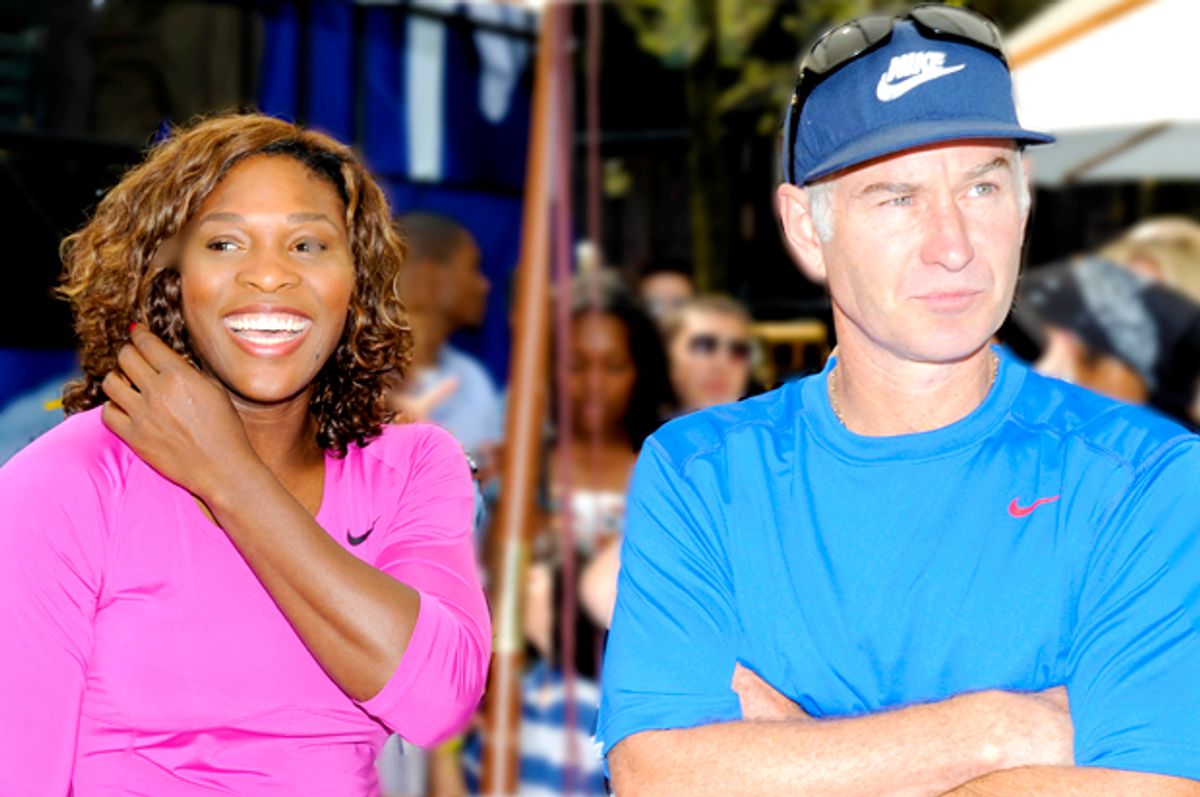 During a taped segment with NPR's Lulu Garcia-Navarro on Sunday, retired tennis great John McEnroe said of the even greater Serena Williams, "If she played the men’s circuit she’d be like 700 in the world."

McEnroe's claims would put Williams in a theoretical dead heat on the ATP Rankings with Egypt's Issam Haitham Taweel, a 27-year-old who has won $52,809 in prize money from singles and doubles contests combined. (Williams has won $84,463,131.)

There are 2,074 spots on the ATP Rankings which were developed by the Association of Tennis Professionals to seed players on the men's ATP World Tour (though there are more than 2,074 players on it as many are tied).

And McEnroe went on to tell Garcia-Navarro that he could beat Williams in a singles match but he wouldn't "want to do it." McEnroe is 58 and hasn't played an official match out of a senior tour since 1992 when he was ranked 20 in the world. Williams, 35, is currently ranked No. 4 on the ATP women's analog, the WTA Tour rankings (though she is taking a hiatus to have her first child.)

McEnroe, pressed on, “I mean my kids don’t think I can beat her anymore.  . . .  Maybe I should get her now because she’s pregnant."

The retired champ explained his stance in more depth:

That doesn't mean I don't think Serena is an incredible player. I do, but the reality of what would happen would be I think something that perhaps it'd be a little higher, perhaps it'd be a little lower. And on a given day, Serena could beat some [men's] players. I believe because she's so incredibly strong mentally that she could overcome some situations where players would choke 'cause she's been in it so many times, so many situations at Wimbledon, The U.S. Open, etc. But if she had to just play the circuit — the men's circuit — that would be an entirely different story.

Generally his comments echo his past statements as well as those of former player Jeff Tarango who said in 2013 that Williams "could test a lot of men on this planet, probably seven and a half billion, but Andy Murray is not one of them. He's way too good for her." Andy Murray, who had challenged Williams to a match, was ranked No. 4 in the ATP that year. Tarago added, that Williams would be ranked "300-350" in the men's tour.

Overall, the comments from both men go down like hard pills. While McEnroe has expressed respect for Williams in the past (and even in his interview with Garcia-Navarro), his statements here are reductive, hyperbolic and dismissive (though they certainly are in keeping to McEnroe's querulous, bristly style). Yet, there is a bit of truth to them.

Given the speed at which men pick up returns in their game, the velocity and power of their serves and the fact that the men's side focuses on aces and ace returns, Williams would be facing a wholly different sort of challenge at a men's event. (The women's game sees more rallies and volleys.) In addition, the high-speed lateral movement required would specifically test Williams as a player since she's struggled with injuries below her knees over the last few years. Finally, Williams' personal game — as is the case with all women's players — is wrapped around the three-set format of the women's tour. The men's game goes to five sets.

Regardless of the fact that Williams is more talented, stronger, determined, experienced and knowledgable than most of the players on the men's tour, it's likely she would never rise into the top 100. More than anything else, Williams' profound experience and familiarity with the women's game — where matches are shorter and returns are picked up more slowly — would hamper her rhythm while trying to acclimatize to her new sport.

Yet, these facts are not the core of the issue here. Actually, they're immaterial. Rather, it's how they were served up.

Garcia-Navarro and McEnroe were discussing whether Williams is the best player in the world. It's a philosophical point that one can bat back and forth.

Yes, many people in the world could beat her in a singles match and, yes, her theoretical experience on the men's tour would probably not equal her unprecedented success on the women's tour (Margaret Court still has more major championships than Williams, but won some of them before the Open Era).

That said, Williams has dominated her sport in a way and to an extent that makes her almost inarguably the greatest tennis champion ever and one of the greatest athletes of all time. That she has had to overcome racial prejudices on her way to that position makes her achievements only that much greater. Diminishing or qualifying that in any way requires embracing bad history and poor, possibly biased, thinking

Garcia-Navarro put it best in a series of tweets after the interview.

Indeed it's not a battle of the sexes. It's not even a battle of the sports. One can certainly say that Muhammad Ali was a better athlete than Derek Jeter despite the fact that one would never want Ali to be on plate during a divisional playoff game late in the ninth inning with two men on base. As a tennis player, Williams is better than most anyone on the men's tour. As a men's tennis player, she's not very good at all. But that's not a relevant or helpful qualifier.

And McEnroe, who has a decent history of promoting the women's game and champions many progressive causes, would probably not disagree with that. He just lacks the tact and the appreciation for speaking about women to women that true feminism demands. A great player and — by all accounts — a good (if difficult) person, McEnroe probably needs to go back to the lab and work on his intersectionality.

Whatever the case, Williams would absolutely destroy McEnroe in a match of three or even five sets. Billie Jean King slaughtered Bobby Riggs in 1973. Martina Navratilova and Pam Shriver destroyed Riggs and Vitas Gerulaitis in 1985. While Jimmy Conners won against Navratilova in 1992, it's been long proved that a woman anywhere near the top of her professional game beats a retired, aging men's pro almost every time.